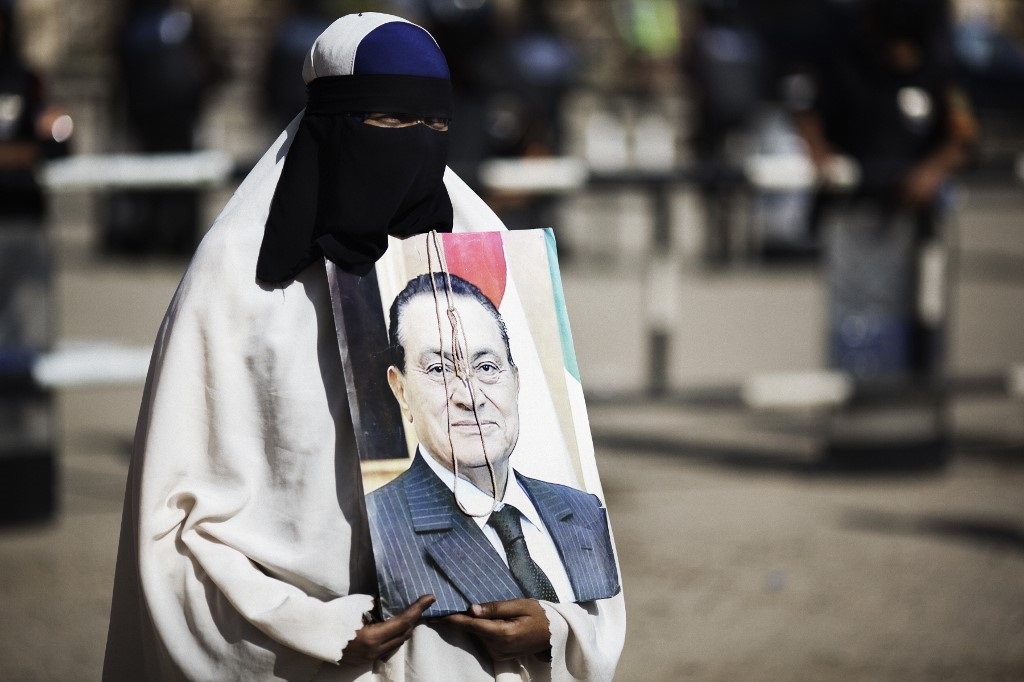 A fully-veiled Muslim Egyptian woman who supports former president Hosni Mubarak (portrait) waits for the verdict to be announced outside the Cairo court.

CAIRO - The administrator of a Facebook page supporting Egyptian ex-president Hosni Mubarak was detained for 15 days for "spreading false information", a judicial source said on Thursday.

Karim Hussein is the administrator of a page named "I'm sorry Mr President", which was created in February 2011 and is followed by more than three million people.

Mubarak was overthrown that month after almost 30 years in power, amid a popular uprising that shook Egypt at the height of the Arab Spring.

Egypt's prosecutor general put Hussein "in detention for 15 days for the purpose of the investigation", the judicial source told AFP.

The team behind the Facebook page said in a statement that Hussein "had been taken away by security services to answer questions related to the page".

The team's statement added that it did not know what content the investigation was focusing on, but noted that the authorities were exercising their inherent right "to question any citizen".

READ: Egypt holds referendum that could keep Sisi in power until 2030

Hussein was detained several days after an archive video was shared on his page in which Mubarak said he refused to cut state subsidies in order to safeguard "the poor citizen".

The video was shared more than 1.5 million times.

President Abdel Fattah al-Sisi's government has implemented unpopular austerity policies since 2016, at the insistence of the International Monetary Fund.

The measures involve drastic cuts to state subsidies and have sparked an outcry by Egyptians.

Sisi, in power since 2014, has been accused by NGOs of cracking down on dissent.

In September 2018, he passed a law that permitted close surveillance of social media accounts with mass followings.

The charge of "spreading false information" is regularly used against dissidents or human rights defenders in the country.

Authorities say they are preserving the security and stability of the country.