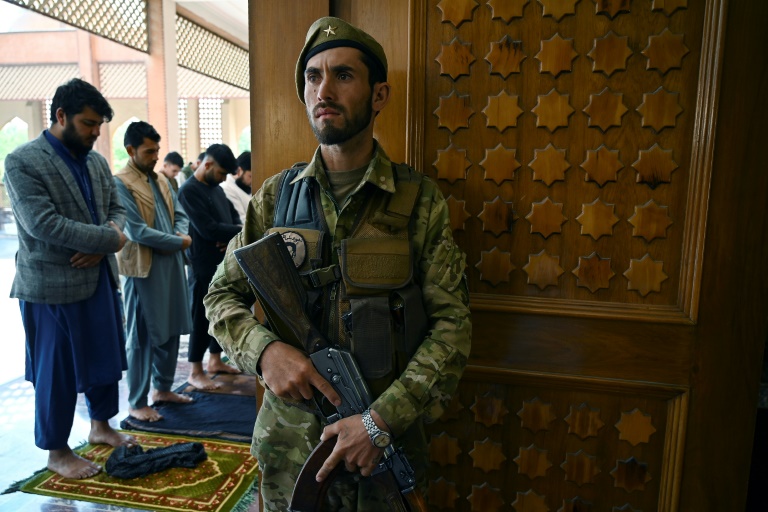 An Afghan security worker stands guard as Muslim devotees offer prayers to start the Eid-al-Fitr festival at a mosque in Kabul. AFP/Wakil Kohsar

KABUL - A three-day ceasefire agreed by the warring Taliban and Afghan government came into force on Thursday as the country celebrated Eid al-Fitr, after weeks of intense clashes.

Proposed by the militants and matched by President Ashraf Ghani, the truce will grant respite for Afghans as they mark the Muslim festival with friends and family.

Violence has intensified in the country since the United States missed a May 1 deadline, agreed with the Taliban last year, to withdraw all of its troops.

If the ceasefire holds, it will be only the fourth pause in fighting in nearly 20 years of conflict.

READ: Biden says 'time to end' US war in Afghanistan with total pullout

Early on Thursday, Afghan men, women and children around the country flocked to neighbourhood mosques or gathered in open grounds to offer morning prayers at the start of Eid festivities that would last until Saturday.

Authorities deployed security personnel to several prominent mosques in the capital Kabul who frisked worshippers as they arrived for morning prayers.

Tens of thousands of Afghans have been killed and millions have been displaced by the nearly two-decade-old conflict, which has seen a resurgent Taliban take hold of large swathes of the country.

The militants and the Afghan government launched peace talks in September last year, but progress has stalled despite international efforts to jump-start the negotiations.