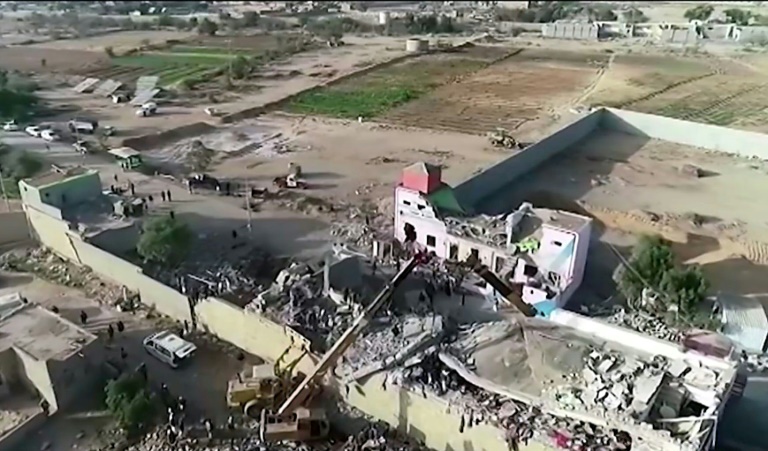 An image grab from a handout video from Yemen's Huthi rebels on January 21, 2022 shows destruction at a prison in the insurgents' stronghold of Saada in northern Yemen after it was hit in an air strike leaving many dead or wounded

SAADA - More than 100 people were killed or wounded in an air strike on a Yemeni prison, rescuers said Friday after a night of deadly bombing underlined a dramatic escalation in violence.

Basheer Omar, the spokesperson for the International Committee for the Red Cross in Yemen, said numbers were still rising following the attack in Saada, home city of the Huthi rebel movement.

"There are more than 100 killed and injured... the numbers are going up," he said, citing figures at two Saada hospitals supported by the ICRC.

Gruesome scenes came to light as rescue workers pulled bodies from destroyed prison buildings and piled up mangled corpses, according to footage released by the Iran-backed Huthi insurgents.

Further south in Hodeida, a rebel video showed bodies in the rubble and dazed survivors after an air attack from the Saudi Arabia-led pro-government coalition took out a telecommunications hub. Yemen suffered a nationwide internet blackout, a web monitor said.

Saada's hospital has received about 200 people wounded in the prison attack and "they are so overwhelmed that they cannot take any more patients", said Doctors Without Borders, known by its French acronym MSF.

"There are many bodies still at the scene of the air strike, many missing people," said Ahmed Mahat, MSF head of mission in Yemen.

"It is impossible to know how many people have been killed. It seems to have been a horrific act of violence."

The strikes come five days after the Huthis claimed a drone-and-missile attack on the United Arab Emirates that killed three people and prompted warnings of reprisals.

The United Nations Security Council is due to meet at 1500 GMT on Friday in an emergency session on the Huthi attacks against the UAE, at the request of the Gulf state, which has occupied one of the non-permanent seats on the council since January 1. 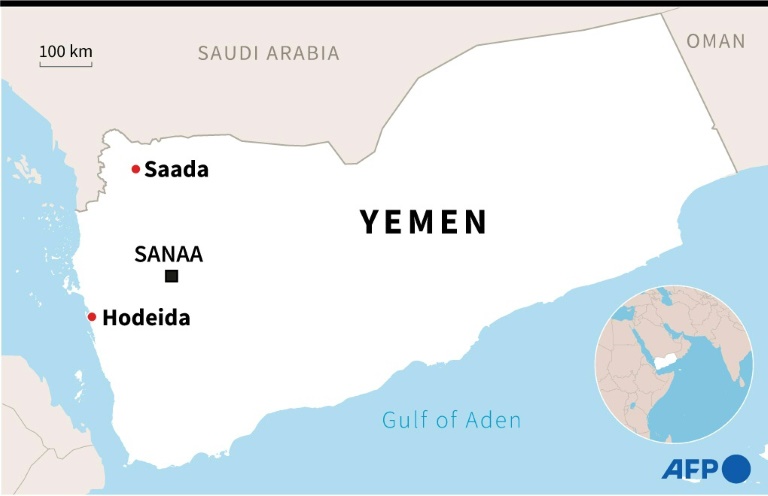 The UAE is part of the Saudi-led coalition that has been fighting the rebels since 2015, in an intractable conflict that has displaced millions of Yemenis and left them on the brink of famine.

The coalition claimed the attack in Hodeida, a lifeline port for the shattered country, but did not say it had carried out any strikes on Saada.

Saudi Arabia's state news agency said the coalition carried out "precision air strikes... to destroy the capabilities of the Huthi militia in Hodeida".

Yemen's civil war began in 2014 when the Huthis descended from their base in Saada to overrun the capital Sanaa, prompting Saudi-led forces to intervene to prop up the government the following year.

Tensions have soared in recent weeks after the UAE-backed Giants Brigade drove the rebels out of Shabwa province, undermining their months-long campaign to take the key city of Marib further north.

On January 3, the Huthis hijacked a United Arab Emirates-flagged ship in the Red Sea, prompting a warning from the coalition that it would target rebel-held ports.

And on Monday, they claimed a long-range attack that struck oil facilities and the airport in the UAE capital Abu Dhabi, killing two Indians and a Pakistani, and wounding six other people.

The attack -- the first deadly assault acknowledged by the UAE inside its borders and claimed by the Huthis -- opened up a new front in Yemen's war and sent regional tensions soaring.

In retaliation, the coalition carried out air strikes against rebel-held Sanaa that killed 14 people.

Yemen's civil war has been a catastrophe for millions of its citizens who have fled their homes, with many close to famine in what the UN calls the world's worst humanitarian crisis.

The UN has estimated the war killed 377,000 people by the end of 2021, both directly and indirectly through hunger and disease.

UAE presidential adviser Anwar Gargash warned the country would exercise its right to defend itself after the Abu Dhabi attack.

"The Emirates have the legal and moral right to defend their lands, population and sovereignty, and will exercise this right to defend themselves and prevent terrorist acts pursued by the Huthi group," he told US special envoy Hans Grundberg, according to the official WAM news agency.