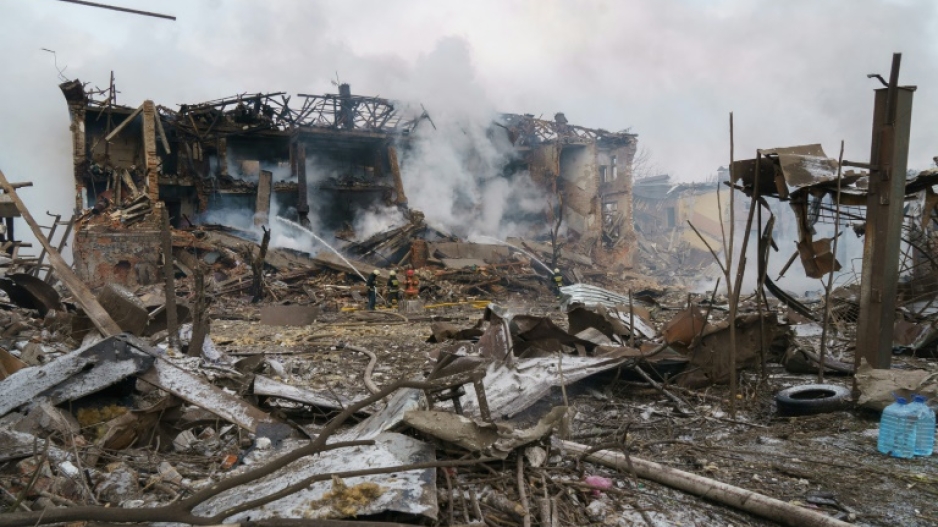 Firefighters spray water on a destroyed shoe factory following an air strike in Dnipro on March 11, 2022

KYIV, Ukraine - Russian forces upped the pressure on Kyiv Saturday and pummelled civilian areas in other Ukrainian cities, amid fresh efforts to get aid to the devastated port city of Mariupol.

Russian strikes destroyed the airport in the town of Vasylkiv, south of Kyiv, while an oil depot was also hit and caught fire, the mayor said.

The northwest suburbs of the capital, including Irpin and Bucha, have already endured days of heavy bombardment while Russian armoured vehicles are advancing on the northeastern edge.

Kyiv Mayor Vitali Klitschko said the capital, described by a senior Ukrainian official Friday as a "city under siege", was reinforcing defences and stockpiling food and medicine.

Buses were continuing to bring refugees into the city from the hard-hit suburbs, Klitschko said in a video message, adding: "We will not give up."

Other cities have already fallen or been surrounded since Russia invaded its neighbour on February 24, with civilians targeted in what the United Nations warned could amount to war crimes.

The southern port city Mariupol in particular is facing what Ukraine says is a "humanitarian catastrophe", with than 1,500 civilians killed over 12 days of siege.

A humanitarian convoy loaded with 90 tonnes of food and medicine left the town of Zaporizhzhia for Mariupol on Saturday, according to local officials, with hopes that it will be able to evacuate civilians on the way back.

Ismail Hacioglu, president of the Suleiman Mosque Association in Mariupol, said he was trying to evacuate almost 90 Turks in the city, but four times had been stopped at Russian roadblocks.

He denied a claim by Ukraine's foreign ministry that Russia had shelled the mosque where 80 civilians were sheltering, telling Turkish TV the area was hit but not the mosque itself.

Some evacuation efforts have been successful. Ukraine's emergency services said 487,000 people had been evacuated over the past 24 hours, including 102,000 children. 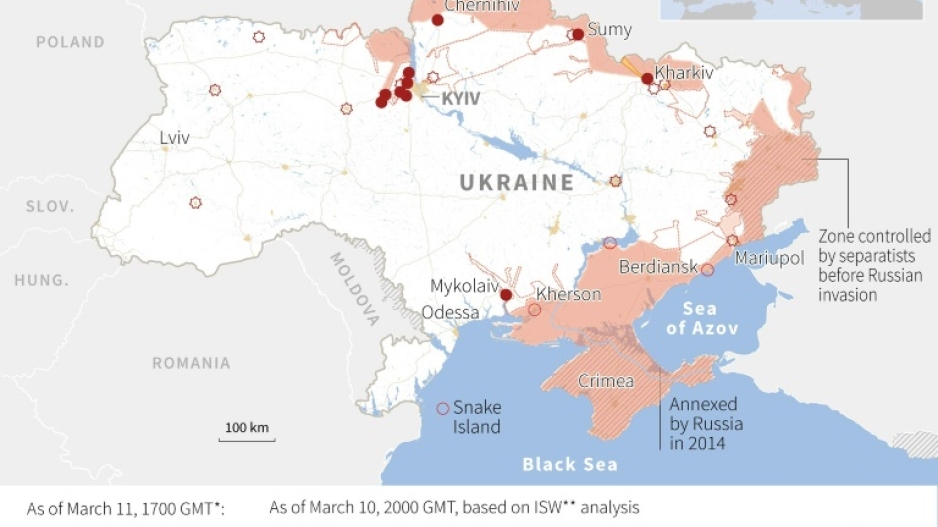 The United Nations estimates that almost 2.6 million people have fled Ukraine since the invasion, most of them to Poland, in Europe's worst refugee crisis since World War II.

As Russia widens its bombardment and talks between Moscow and Kyiv seemingly go nowhere, Zelensky's pleas for NATO to intervene have grown increasingly desperate.

Washington and its EU allies have sent funds and military aid to Ukraine, taken action against its economy and oligarchs, and a cultural and sporting boycott has further isolated Moscow.

In Irpin on Saturday, a Ukrainian soldier who gave his name just as "Viktor" showed off his British anti-tank missile system and the twisted remains of a Russian vehicle it destroyed.

"This one was shot from this beautiful thing," he said. "And I want to say a big thank you to our British comrades helping us."

But US President Joe Biden again ruled out direct action against nuclear-armed Russia, warning that it would lead to "World War III".

The situation in Mariupol remains "desperate", according to Doctors Without Borders, with no water or heating -- and food supplies dwindling.

"Hundreds of thousands of people... are for all intents and purposes besieged," Stephen Cornish, one of those heading the medical charity's Ukraine operation, told AFP in an interview.

"Sieges are a medieval practice that have been outlawed by the modern rules of war for good reason."

Meanwhile an AFP reporter in the southern city of Mykolaiv said a hospital in the northern district of Ingulski came under fire, while heating is out in the area, forcing many residents to flee.

Mykolaiv, which lies on the road to the strategic port city of Odessa, has been under attack for days.

"They shot at the civilian areas, without any military objective," said the hospital's head, Dmytro Lagochev, adding: "There's a hospital here, an orphanage and an ophthalmological clinic."

In Kharkiv, in the east, doctors at a hospital described spending two days pumping ash from the stomach of an eight-year-old child whose home was struck by a Russian missile.

"He still has cinders in his lungs," Dima Kasyanov's doctor told AFP. 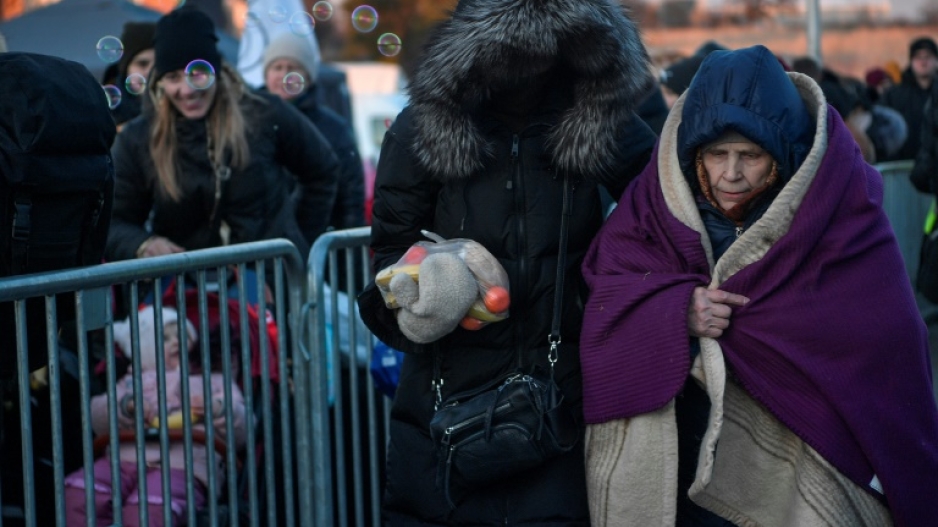 Meanwhile the central city of Dnipro, an industrial hub of one million inhabitants, saw its reputation as a relatively safe haven shattered when three missiles hit civilian buildings Friday.

The attacks on civilians prompted a new flurry of warnings on Friday that Russia is committing war crimes.

The Kremlin has denied it even attacked Ukraine, saying it launched a "special military operation" to stop a direct threat.

Putin on Saturday slammed what he described as the "flagrant violation" of international humanitarian law by Kyiv, accusing Ukraine's army of executing dissenters and using civilians as hostages.

The French presidency denounced his accusations, made during the talks with Macron and Scholz, as "lies".

In a constant stream of video messages, Zelensky has urged Ukrainians to keep fighting and demanded his country's allies do more to help.

On Saturday, he said Moscow was suffering "enormous losses", before giving Ukraine's first toll, saying around 1,300 troops had been killed so far.

US estimates put the number of Russian fatalities at 2,000 to 4,000 while Moscow's only official toll, announced last week, said 498 Russian troops had been killed.

Foreign combatants have already entered the conflict on both sides, and on Friday, the Kremlin ramped up efforts to bring in reinforcements, particularly from Syria. 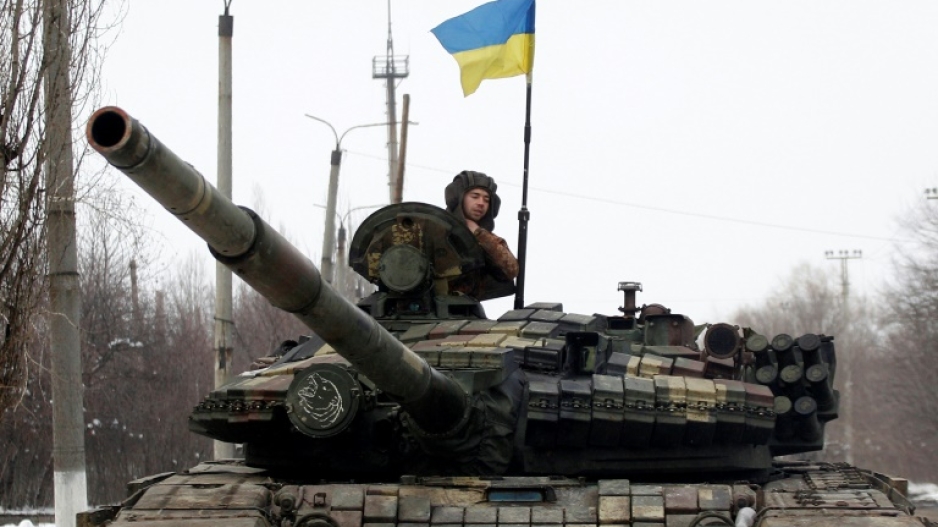 A Ukrainian Military Forces tank seen in the Lugansk region on March 11, 2022

In the Russian-held city of Melitopol, Zelensky said 2,000 people protested against the kidnapping Friday of the mayor.

He called on the leaders of France and Germany to help secure Ivan Fedorov's release, which he said opened a "new stage of terror".

Numerous efforts are underway to find a diplomatic solution to the crisis, with Turkey on Thursday hosting the first talks between the Russian and Ukrainian foreign ministers since war erupted.

There was no breakthrough but Putin said Friday there were some "positive shifts" and that negotiations were being held "almost daily".

US Vice President Kamala Harris said Friday however that Putin had shown "no sign of engaging in serious diplomacy".