All hail the once-controversial halo after Hamilton escapes serious injury 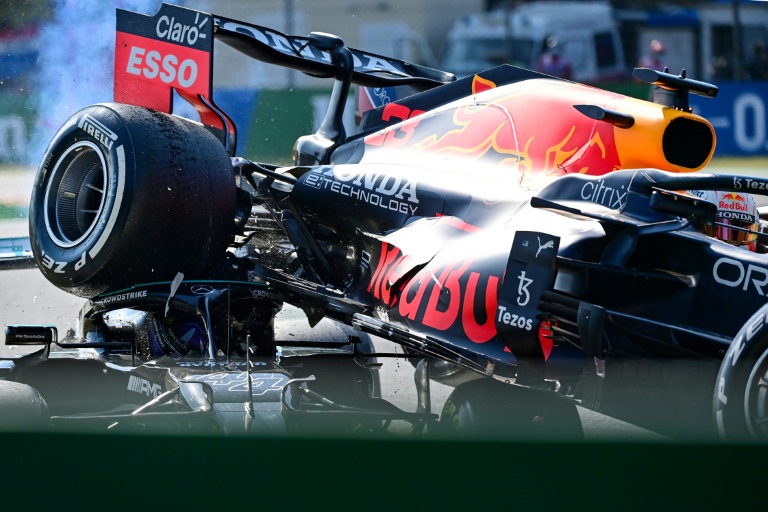 ROME - The sight of the hefty back tyre of Max Verstappen's Red Bull Formula One car crashing down towards the helmet of Lewis Hamilton at the Italian Grand Prix made for sickening viewing.

The seven-time world champion was beached in his Mercedes but ultimately saved by his halo, a cockpit head protection system introduced in March 2018.

"Honestly, I feel very fortunate," said Hamilton. "Thank God for the halo, that ultimately, I think, saved me, and saved my neck.

"I don't think I've ever been hit on the head by a car before and it's quite a shock for me, because I don't know if you've seen the image but my head really is quite far forward.

"And I've been racing a long, long time, so I'm so, so grateful that I'm still here."

Verstappen was blamed by the Monza stewards for the dramatic airborne crash with Hamilton.

The Red Bull driver, who leads Hamilton by five points in the Formula One standings but must now serve a three-place grid penalty at the Russian Grand Prix in a fortnight's time, had tried to muscle past Hamilton who had just rejoined the track after a pit stop on lap 26.

But Verstappen's car, pushed onto the sausage kerb at the Turn One chicane, ended up with its back wheel rolling over the top of his rival's Mercedes. The halo protected Hamilton's head.

Mercedes team principal Toto Wolff had once threatened to take a chainsaw to the safety system if he could, because of its weight.

But he struck a different tone after watching Hamilton escape unscathed.

"The championship was good fun up until now but we saw the halo save Lewis' life today. We don't want to see someone seriously hurt," Wolff said in Monza.

The halo, a thong-like titanium and carbon fibre structure above the cockpit weighing less than 10kg and capable of resisting two tonnes, was highly divisive when it was introduced.

Team principals, drivers and fans were split over whether it was the right safety solution when it made its debut ahead of the 2018 season opener at the Melbourne Grand Prix.

After years of research and development, motorsport's governing body, the FIA, settled on the halo to protect drivers from flying debris following the deaths of Jules Bianchi, who died nine months after crashing at the 2014 Japanese Grand Prix, and Justin Wilson, who was killed in an IndyCar race in the US the following year.

Motor racing purists were aghast because they say grand prix racing is supposed to be an open-cockpit formula. Other fans moan it is just plain ugly and some drivers have complained it restricts vision.

Hamilton, speaking in Melbourne after the halo's introduction in 2018, said: "We have known for some time it was coming and I think after a few races we will forget it is even there."

The halo is the latest in a long list of Formula One safety measures introduced in the wake of Ayrton Senna's death in 1994.

That year saw the cockpit lengthened and reinforced and the suspension strengthened. The next season, 1995, brought higher norms for crash tests.

In 1996, the protection round the driver's head was reinforced and two years later the wheels were attached to the car by tethers to stop them flying off.

A head and neck support system (HANS), which attached the helmet to the shoulders and is designed to protect the spine, was introduced in 2003.

It was followed in 2018 by the halo to protect a driver's head.

French driver Romain Grosjean had a spectacular crash at the Bahrain Formula One race last year, but survived thanks to what he said was the halo.

"I wasn't for the halo some years ago but I think it's the greatest thing we brought to Formula 1 and without it I wouldn't be able to speak to you today," Grosjean said at the time.

George Russell, who will join Hamilton at Mercedes next season, also credited the halo with saving him from serious injury after he was hit by a bouncing wheel in the Belgian Grand Prix last year.