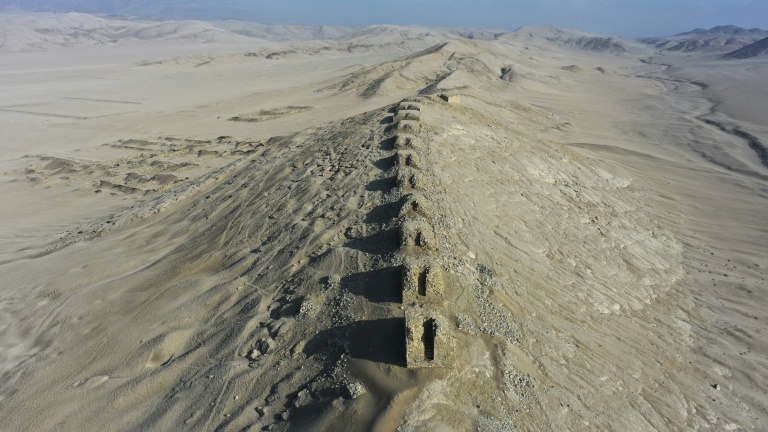 The solar observatory of Chankillo in Peru, July 22, 2021

CASMA - A 2,300-year-old solar observatory in Peru, a structure of 13 stone towers built atop a hill and used as a calendar, was declared a UNESCO World Heritage site on Tuesday.

The Chankillo observatory, built by an ancient civilization about two millennia before the ascent of another well-known Sun cult -- the Inca empire -- allowed for remarkably accurate astronomical observations, according to recent studies.

Then in 2007, a study in the journal Science proposed the sequence of towers erected between 200 and 300 BC "marked the summer and winter solstices" and that Chankillo "was in part a solar observatory."

Their purpose was to time with astonishing accuracy the months, solstices and equinoxes -- the planting and harvesting seasons and religious holidays.

The structure works like a giant clock, marking the passage of time over the span of a year.

It was also likely a place of Sun worship.

Sites to the east and west of the towers feature the remains of objects used for ritual sacrifices.

The observatory and its ceremonial appendages were protected by fortress walls made of stone, mud and tree trunks.

The complex spans some 5,000 hectares, but only about one percent has been studied, said Ghezzi.

Last year, the coronavirus epidemic paralyzed archaeological excavations in Peru, as elsewhere, and abandoned many sites containing priceless pre-Columbian objects to the mercy of looters, who sell to the black market.

Chankillo was among the sites invaded; not by thieves but by nearby farmers who have long looked to expand their land and who capitalized on the lack of control to plant crops within the borders of the site.

Peru has 12 other sites on the UNESCO World Heritage list, including the Inca citadel of Machu Picchu.

Chankillo was added to the list at the 44th session of the World Heritage Committee,  held online and chaired from Fuzhou in China.