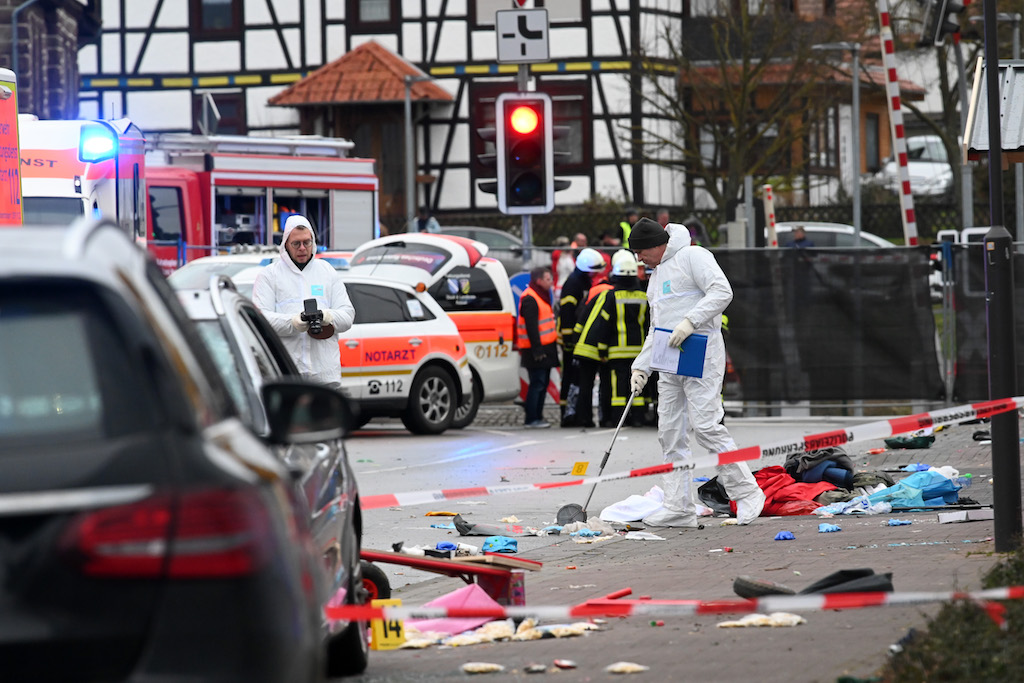 Forensic police officers are seen close to the site where a car drove into a carnival procession in Volkmarsen.

VOLKSMARSEN - Some 30 people -- including children -- were injured when a car ploughed into a carnival procession in the small German town of Volkmarsen, with police arresting the driver but declining to speculate on a motive.

Prosecutors in Frankfurt said the 29-year-old suspect was a German national who faces charges of attempted homicide over the incident in the western state of Hesse.

The investigation was continuing "in all directions", they said in a statement, after police stopped short of calling the incident an attack.

Eyewitness reports at the carnival parade described the driver ploughing through a barrier in a silver car and driving straight through the crowd at high speed.

"It appears to have been an intentional act," a local police spokesman told reporters, but said the incident was not being classified as an attack until investigators had more information.

Around 30 people were injured, some of them seriously, the Frankfurt prosecutors said. Children were among those hurt.

The driver was injured as well and receiving medical care, prosecutors added.

Citing sources close to the investigation, Spiegel weekly said the driver had apparently "consumed a high level of alcohol".

Hesse state premier Volker Bouffier said he was "shocked at the terrible act" and urged the public not to jump to conclusions.

"The circumstances surrounding this act remain unclear and I urge you not to speculate about possible motives."

As in many parts of the country, residents in Volkmarsen were celebrating Rose Monday, a highlight of annual carnival festivities that sees adults and children dress up and attend parades where people play music and throw candies from floats.

Images from the scene showed police officers and rescue vehicles next to a silver Mercedes hatchback, having apparently come to a halt outside a Rewe supermarket.

A pile of debris can be seen on the road next to the car, including a broken wooden cart, a knocked-over traffic cone and bottles of sparkling wine.