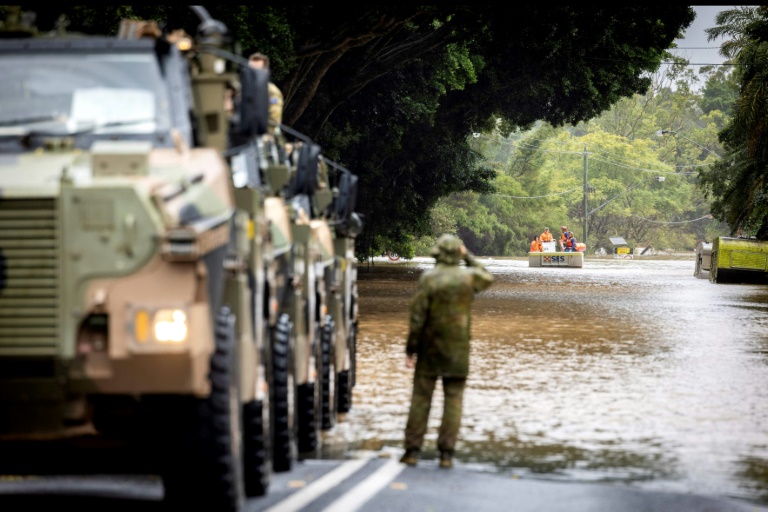 SYDNEY - The Australian coastal enclave of Byron Bay, known for its celebrity residents and idyllic beaches, was inundated by floodwaters Wednesday as severe storms again battered the country's east.

Torrential rain that began Monday proved unrelenting, with nearly 300 millimetres (11.8 inches) falling in the area in 24 hours, forcing many shops in the Byron Bay town centre to close as roads were cut off by rising water levels.

Byron's normally buzzing high street -- lined with popular restaurants, bars and clothing stores -- was all but empty, transformed into a river by the metre-high, mud-brown floodwaters.

In the nearby town of Alstonville, 420 millimetres of rain fell in 24 hours.

By Wednesday afternoon, there were 16 evacuation orders in place across the affected region, urging thousands of people to leave their homes for higher ground.

For weeks Australia's east has been smashed by extreme weather, fuelled by La Nina weather patterns and climate change.

Record rainfalls and deadly flooding have killed at least 22 people since early February.

In Lismore, which last month was devastated by record 14.3-metre (47-foot) floods, the town's levee was breached Wednesday morning, sweeping away any progress made by a weeks-long clean-up effort.

The town's local member of parliament Justine Elliot warned residents on social media that the levee's siren would not sound because of a malfunction.

"You MUST get out now," she wrote on Twitter.

Lismore business owner and community organiser Sally Flannery told AFP that water levels in the town had reached the second storey of some homes and businesses, as they did last month during record floods.

Flannery said the renewed flooding was "compounding trauma" in the town as many people who lost their homes just weeks ago have now had to evacuate from their emergency accommodation.

"It's becoming almost impossible to live here," she said, fearing "a mental health crisis" in the wake of these rolling disasters.

"I'm a staunch Lismore advocate and I don't know that I'll be going back to live in the flood zone."

But with rental prices on high ground skyrocketing, "there's not a lot of other options", she said.

During a visit to Lismore in the aftermath of last month's floods, Australia's prime minister Scott Morrison said the country was "getting hard to live in because of these disasters".