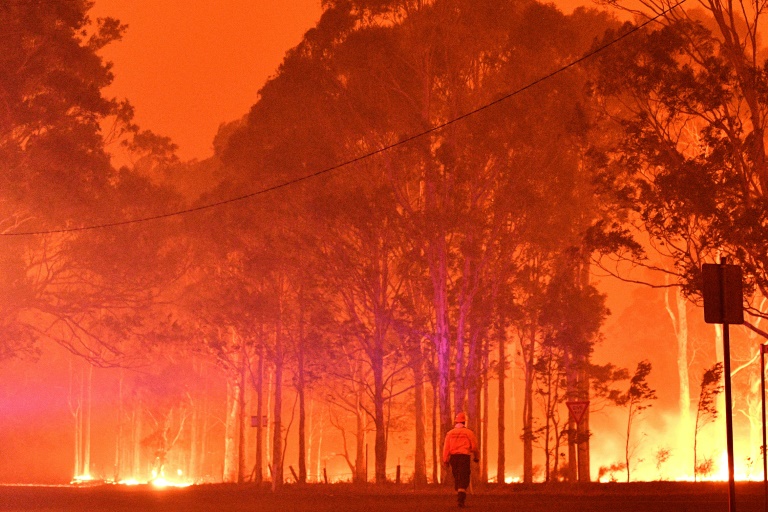 The Australian wildfires were some of the worst on record. AFP/Saeed Khan

SYDNEY - Devastating Australian wildfires released twice as much climate-warming C02 than previously thought -- but also triggered vast algae blooms thousands of miles away that may have soaked up significant extra carbon.

Severe summer heat and drought helped spark the fires from late 2019 to early 2020 that killed 33 people and tens of millions of wild animals, while destroying vast swathes of eucalyptus forest.

These "Black Summer" fires, which enveloped Sydney and other cities in smoke and ash for months, were known to have released huge amounts of carbon dioxide into the atmosphere, but the exact amount was difficult to quantify.

To find out, researchers in the Netherlands used new satellite technology that can monitor the gases released during a fire on a daily basis.

They produced estimates of overall emissions as well as carbon dioxide released, concluding that the amount was more than twice previously estimated from five different fire inventories. 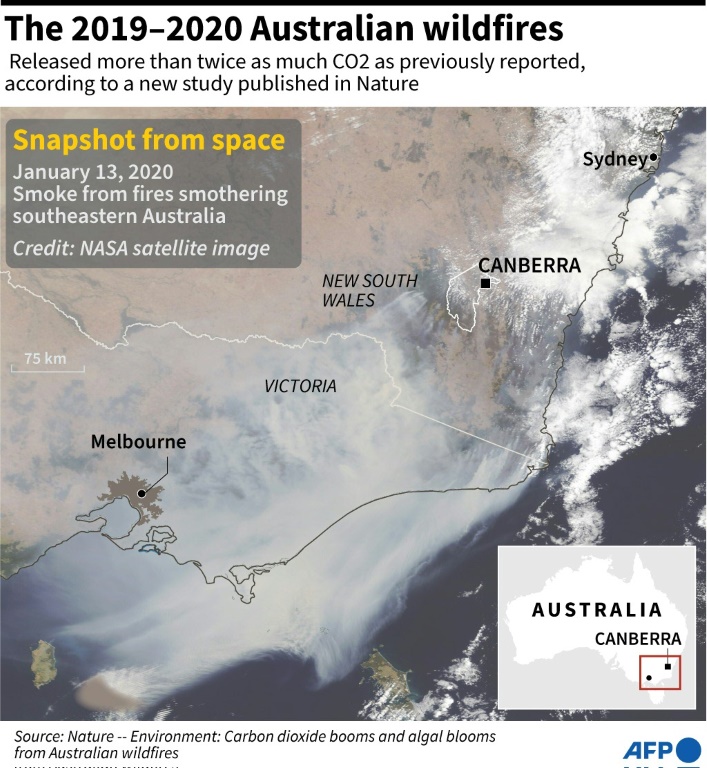 "We found that the CO2 emissions from this single event were significantly higher than what all Australians normally emit with the combustion of fossil fuels in an entire year," said Ivar van der Velde of the SRON Netherlands Institute for Space Research, lead author of the paper published in the journal Nature.

While it was still uncertain, he said "given current trends in global warming, we believe it is quite possible that we will see more of these types of large wildfires in Australia, and possibly elsewhere.

"This will likely contribute to even more CO2 in the atmosphere than expected."

Wildfires are consistent with a warmer world, as climate change makes droughts and heatwaves more frequent and intense.

Depending on the amount of C02 that is drawn back into plants as they regrow, the emissions could help drive further warming.

In a separate study in Nature, researchers found that high levels of iron pumped into the air by the fires were blown huge distances, eventually causing a significant increase in phytoplankton in the Pacific Ocean thousands of kilometres from Australia.

But he said the "most surprising thing was the magnitude" revealed in the research, with blooms covering an area larger than Australia itself.

Phytoplankton perform a crucial role in the global climate, taking in C02 as they photosynthesise in a process similar to plants.

Part of that carbon eventually sinks into the deep ocean and is stored.

"Our results provide evidence that iron from wildfires can fertilise the ocean, potentially leading to a significant increase in carbon uptake by phytoplankton," said co-author Nicolas Cassar, of the Nicholas School of the Environment at Duke University.

But he said finding out whether the amount to which the fire emissions could be offset by C02 absorbed by micro algae blooms seeded by the fires is the "Holy Grail" of the research and still uncertain.