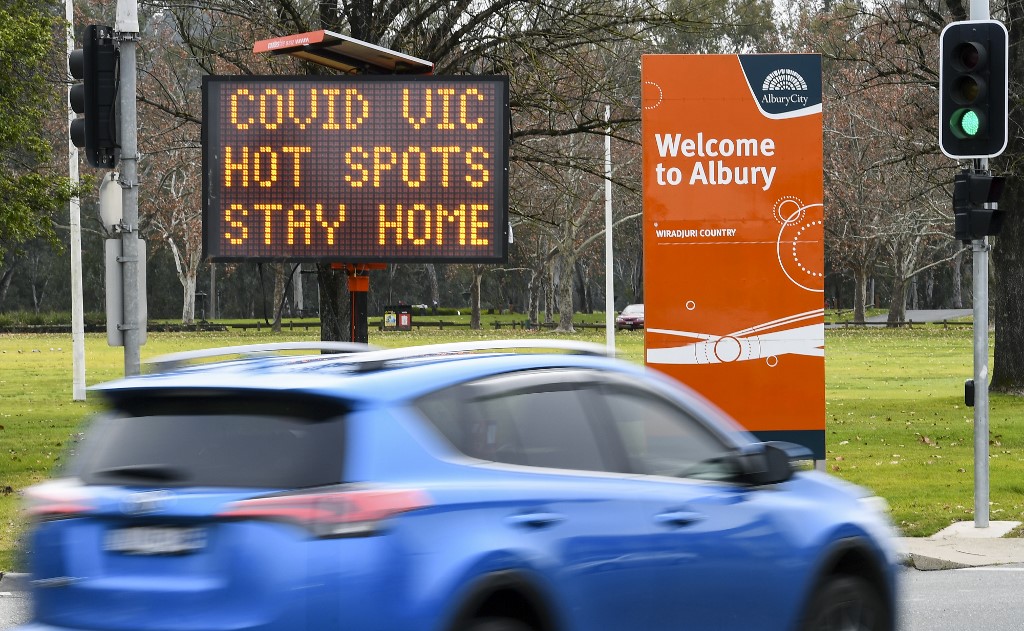 A car drives past a sign in the southern New South Wales (NSW) border city of Albury warning of fines for people entering NSW from COVID-19 coronavirus hotspots in Victoria as the border is soon to be closed, on July 7, 2020.

MELBOURNE - Five million Melbourne residents were ordered back into lockdown after coronavirus cases surged in Australia's second-biggest city on Tuesday.

READ: Australia may keep coronavirus restrictions for a year

It is the first such spike in Australia since the virus was believed to have been suppressed countrywide in April, and is a brutal reminder that risks remain even as life returns to normal.

After the south-eastern city detected 191 new cases in 24 hours, Andrews said there were now too many to trace properly, so restrictions were needed.

"These are unsustainably high numbers," he said.

"No-one wanted to be in this position. I know there will be enormous amounts of damage that will be done because of this. It will be very challenging."

Residents will be restricted to their homes except for work, exercise, medical care or to buy essentials.

Most students will return to remote learning while restaurants and cafes will be limited to serving takeaway food.

Experts have warned that people everywhere will have to get used to the "new normal" of on-and-off restrictions as new clusters emerge and subside.

But there is growing concern that most of Melbourne's new cases are not directly linked to residents returning from overseas.

"The situation we are in is more serious than late March, because we have community transmission, which is much harder to track than infection in return travellers," said Raina MacIntyre, a biosecurity expert at the University of New South Wales.

"People all over Australia must accept the gravity of the situation and play their part."

Although the lockdown covers the Melbourne metropolitan area, the entire state of Victoria will effectively be sealed off from the rest of the country from overnight Tuesday, as state borders are closed.

An AFP reporter in the border town of Albury said that hours before the closures were expected to start, residents were still trying to secure permits allowing them to cross for work or essential business.

Police and the military say they will patrol dozens of border crossings and use drones and other aircraft to check the vast frontier with other states, where the coronavirus has been contained.

Health officials last week effectively shut off about 300,000 Melbourne residents from the rest of the city until the end of July, but that has now been extended beyond those neighbourhoods.

Around 3,000 people in the city were also locked down in their homes on Saturday in Australia's strictest coronavirus response to date after a cluster emerged in a high-rise public housing estate.

So far, 69 cases have been recorded across the nine densely populated towers and there are concerns the virus could spread widely, with one health official likening the crowded conditions inside to "vertical cruise ships".

Cruise ships emerged as early coronavirus hotspots, with passengers and crew often packed in small cabins and at high risk of infection.

Australia has recorded almost 9,000 cases of COVID-19 and 106 deaths from the virus.

Almost all new cases are being detected in Melbourne, while other regions are enjoying relaxed restrictions after largely curbing the virus's spread.

Health officials have begged the public to get tested, saying online disinformation had spurred more than 10,000 people to refuse testing.