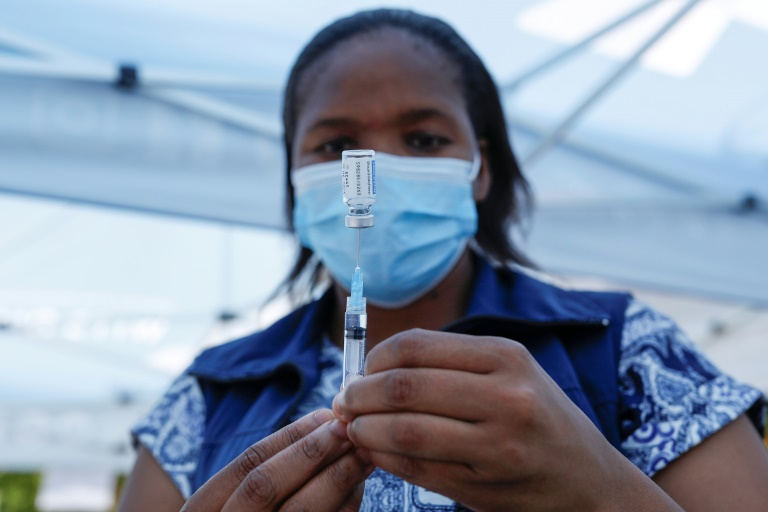 South Africa has seen the most cases in Africa over the past week. AFP/Phill Magakoe

Already fragile hospital systems are at risk of being overloaded, prompting governments to urge citizens to get vaccinated, and in some cases reimpose strict measures.

Here is a rundown of Covid in the region, currently the hardest hit in Africa.

The new strain was first detected in the region last month, and has since been reported in dozens of countries around the world.

Early research suggests it is highly contagious, but that vaccines offer at least some protection and that so far it does not appear to be causing more serious illness or deaths compared to previous strains. 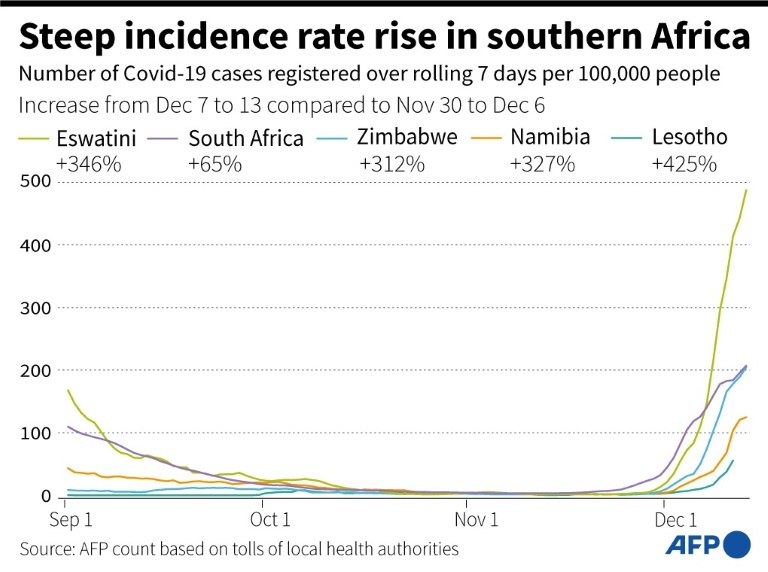 But it is still wreaking havoc in South Africa, which reported the largest number of new cases in Africa in the past week, with 122,870 new infections over the past seven days to Wednesday, according to an AFP tally based on official figures.

The number of Covid tests has also risen in recent weeks, and the positivity rate has hit a record high of 28.9 percent.

The country is seeing around 17,000 new cases a day, a high not seen since mid-July when around 20,000 cases were reported daily.

The latest wave has not seen deaths mount significantly, and most people testing positive have only displayed minor symptoms so far.

The government is urging the population to get vaccinated, especially young people among whom infections are soaring.

Last week it said Pfizer booster shots would be available from January to everyone over the age of 12.

Around 30 percent of all South Africans are fully vaccinated, a higher rate than elsewhere on the continent but far behind most Western countries.

New cases in the tiny landlocked kingdom have risen 425 percent over the past week, the fastest out of any country in the world excluding micro-states or countries that have reported fewer than 50 cases per 100,000 people.

It has seen a jump from a few cases per day in early November to a daily average of more than 1,300 over the past week.

The government has reimposed several restrictions with Omicron on the rise, including a night-time curfew, quarantine for people arriving in the country and proof of vaccination to enter bars.

But the measures have not kept new cases at bay. 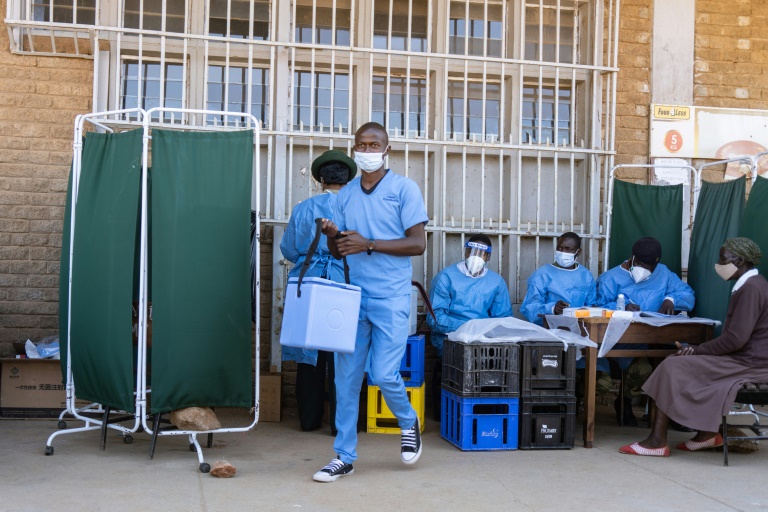 Infections are rising at the second-highest rate globally, with a record 4,300 average new daily cases over the past week.

As elsewhere, steep rises in deaths and serious illness have not been reported, and authorities are hoping that does not change in a country where health systems are already fragile.

Queues for Covid tests in Eswatini are long, as cases mount in Africa's last absolute monarchy.

The tiny nation now has the unfortunate status of having the highest incidence rate in southern Africa: 488 cases per 100,000 people in the past seven days.

It has also broken its record for weekly Covid cases, with 5,658 new infections reported from December 7 to 13.

Only about a quarter of the population of 1.2 million are vaccinated in the impoverished nation where vaccine hesitancy is high and many rely on traditional medicine.

A month ago, Namibia was reporting a few dozen Covid cases per week. Today, per capita cases are rising at the third-highest rate in the world.

The rate of new infections rose by 327 percent over the past seven days, with 3,169 new cases reported.

With just 12.1 percent of people vaccinated in the country of 2.4 million, authorities are desperately trying to convince people to get jabs.

The country recently destroyed tens of thousands of vaccines that expired before they could be used.

- by Claire Doyen, with Valentin Rakovsky in Paris