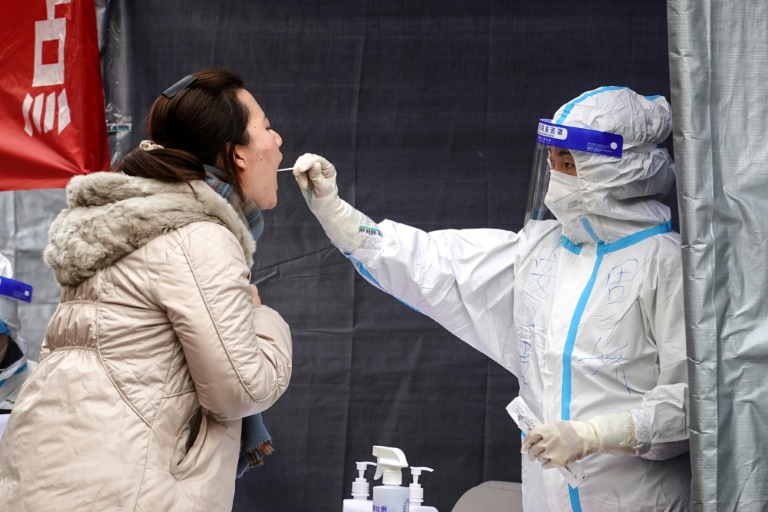 Millions of residents of Xi'an, in China's northern Shaanxi province, were confined to their homes for weeks during a coronavirus outbreak

The Chinese capital has already suspended thousands of flights and increased testing after the first community case of the Omicron variant was recorded on Saturday.

City health authorities said Wednesday five new infections had been reported in the past 18 hours, bringing the total to eight.

"The current epidemic prevention and control situation is severe and complicated," Xu Hejian, spokesman for the Beijing municipal government, said at a briefing.

"The Omicron strain... is intertwined... with the Delta virus, which brings greater risks."

READ | SA's vision for vaccine manufacturing is coming together - Ramaphosa

Four of the new cases were workers at a refrigerated warehouse, he said.

Chinese officials have pursued a strict "zero-Covid" approach with tight border restrictions and targeted lockdowns -- a strategy that has come under pressure as multiple clusters have flared across the country ahead of next month's Winter Olympics.

International delegates, media and some athletes have already begun arriving for the Games, which will be held in a strict bubble that separates anyone involved from the wider population.

With several local cases reported in Beijing, schools have started their Lunar New Year holidays earlier than expected, according to reports.

Meanwhile, the northern city of Xi'an has partially resumed public transport, according to official announcements, after millions were confined to their homes for weeks because of an outbreak.

The easing of transport rules -- including the resumption of some inter-city train routes -- comes just before the Lunar New Year holiday later this month, traditionally a period of mass travel.

About 13 million Xi'an residents were placed in lockdown in mid-December as cases spiked, but the historic city reported no new local cases on Wednesday for the first time in weeks.

Trains from Xi'an to popular destinations such as Beijing, Shanghai and Guangzhou have "basically resumed operations" as well, state broadcaster CCTV said Wednesday.

CCTV added that the number of commuters at the city's train stations -- mainly students and migrant workers -- was increasing.

Local authorities came under fire for how they handled it amid food supply issues and medical tragedies -- a pregnant woman miscarried after being denied access to a hospital because she lacked a recent coronavirus test.

Wednesday's absence of cases in Xi'an suggests the outbreak there is being brought under control.

But other outbreaks involving both the Delta and Omicron variants have since appeared in the eastern port city of Tianjin and the southern manufacturing region of Guangdong.