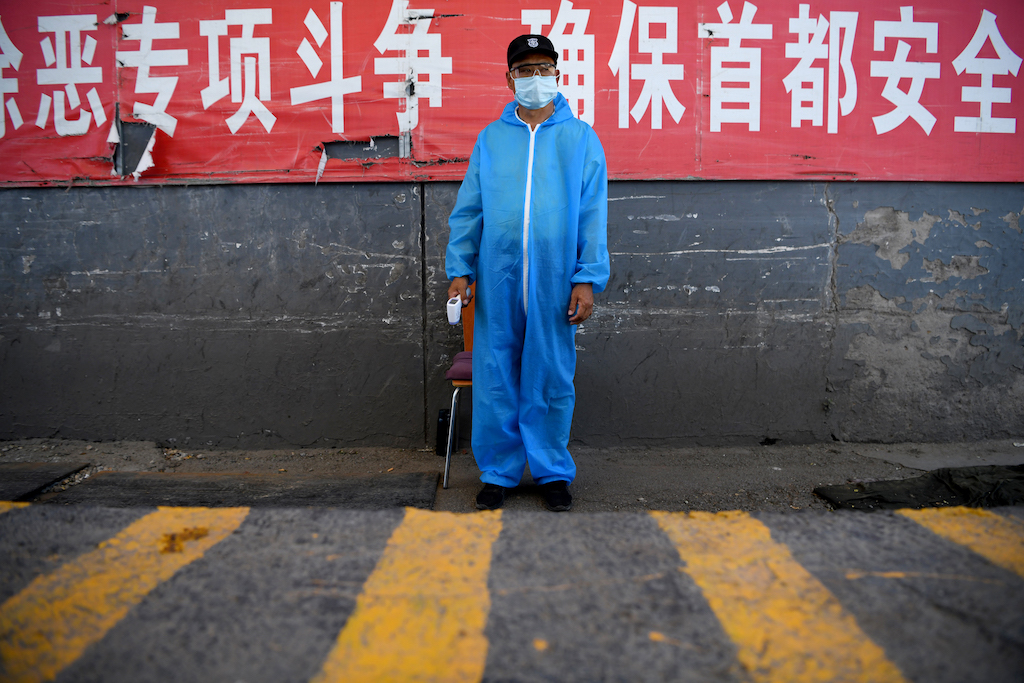 A security guard wearing a protective mask and suit stands at a checkpoint at the Xinfadi market in Beijing on June 14, 2020.

BEIJING, CHINA - Beijing on Tuesday reported zero new coronavirus cases for the first time since the emergence of a cluster in the Chinese capital in June that prompted fears of a domestic second wave.

A total of 335 people have been infected since a cluster emerged at the city's massive Xinfadi wholesale market in early June.

READ: Parts of Beijing locked down due to fresh virus cluster

The news comes as millions of students in the city and around the country gather in exam halls to take the all-important national college entrance exam after days of tracking their health.

Beijing's health commission said on Tuesday it detected only one asymptomatic case the previous day, which China does not include in its count of confirmed infections.

While Chinese authorities are still investigating the cause of the latest outbreak, the virus was detected on chopping boards used to handle imported salmon at Xinfadi market, prompting a ban on certain imports and increased scrutiny of foreign food suppliers.

The Beijing government has tested more than 11 million people for COVID-19 since June 11 - roughly half the city's population, officials said at a press conference Tuesday.

Residents lined up in the summer heat at testing venues across the city in June, with hundreds of thousands of samples collected each day.

Localised lockdowns across the city have been eased in recent days, with people living in areas of the city considered "low risk" now allowed to travel freely again.

The first batch of more than 5,000 people quarantined for their connections to Xinfadi market will be released Tuesday, Beijing spokesman Xu Hejian said.

But city authorities warned against complacency.

Authorities "cannot rule out the possibility of new domestically transmitted cases over the next week", she warned, as thousands of people including 31 asymptomatic patients remain under quarantine.

China had largely brought the deadly outbreak under control before the new Beijing cluster was detected last month.

The government has since also imposed a strict lockdown on nearly half a million people in neighbouring Hebei province to contain a fresh cluster there, adopting the same strict measures imposed earlier this year in Wuhan, where the virus was first detected.