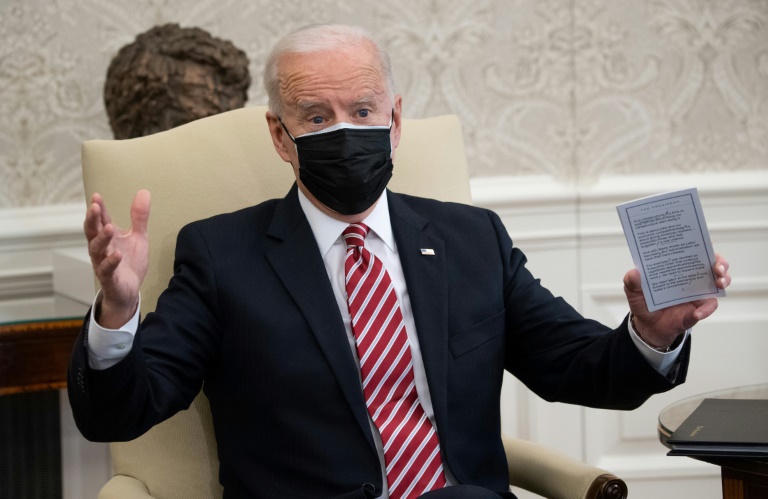 US President Joe Biden's participation will underline a decisive shift after cooperation was all but broken under his go-it-alone predecessor Donald Trump. AFP/Saul Loeb

WASHINGTON - Joe Biden will make his presidential debut on the world stage on Friday as America's G7 partners re-focus their collective heft on pandemic recovery and climate change after the psychodramas of the Trump era.

UK Prime Minister Boris Johnson, this year's G7 chairman who hopes to host the grouping's leaders in Britain in June, will use the virtual talks to urge the development of new vaccines in just 100 days.

That would represent a dramatic decrease on the 300-odd days that were needed to come up with jabs against the coronavirus -- in itself a breakneck achievement.

Biden will become the first US president to address the Munich meeting, underlining a decisive shift after cooperation was all but broken under his go-it-alone predecessor Donald Trump.

Since taking office last month, the Democrat has re-committed the United States to climate action and the World Health Organization (WHO).

But he has maintained one Trumpian perspective -- mistrust of China.

Beijing is not part of the G7 -- which includes Britain, Canada, France, Germany, Italy, Japan and the US -- and Washington is repositioning rich democracies as a counterweight to China amid mistrust of its initial handling of COVID-19.

Meanwhile, Britain wants the G7 to back a proposed pandemic treaty to enhance early warning and data transparency in case of future outbreaks.

London denies it has China in its sights, but the Asian power has been widely accused of covering up the emergence of the virus in late 2019 and depriving the WHO of vital early information.

Johnson will also use the G7 to push for the WHO and international scientists to work on the 100-day rollouts plan for new vaccines and treatments.

"The development of viable coronavirus vaccines offers the tantalising prospect of a return to normality, but we must not rest on our laurels. As leaders of the G7 we must say today 'never again'," the prime minister said ahead of the summit.

"By harnessing our collective ingenuity, we can ensure we have the vaccines, treatments and tests to be battle-ready for future health threats, as we beat Covid-19 and build back better together."

Both Johnson and French President Emmanuel Macron intend also to drum up G7 support to facilitate the rollout of vaccines to poorer countries, especially in Africa, for instance by donating more money to the UN's Covax programme.

"We must respond to this glaring inequality," Macron said at a meeting with African leaders on Wednesday.

On Thursday, White House officials said Biden would pledge $4-billion in US aid to Covax during his virtual meeting with other G7 leaders on Friday.

Now that inoculation campaigns are picking up speed, in the West at least, G7 leaders also hope to look past the pandemic to financial recovery after lockdowns ravaged many economies.

Biden, who shares Johnson's sloganeering aim to "build back better", will underline to G7 allies his intention to carve out a more inclusive economy that benefits "all workers", including women and minorities.

"President Biden will also discuss (the) need to make investments to strengthen our collective competitiveness and the importance of updating global rules to tackle economic challenges such as those posed by China," the White House said.

Updated rules are also under debate among G7 finance ministers to harmonise taxation of cross-border digital giants such as Google and Facebook, which have enjoyed an excellent pandemic in terms of profits.

And the leaders will endorse recent declarations by their foreign ministers condemning the February 1 coup in Myanmar, which has provoked sanctions from the US, Britain and Canada.

Biden will in addition promote "a robust agenda of measures to address the global climate crisis", as Britain prepares to host the UN's next climate summit, COP26, in the Scottish city of Glasgow in November.

Prior to that, Johnson hopes to convene the first in-person G7 summit in nearly two years on June 11-13, at a picturesque resort in Cornwall, southwest England.

It will build towards a G20 gathering including Brazil, China, India and Russia in late October in Rome, just ahead of COP26, which is billed as the last chance for world leaders to avert runaway global warming.