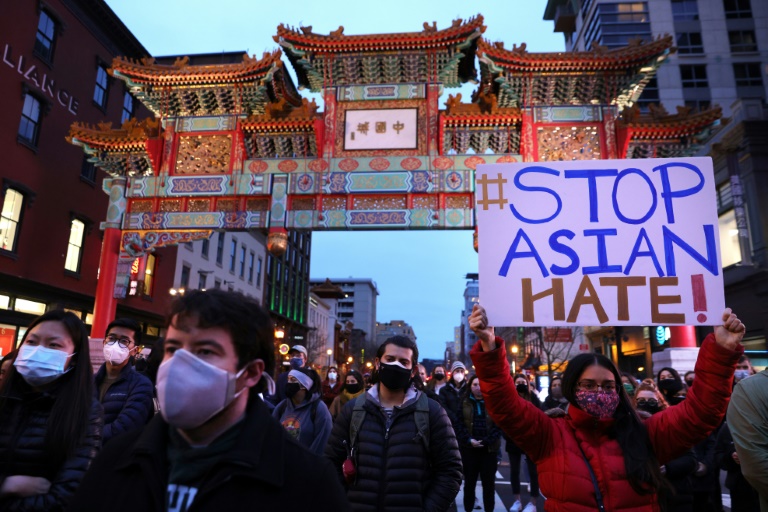 WASHINGTON - US President Joe Biden headed to Atlanta Friday to comfort an Asian-American community plunged into grief and fear after a killing spree left six women of Asian descent dead and a nation alarmed by pandemic-era hate crimes.

The pre-scheduled trip to the southern metropolis was originally intended to focus on Biden's Covid-19 battle plan, with a visit to the Centers for Disease Control and Prevention and promotion of the economic rescue package recently passed by Congress.

But the carnage around Georgia's largest city prompted the president to add a meeting with Asian-Americans.

Biden, accompanied by Vice President Kamala Harris, will "hear about the impact of the incident on the community, and to get their perspective on the rise in anti-Asian hate incidents," White House press secretary Jen Psaki said.

Biden will deliver a speech at Emory University, and will use the visit to reaffirm his "commitment to combating xenophobia, intolerance and hate," Psaki said. 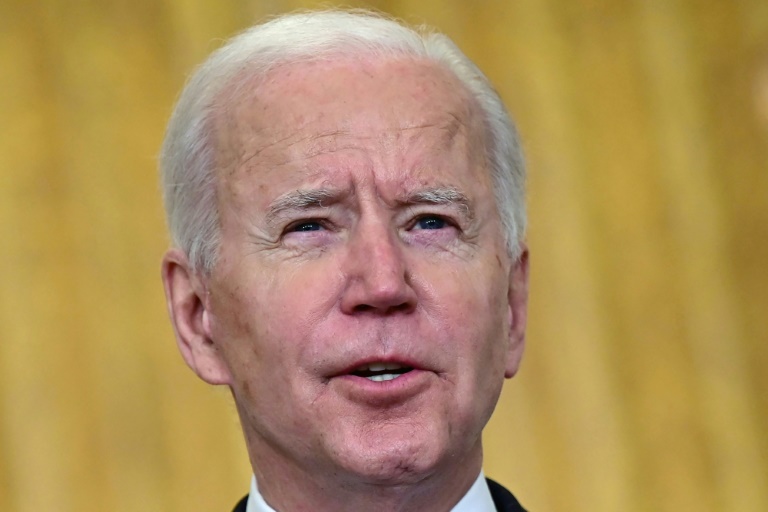 US President Joe Biden, who headed to Atlanta, Georgia to console the Asian-American community over a series of murders, has demanded an end to anti-Asian attacks

Three massage parlors around Atlanta were targeted Tuesday, before a 21-year-old man suspected of the killings was arrested hours later.

He has admitted carrying out the attacks, according to law enforcement, but claims he was not motivated by racial hatred.

Officers said Long told police he was grappling with a sexual addiction and that he wanted to "eliminate" a temptation that put him in conflict with his strict religious beliefs.

Authorities have not confirmed the motive, but the killings were seen as laying bare the intersection of sexism and racism in the United States.

"Asian-American women have been stereotyped in ways that are racialized, gendered and sexualized," Catherine Ceniza Choy, a professor of ethnic studies at UC Berkeley, told AFP.

She noted that when police stressed that the suspect denied a racial motive but claimed it was sexual addiction, "what those statements reflect is the sexual objectification of Asian and Asian-American women... And it hurt."

Authorities have gradually begun releasing details of the victims.

The four women killed in Atlanta itself -- at two neighboring spas -- were named Friday as Hyun J. Grant, 51, Soon C. Park, 74, Yong A. Yue, 63 and Suncha Kim, 69 according to the Fulton County medical examiner's office.

Grant, who worked at the Gold Spa, left behind two sons -- the eldest of whom, Randy Park, 23, set up a fundraising page which by Friday had attracted almost $750,000 in donations.

"She was a single mother who dedicated her whole life to providing for my brother and I," Park wrote. "Losing her has put a new lens on my eyes on the amount of hate that exists in our world."

The other four victims -- targeted at Young's Asian Massage in the Atlanta suburb of Acworth -- included Xiaojie Tan, the spa's 49-year-old owner described as "the sweetest, kindest, most giving person" by a longtime customer, Greg Hynson, speaking to The New York Times.

The attack also claimed the lives of Delaina Yaun, 33 -- a mother of two who was at the spa for a couple's massage with her husband -- as well as two employees: 44-year-old Daoyou Feng and Paul Andre Michels, 54. 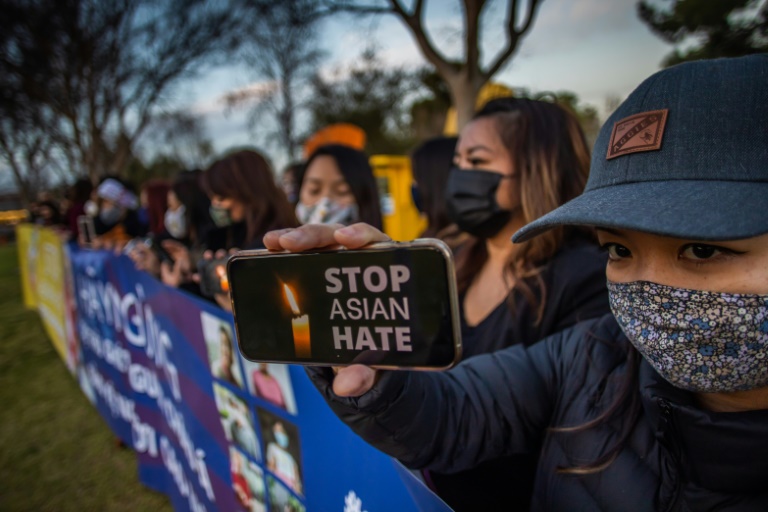 Julie Tran holds her phone during a candlelight vigil in Garden Grove, California

"It's heartbreaking," said Andrew Yang, a Democratic former presidential hopeful who is running for mayor of New York.

Yang recalled growing up "with this constant sense of invisibility, mockery, disdain," and lacking a true sense of belonging because he looked Asian.

"But this has metastasized into something new and deadly and virulent and hateful," he told a press conference Thursday.

Biden ordered flags to be flown at half-staff at the White House and other public buildings until Monday as a mark of respect for the Atlanta victims.

In Washington, an extraordinary House hearing Thursday heard testimony from four Asian-American congresswomen, one of whom said the community has been "screaming out for help." 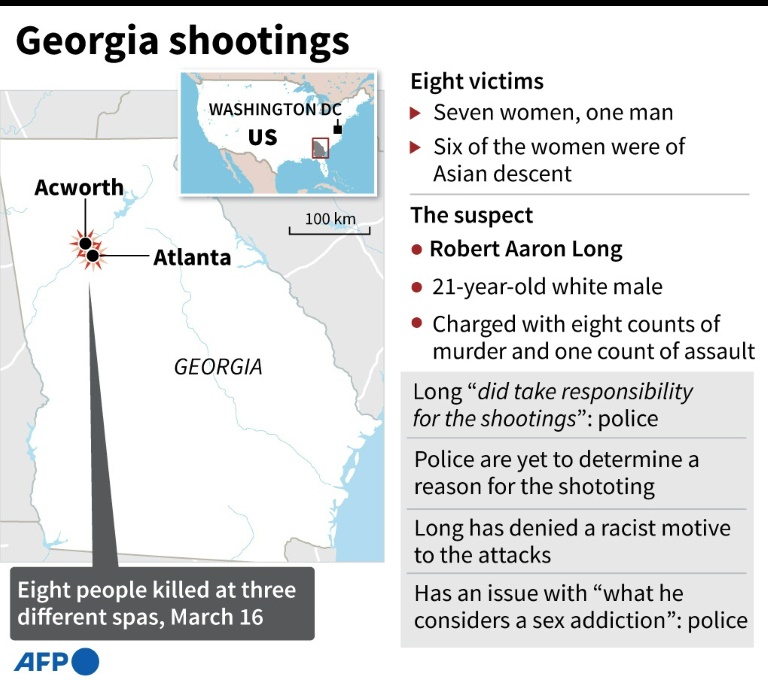 Map of the US state of Georgia locating Atlanta and Acworth, where at least 8 people were killed in shootings at three different spas on Tuesday

Another, Democrat Grace Meng, warned that Republican rhetoric on the pandemic, including language that paints Asians as responsible for the virus, has put "a bull's eye on the back of Asian-Americans."

Vigils have been held in several US cities to mourn the victims and condemn racially motivated violence. 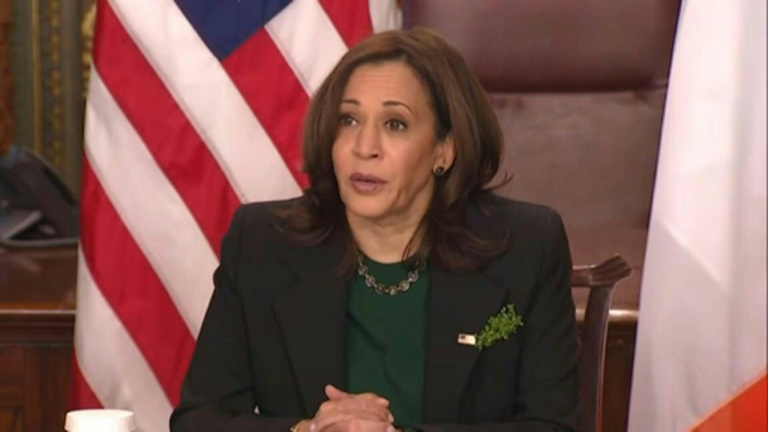 'We stand with you': Harris to Asian Americans after Atlanta attacks

Meanwhile the Cherokee County clerk's office confirmed that Long's first court appearance, set for Thursday, was cancelled and that a new court date had yet to be set.