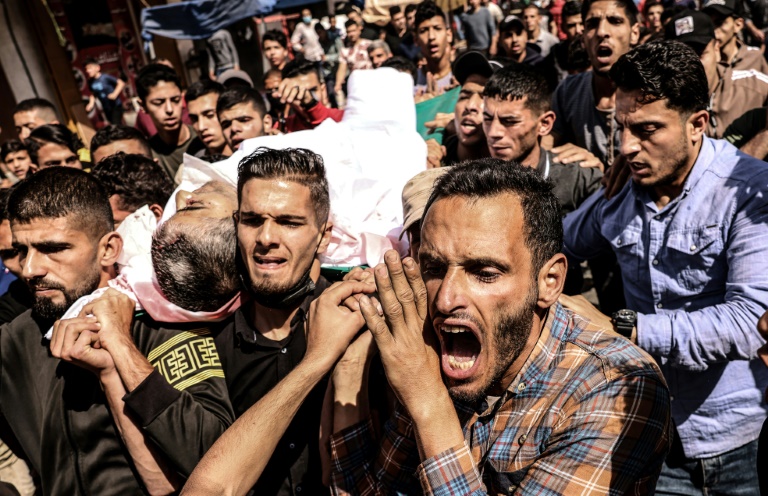 Mourners carry the body of Majd Abu Saadahthe, a Palestinian killed in an Israeli airstike, during his funeral in the town of Khan Yunis in the southern Gaza Strip

WASHINGTON - US President Joe Biden said Wednesday that Israel has a right to defend itself but after speaking with Prime Minister Benjamin Netanyahu he hopes violent clashes with Palestinians will end quickly.

"I had a conversation with Bibi Netanyahu not too long ago," Biden told reporters. "My expectation and hope is that this will be closing down sooner than later, but Israel has a right to defend itself when you have thousands of rockets flying into your territory."

Biden said US diplomacy was in high gear with national security and defence staff "in constant contact with their counterparts in the Middle East -- not just with the Israelis, but also with everyone from the Egyptians and the Saudis to the Emiratis."

Biden spoke as calls grew internationally for a de-escalation of violence after intense hostilities between Israel and the Palestinians that have left dozens dead and hundreds injured. 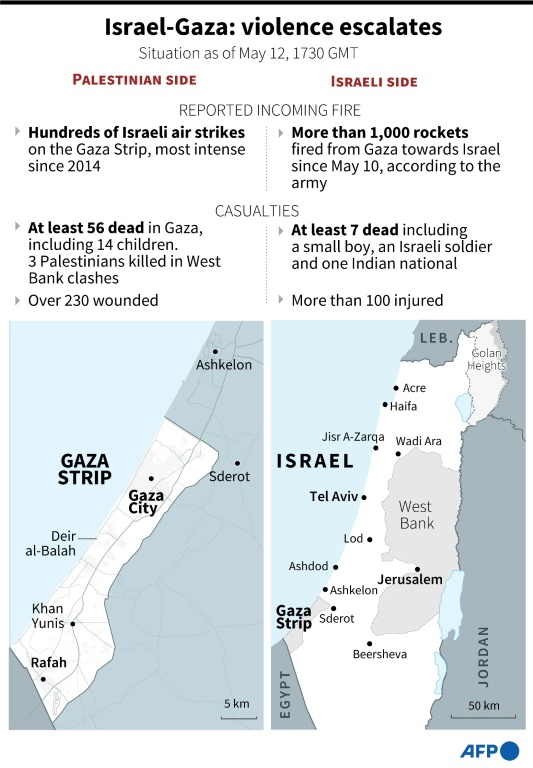 The Israeli army has launched hundreds of air strikes on the Gaza Strip since Monday, while Palestinian militants have launched more than 1,200 rockets, according to Israel's army, in some of the worst violence in seven years.

Coinciding with the aerial bombardments is surging violence between Arabs and Jews inside Israel.

Secretary of State Antony Blinken said he had spoken by telephone with Palestinian president Mahmud Abbas, to urge an end to the rocket attacks.

The rockets are being fired by Hamas, but the United States does not speak with the group, considering it a terrorist organization.

The conversation between the top US diplomat and Abbas was the first high-level call between the United States and the Palestinians since Biden was sworn into office in January.

Abbas's Palestinian Authority broke off contact with the previous US administration of Donald Trump in 2017, when he recognized Jerusalem as Israel's capital.

"I spoke with President Abbas about the ongoing situation in Jerusalem, the West Bank and Gaza," Blinken posted on Twitter. "I expressed condolences for the loss of life. I emphasized the need to end rocket attacks and deescalate tensions."

A readout of the call from the Palestinian presidency said Abbas had "stressed the importance of stopping the Israeli attacks on our Palestinian people everywhere, and putting an end to settler attacks and the aggressive Israeli measures against our people."

Earlier, Blinken announced that Hady Amr, the State Department official in charge of Israeli and Palestinian affairs, was leaving Wednesday to the region to urge "de-escalation of violence."

The diplomat also talked with Netanyahu, again pushing for both sides to step back from fighting.

Blinken "reiterated his call on all parties to de-escalate tensions and bring a halt to the violence," said a State Department statement. 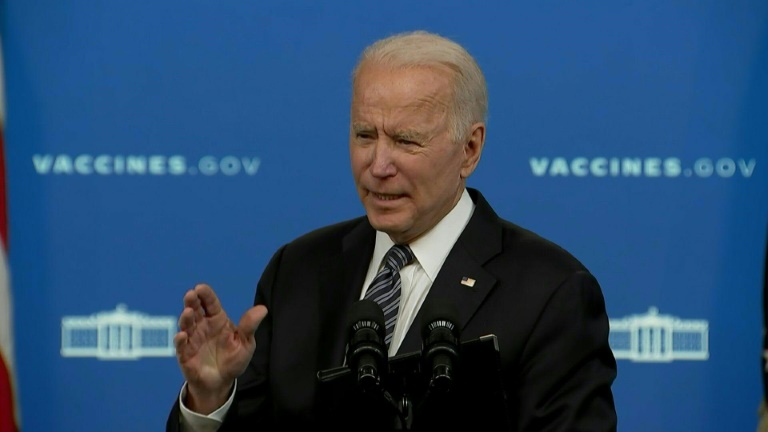 Blinken described scenes of dead Palestinian civilians, including children, as "harrowing" but defended Israel's assault on Gaza in response to rocket fire by Hamas militants.

"I think Israel has an extra burden in trying to do everything they possibly can to avoid civilian casualties, even as it is rightfully responding in defense of its people," Blinken said.

But the diplomat said there was a "very clear and absolute distinction between a terrorist organization, Hamas, that is indiscriminately raining down rockets -- in fact, targeting civilians -- and Israel's response defending itself."

Biden's administration earlier appealed to ally Israel to reroute a flashpoint parade in Jerusalem and prevent evictions of Palestinians in the holy city, the immediate trigger for the new round of violence.

Taking more nuance after the militantly pro-Israel administration of Trump, Blinken renewed US support for the eventual creation of an independent Palestinian state.

"This violence takes us further away from that goal," Blinken said.

"We believe Palestinians and Israelis equally deserve to live with safety and security and will continue to engage with Israelis, Palestinians and other regional partners to urge de-escalation and to bring calm."

In a statement, the White House said that during his call with Netanyahu, Biden "condemned the rocket attacks by Hamas and other terrorist groups, including against Jerusalem and Tel Aviv. He conveyed his unwavering support for Israel's security and for Israel's legitimate right to defend itself and its people, while protecting civilians."