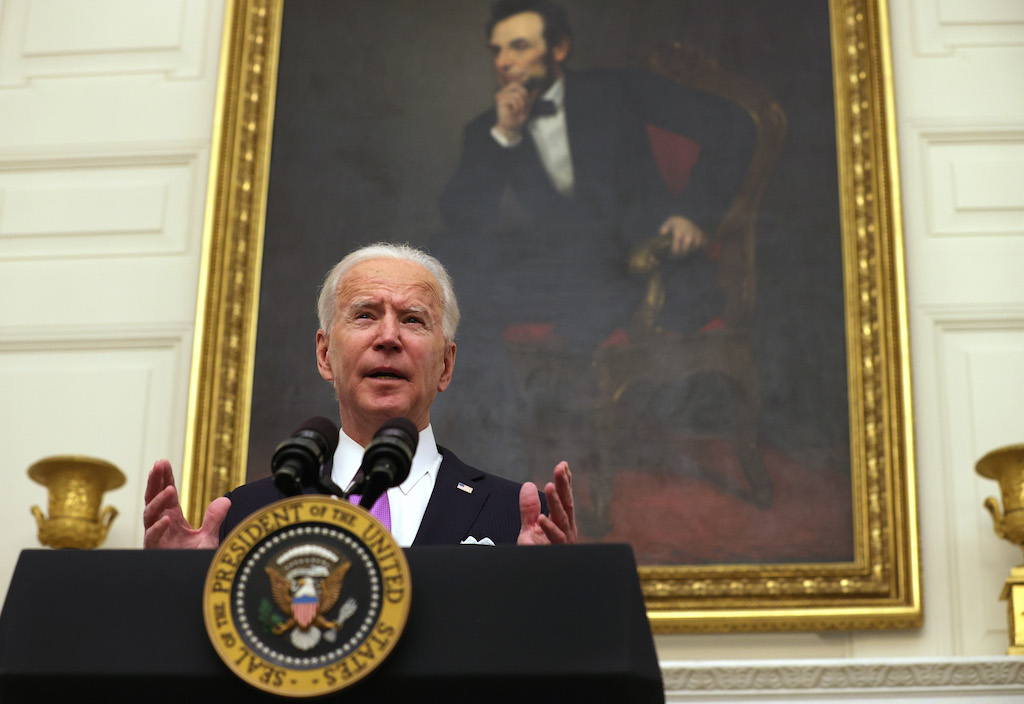 US President Joe Biden speaks during an event at the State Dining Room of the White House. AFP/Alex Wong/Getty Images

BROWNSVILLE - President Joe Biden faced mounting pressure Monday from Republicans over his handling of a surge in migrants -- including thousands of unaccompanied children -- arriving at the US-Mexican border.

While successive administrations have dealt with seasonal spikes in migration, Biden's critics claim he has driven the latest uptick by taking a softer stance on the flashpoint issue than his predecessor Donald Trump.

On January 20, his first day in office, Biden scrapped several of Trump's contentious immigration policies, including halting new construction of a border wall and proposing legislation to create a citizenship pathway for the nearly 11 million people living illegally in the US.

At a bus terminal in the border town of Brownsville late Sunday, a Guatemalan woman told AFP she had crossed the border illegally after her husband, who already is in the US, told her things may be simpler under Biden.

READ: Yellen says Biden has yet to decide on a wealth tax

"My husband told me to come at this time," said Rubia Tabora, a 25-year-old mother of one.

"At home there are no jobs, no money."

In February, the US Customs and Border Protection agency (CBP) arrested about 100,000 people at the southern border -- including nearly 9,500 unaccompanied children -- a 28-percent jump over January.

Republican Congressman Kevin McCarthy of California, who leads his party in the House of Representatives, told reporters last week the "crisis at the border is spiraling out of control."

"It's entirely caused by the actions of this administration," said McCarthy, who was planning a news conference later Monday in the Texas border town of El Paso.

In line with a pandemic-rooted policy adopted by Trump, who cracked down on immigration both legal and illegal as part of his "America First" doctrine, the Biden administration is deporting most of the undocumented people who arrive at the southern border.

But unlike Trump, Biden has opted against expelling minors who show up unaccompanied and are filling shelters set up to hold them, with limited capacity because of the coronavirus crisis.

The Biden administration over the weekend ordered the Federal Emergency Management Agency (FEMA) to support an effort to temporarily house thousands of children who crossed the US-Mexico border alone.

While migrant adults and families continue to be sent back to Mexico when they are caught, unaccompanied children are being processed and get help resettling with US relatives.

"Our goal is to ensure that unaccompanied children are transferred to HHS (the Health and Human Services department) as quickly as possible, consistent with legal requirements and in the best interest of the children," Homeland Security Secretary Alejandro Mayorkas said in a statement Saturday.

He said the numbers had reached "record" levels but dated the surge back to April 2020 and blamed ongoing violence, natural disasters, food insecurity, and poverty in parts of Central America.

A local activist told AFP about 200 migrants in family groups traveled on from the Brownsville bus terminal on Saturday, after receiving Covid-19 tests.

Such scenes are being repeated at towns along the vast border that spans four US states.

Most in Brownsville had turned themselves in after crossing the frontier and had been given paperwork requiring them to report to immigration authorities later on.

Chris Cabrera, a spokesman for a local Border Patrol union in Texas's Rio Grande Valley, told CNN that immigration numbers often surge around the time of an election or new presidency.

"A part of it is every election cycle, regardless of the political party that takes office. It gets interpreted in the southern countries a little different," he said.

The US Congress is this week considering two immigration bills.

One of them would grant several categories of migrant, including people brought to the country as children -- so-called "Dreamers" -- an immediate path to permanent residence.