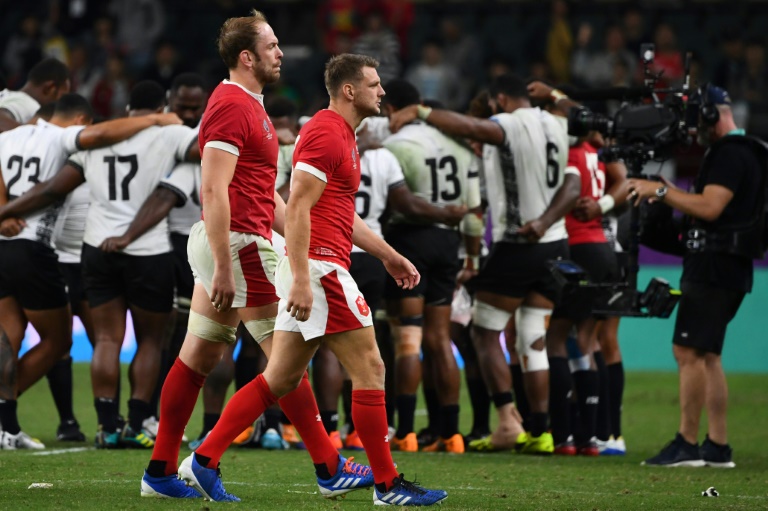 Dan Biggar (right) has been chosen as Wales captain for the tour of South Africa over Alun Wyn Jones (left). AFP/Gabriel Bouys

CARDIFF - Dan Biggar has retained the Wales captaincy for a three-Test series away to world champions South Africa in July even though Alun Wyn Jones is in the squad announced on Wednesday.

Fly-half Biggar took over leadership duties for this season's Six Nations while Jones continued his recovery from a long-term shoulder problem.

Former skipper Jones, rugby union's most-capped player of all time, returned to Wales duty in their Six Nations finale against Italy in March.

But the British and Irish Lions lock's joy at becoming the first player to win 150 caps for a single country was cut short by Italy's stunning 22-21 win in Cardiff that ended the Azzurri's seven-year wait for a Six Nations victory.

"We've obviously got great leadership in the group with Alun Wyn and Dan," said Wales coach Wayne Pivac after announcing a 33-man squad to face the Springboks.

"Dan did well in the Six Nations and Al has come back from a pretty big lay-off.

"He has had a little bit of rugby and we want him to hit his straps as a second-row and be the best player he can be and focus on playing."

Ospreys back George North is recalled 14 months after his last Test following a knee injury, while the uncapped pair of Leicester flanker Tommy Reffell and Cardiff No. 8 James Ratti have also been included.

Pivac will be without several injured players, including ace goalkicker Leigh Halfpenny and back-row Justin Tipuric.

Wales have won just four of their 12 matches since being crowned 2021 Six Nations champions and they have lost all 10 of their previous games against the Springboks in South Africa.

The first Test is in Pretoria on July 2, with the series continuing at Bloemfontein before finishing in Cape Town.