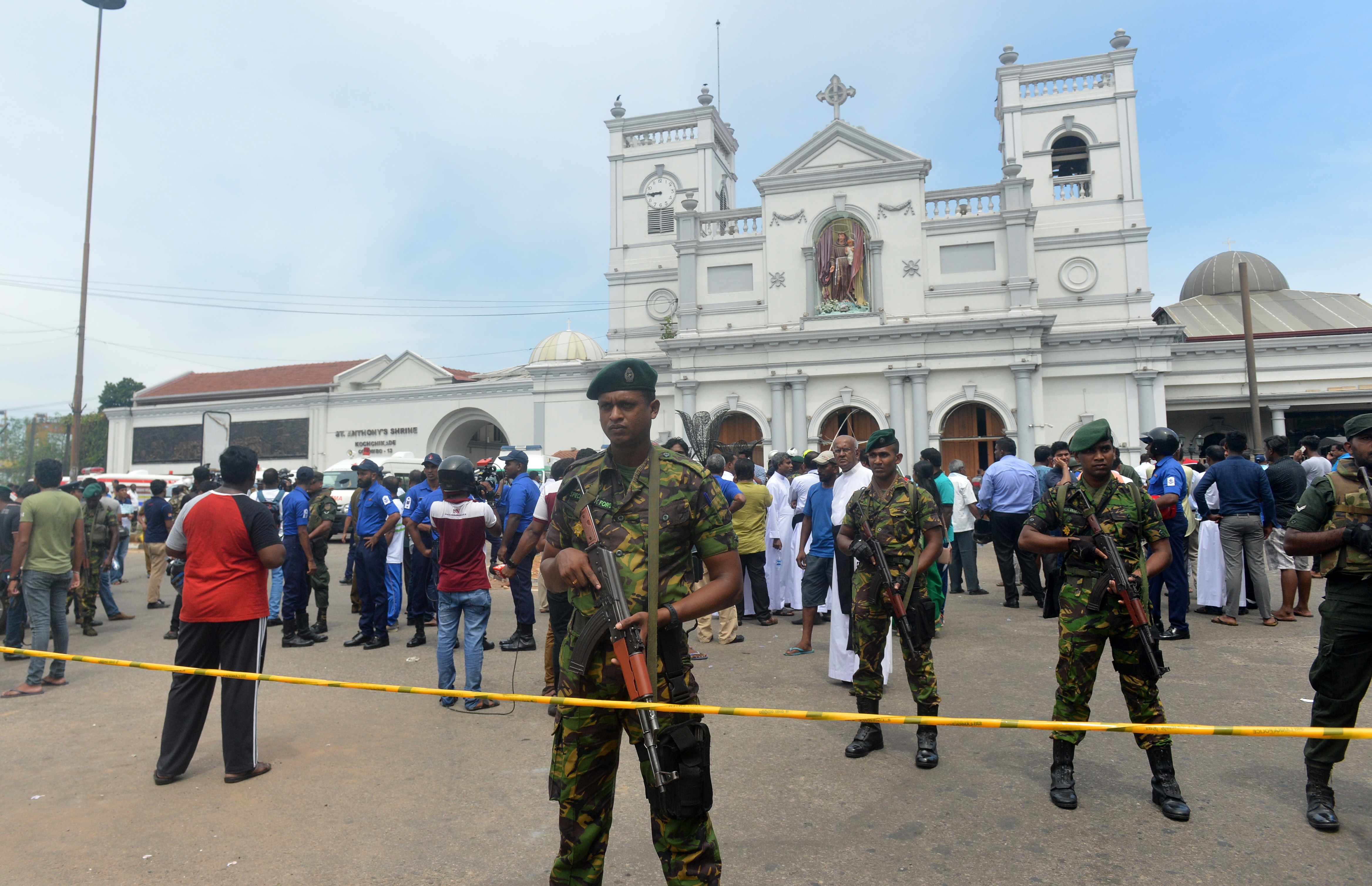 Sri Lankan security personnel keep watch outside the church premises following a blast at the St.

Explosions have hit three churches and three hotels in and around the Sri Lankan capital of Colombo, police said on April 21.

COLOMBO - A series of eight devastating bomb blasts ripped through high-end hotels and churches holding Easter services in Sri Lanka on Sunday, killing at least 207 people, including dozens of foreigners.

Prime Minister Ranil Wickremesinghe condemned the attacks -- the worst act of violence since the end of Sri Lanka's civil war a decade ago -- as "cowardly", as the government imposed an immediate and indefinite curfew across the entire country of 21 million people.

At least two of the explosions were carried out by suicide bombers, according to police sources and a hotel official, and police spokesman Ruwan Gunasekera said the authorities were investigating whether suicide attackers were involved in all eight of them.

Gunasekera told a press conference the death toll had risen to at least 207, with over 450 people wounded and that three people had been arrested.

Ravinatha Aryasinha, secretary to the foreign ministry, told reporters there were 27 bodies of suspected foreign nationals in the Colombo National Hospital.

A police official said earlier that 35 foreigners were among the dead and hospital sources said British, Dutch and American citizens had been killed, with Britons and Japanese also injured. A Portuguese man also died, the country's LUSA news agency reported.

The nature of the blasts was not immediately clear and there were no immediate claims of responsibility.

"A foreign intelligence agency has reported that the NTJ (National Thowheeth Jama'ath) is planning to carry out suicide attacks targeting prominent churches as well as the Indian high commission in Colombo," the alert said.

The NTJ is a radical Muslim group in Sri Lanka that was linked last year to the vandalisation of Buddhist statues.

The first blast was reported at St Anthony's Shrine, a well-known Catholic church in the capital Colombo.

A second deadly explosion was then confirmed at St Sebastian's, a church in the town of Negombo, north of the capital.

"A bomb attack to our church, please come and help if your family members are there," read a post in English on the church's Facebook page.

Soon after, police confirmed that a third church in the town of Batticaloa had been hit, along with three high-end hotels in the capital.

Hospital sources said British, Dutch and American citizens were among the dead, with Britons and Japanese among those injured in the attacks. 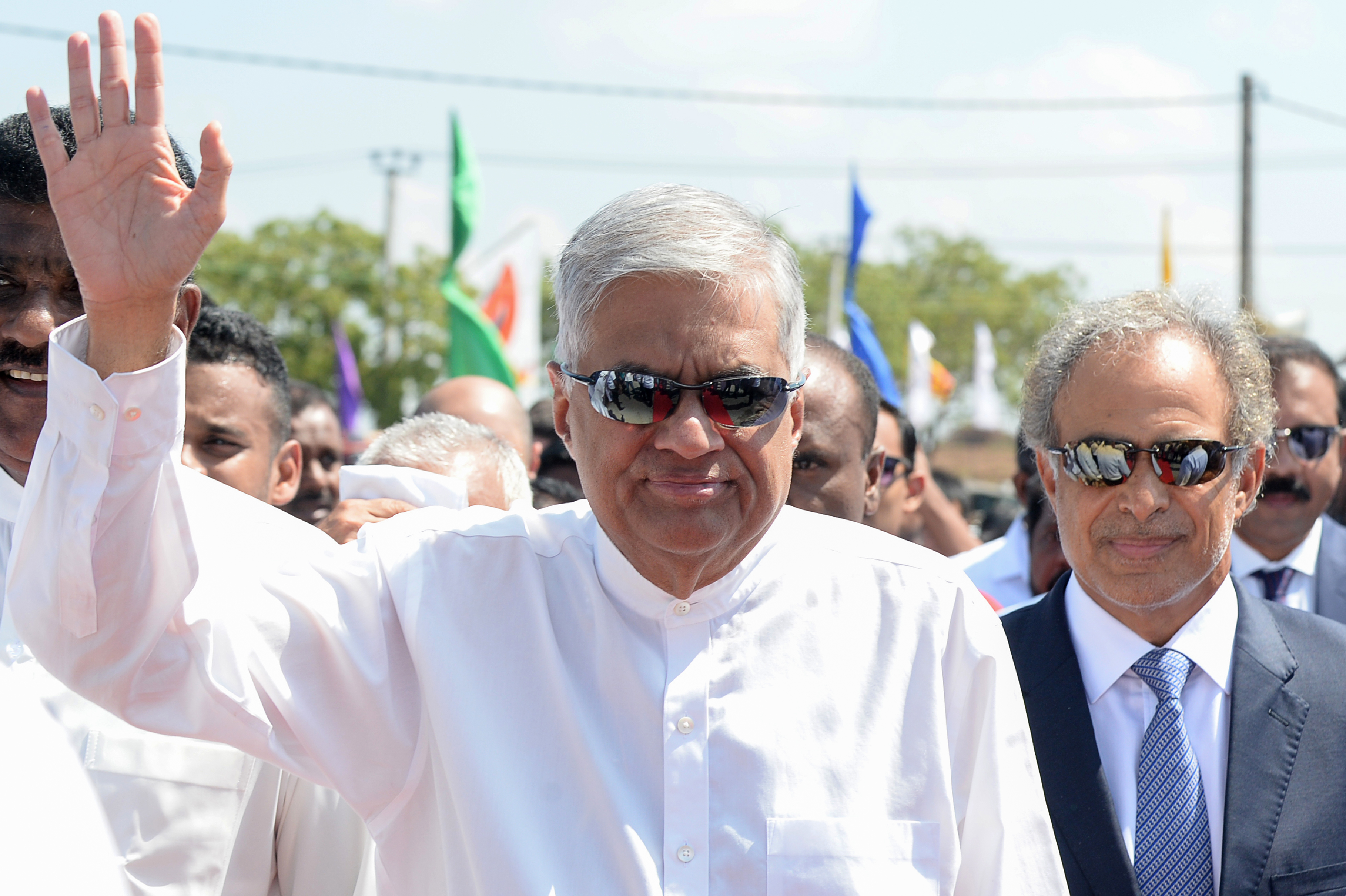 President Maithripala Sirisena said in an address that he was shocked by the explosions and appealed for calm, and the prime minister was expected to speak to the media shortly.

On Twitter, Wickremesinghe wrote: "I strongly condemn the cowardly attacks on our people today.

"I call upon all Sri Lankans during this tragic time to remain united and strong. Please avoid propagating unverified reports and speculation. The government is taking immediate steps to contain this situation."

The hotels targeted in the attack are all popular destinations for tourists, among them the Cinnamon Grand, which is near the prime minister's official residence in Colombo.

An official at the hotel told AFP the blast there had hit the restaurant and reported at least one person had been killed.

At the Shangri-La hotel, an AFP photographer saw extensive damage on the second-floor restaurant, with windows blown out and electrical wires hanging from the ceiling. 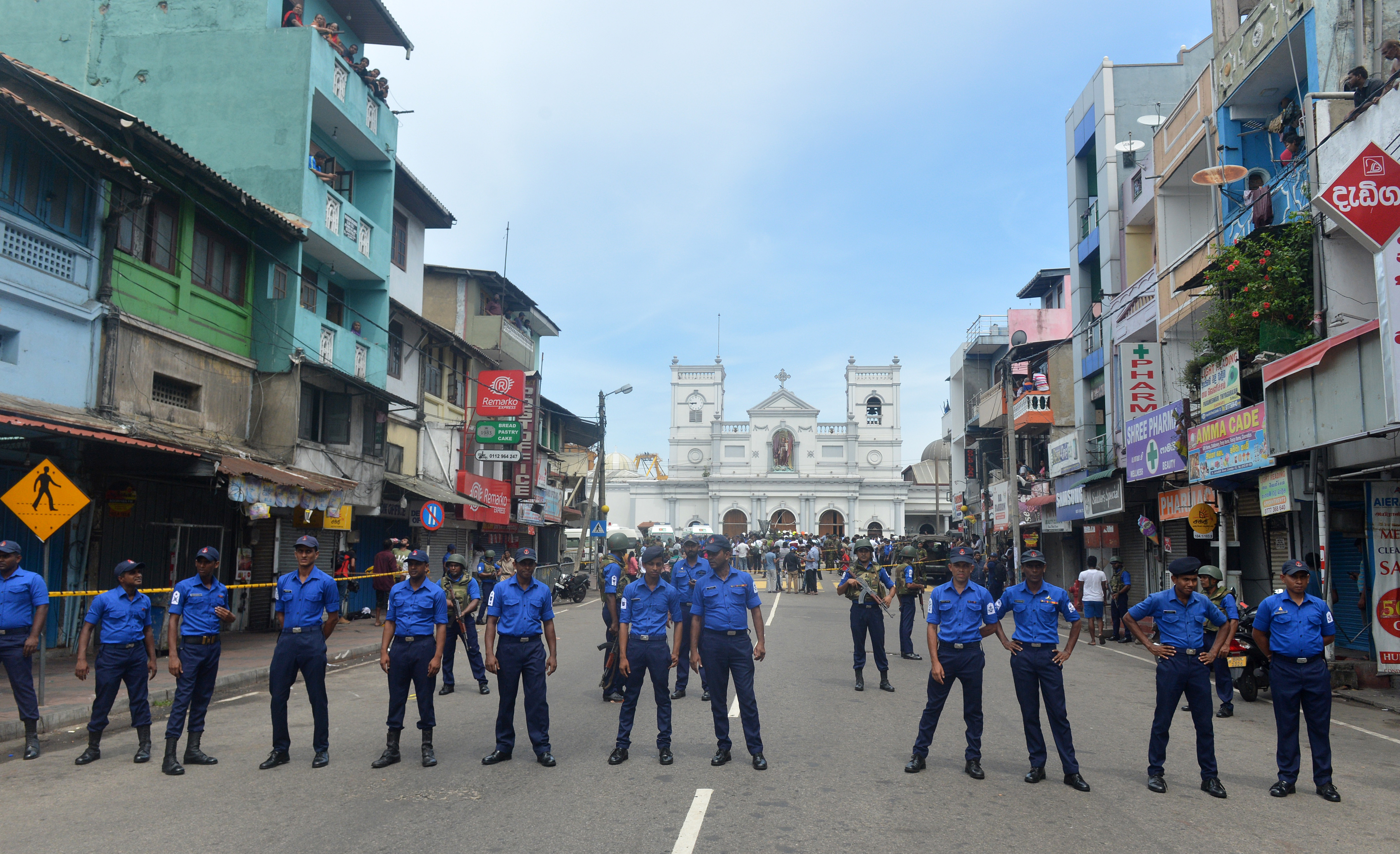 Sri Lankan security personnel keep watch outside the church premises following a blast at the St. Anthony's Shrine in Kochchikade, Colombo on April 21, 2019. Explosions have hit three churches and three hotels in and around the Sri Lankan capital of Colombo, police said on April 21.

He said he had been to two of the attacked hotels and was at the scene at St Anthony's Shrine, where he described "horrible scenes".

"I saw many body parts strewn all over," he tweeted, adding that there were "many casualties including foreigners".

Embassies in Colombo warned their citizens to shelter in place, and Sri Lankan Airlines told customers to arrive at the airport four hours ahead of flights because of ramped-up security in the wake of the attacks.

Only around six percent of mainly Buddhist Sri Lanka is Catholic, but the religion is seen as a unifying force because it includes people from both the Tamil and majority Sinhalese ethnic groups.

There have been no attacks in Sri Lanka linked to foreign Islamist groups, despite local media reports that a 37-year-old Sri Lankan was killed in Syria in 2016 while fighting for the Islamic State group.

In January, Sri Lankan police seized a haul of explosives and detonators stashed near a wildlife sanctuary following the arrest of four men from a newly formed radical Muslim group.