Boks prove difficult to break down ahead of World Cup 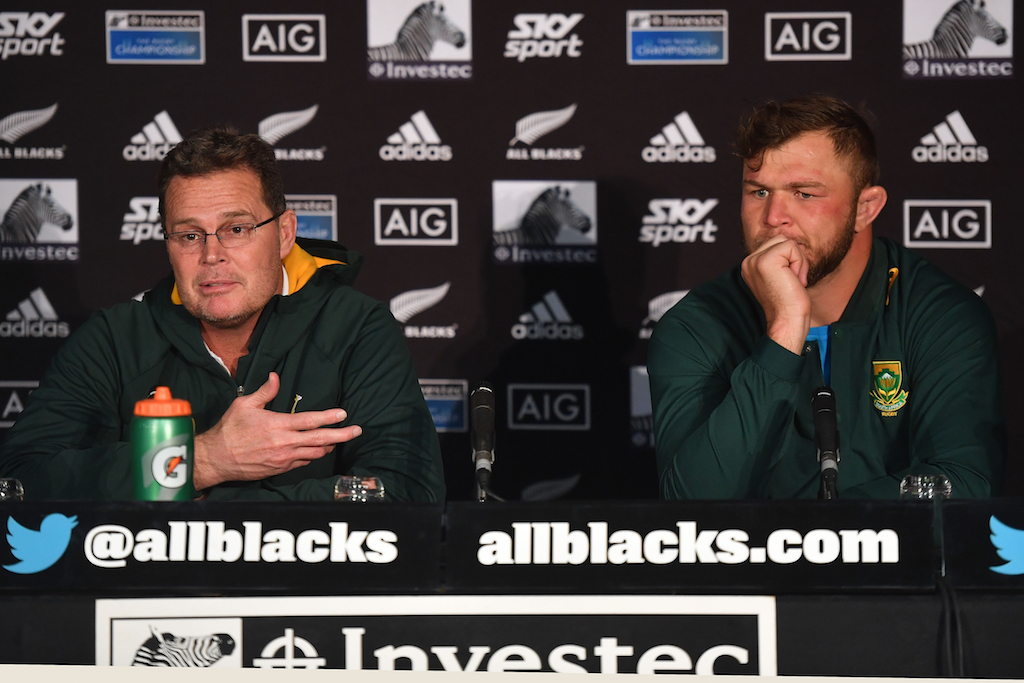 South Africa's head coach Rassie Erasmus (L) and captain Duane Vermeulen speak to the media in a post match presser after the Rugby Championship match at Westpac Stadium in Wellington on 27 July 2019.

WELLINGTON- Rassie Erasmus will take positives from Saturday's 16-16 draw with the All Blacks in the Rugby Championship but the Springboks coach thinks the result will be irrelevant when the teams next meet in the Rugby World Cup on September 21.

A last gasp try from Herschel Jantjies allowed the Springboks to remain top of the southern hemisphere championship on seven points, one ahead of the All Blacks, with one match left for all four sides.

South Africa travel to Salta to face the Pumas on August 10 before facing Argentina again in Pretoria and then a clash with World Cup hosts Japan on September 6.

That is all preparation for the Pool B opener against the world champion All Blacks in Yokohama - a match that is likely to have a significant impact on the playoff pathways for both sides.

READ: Leadership key for Boks against All Blacks

The winner of Pool B will face the runners-up of Pool A, which includes Ireland and Scotland, in the quarter-finals.

Erasmus admitted the Springboks were "lucky" to leave Wellington with a draw but felt it might provide his side with a little more self-belief ahead of their mouthwatering World Cup opener.

"When the World Cup comes this game will be irrelevant," he said.

"When you go over there it will be different, a neutral ground and different conditions.

"But we certainly take a lot of positives out of this. They are the world's number one team, they are the benchmark and that's where we want to be."

The Springboks are ranked fifth in the world and have lacked consistency in recent years, but against their traditional rivals they have proved mighty difficult to beat.

That humiliation proved to be a turning point.

The next four matches have been decided by no more than two points and the Springboks ambushed the All Blacks last year in Wellington with an upset 36-34 victory.

On Saturday, the Springboks were more controlled than the All Blacks in first half, but then had to rely on scrambling defence in the second to stay in touch with the world champions.

They never really threatened the All Blacks tryline until the very end of the match, though, and their big ball-running forwards found it difficult to carve out too much territory in the face of a tight defence. "That is the nature of test rugby," Erasmus added.

"I guess that's the way of playoff rugby, things are tight.

"We are not trying to do things too clever (and) we did look a little one dimensional on attack. "But we are building nicely towards the World Cup."