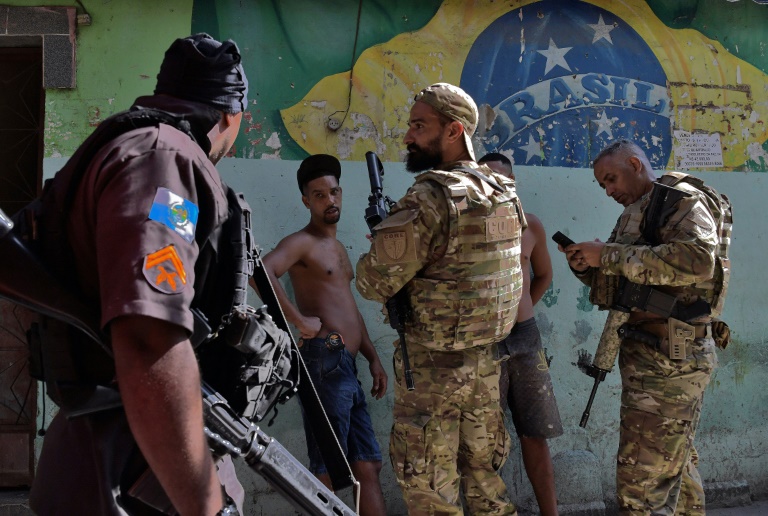 Brazil has one of the worst police violence problems in the world: last year, more than 6,100 civilians died in police operations and 183 officers were killed, according to figures from watchdog group The Violence Monitor.

In a country where shootouts involving law enforcement and heavily armed drug gangs are regular occurrences in the favelas, or slums, police also face frequent accusations of abuses and indiscriminate violence.

But officers are rarely held to account over the use of force, according to Cesar Munoz, senior researcher for Brazil at Human Rights Watch.

"Whenever the police are involved in a shootout and someone dies, the standard line is, 'We were on patrol, they attacked us, we responded and the attackers died,'" he told AFP.

"Body cams could be a useful way to both document the police's actions and protect them from unfounded accusations."

Typically around eight by six centimeters (three by two-and-a-half inches), the digital cameras are attached to the front of officers' uniforms.

They have delivered encouraging results in states where they are already in use in Brazil, such as Sao Paulo in the southeast and Santa Catarina in the south.

According to official figures, violent incidents fell by 87 percent among units using body cams in Sao Paulo, which implemented the measure last year, along with other changes, such as the use of non-lethal weapons.

In Santa Catarina, academic research found the cameras have been responsible for reducing the use of force by police by more than 60 percent since 2019.

The cameras are also credited with helping police provide more accurate accounts of incidents such as domestic violence.

- 'Piecing together a puzzle' -

Rio plans to start rolling out around 8,000 of the cameras on patrols in areas ranging from upscale beach neighborhood Copacabana to the favelas of Mare and Jacarezinho, state police said.

Jacarezinho was the scene of the bloodiest police shootout in the city's history in May last year when a massive anti-drug trafficking operation ended with 27 alleged suspects and one policeman dead. 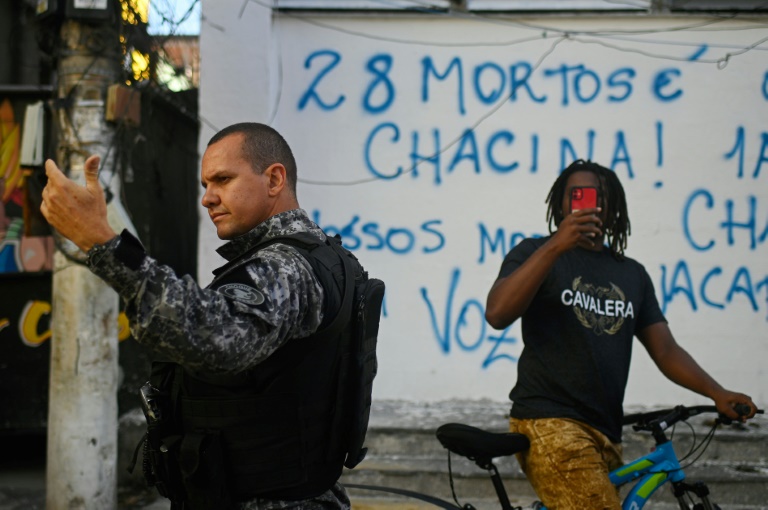 A resident records a video with his cell phone as an officer monitors a protest against police violence in the favela of Jacarezinho on May 6, 2022, the first anniversary of the deadliest police raid in Rio de Janeiro history

Body cams "would have helped determine what happened" in numerous deaths that day, prosecutor Andre Cardoso, the lead investigator on the case, told news site G1.

"When you search for evidence, you're trying to piece together a puzzle, reconstruct the situation. With video footage, you don't need anything else," Cardoso said, calling the cameras "indispensable."

Body cams could also help hold police to account over other accusations they face in Jacarezinho, such as invading people's homes and stealing from them -- as one resident documented with a hidden camera.

"They have to be part of a broader policy" that includes more training, psychological support for officers and truly independent investigations, he said.

Body cams are already widely used in the Americas, including in Canada, many parts of the United States, Mexico and Chile.

Their success in Brazil will depend on how they are used, said Melina Risso, research director at the Igarape Institute, a public security think tank.

"Will the camera automatically film 24 hours a day, or does it have to be turned on? Who supervises the recording? How long are the images stored? What is the chain of custody? How will officers' privacy and that of others be protected?" she said.

Rio state police told AFP their cameras would record automatically, with the images archived for around 90 days.

They said protocols on the cameras would be adjusted as necessary over time.