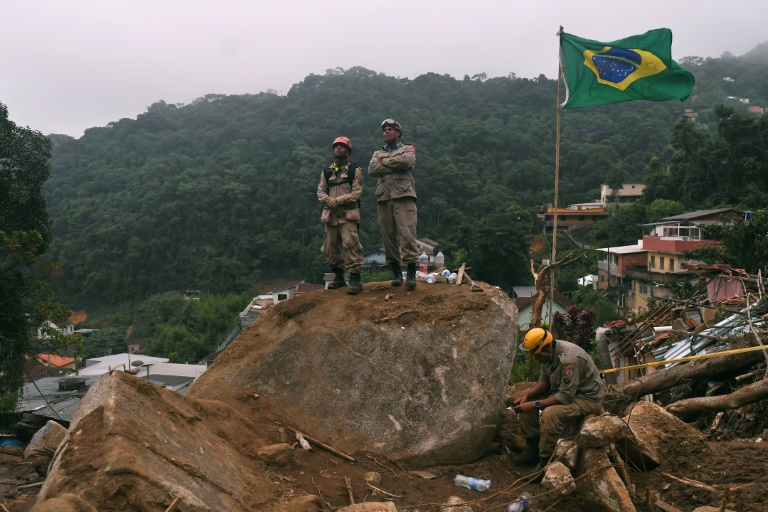 RIO DE JANEIRO - The death toll from torrential rains that triggered flash floods and landslides in the scenic Brazilian city of Petropolis has risen to 165, authorities said Sunday, as more violent storms killed two people in another region nearby.

Rescue workers and residents searching for their missing relatives continued digging through mountains of mud and rubble in Petropolis, which President Jair Bolsonaro said Friday looked like it had been through a "war."

It is unclear how high the steadily rising death toll will go. It is unlikely any more survivors will be found beneath the wreckage, authorities say.

The dead include at least 28 children, police said.

One person was crushed by a collapsing wall and killed in the city of Alegre, and another swept away trying to retrieve a car from severe flooding in the city of Nova Venecia, officials said.

The storms forced more than 1,200 people to evacuate their homes and destroyed another 43 people's houses, they said.

They are the latest in a series of deadly storms to hit Brazil, which experts say are made worse by climate change.

The storm turned streets in Petropolis into violent rivers that swept away trees, cars and buses, and triggered deadly landslides in poor hillside neighborhoods that ring the city of 300,000 people.

It dumped a month's worth of rain in several hours on the picturesque tourist town, which was the 19th-century summer capital of the Brazilian empire.

The city held what it called a "mega clean-up operation" Sunday, aided by 370 sanitation workers sent in as reinforcements from the nearby cities of Rio de Janeiro and Niteroi.

The mayor's office urged residents to stay home except in case of "extreme necessity" to let clean-up crews clear the piles of muck and debris still clogging streets.

Authorities have so far recovered more than 300 cars that were "strewn around the city, blocking streets and sidewalks or stuck in rivers," they said.

"We need our streets clear so we can speed up the job of getting our city back on its feet," Mayor Rubens Bomtempo said in a statement.

There is no word on when those who lost their homes or had to evacuate will be able to return to the hardest-hit areas, if at all.

At least 856 people are being housed in emergency shelters, according to officials.

A steady stream of funerals for victims meanwhile continued at the city's main cemetery, where the local government brought in extra grave-diggers as reinforcements.