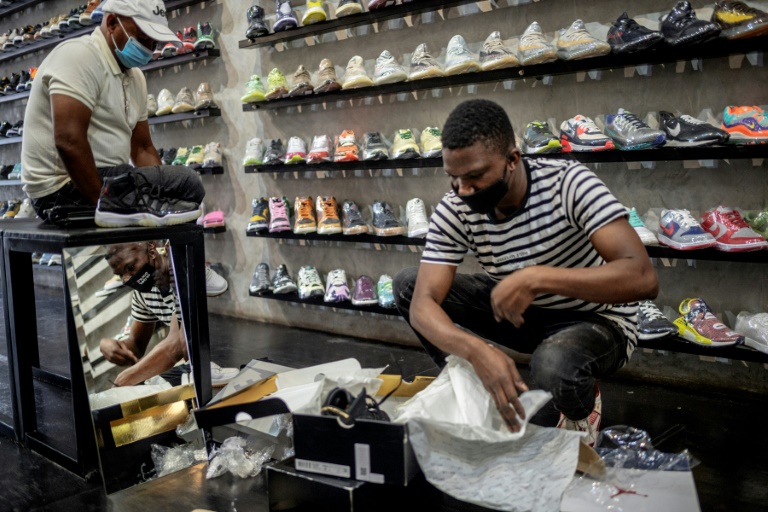 As a marker of personality as well as social status, they are cared for and worn with pride, and youths compete to hunt down the rarest models from a market flooded with old and new sneakers -- including many fakes.

"Sneakers kind of tell your story," graffiti artist Rasik "Mr.ekse" Green told AFP as he was spray-painting a commissioned mural on the rooftop of a building in downtown Johannesburg.

Green's elaborate graffiti designs -- which he also uses to redecorate and personalise sneakers -- are highly sought after.

The shoes are often an expression of geographic roots in a country with 12 official languages and dozens of ethnicities.

And residents of the Johannesburg township of Soweto "love their (Converse) All Stars", he said. "It's kind of a code."

Collecting and trading shoes has become a hobby in Africa's most industrialised nation, with aficionados known as "sneaker heads".

"That wouldn't have happened 30 years ago," Green said.

But another designer, Andile "ScotchIsDope" Cele, warned that sneaker fanaticism is "becoming about class."

Paying extravagant amounts for the shoes is "almost like an investment to say, you're helping yourself, so that you can live with these (wealthy) people... almost like 'fake it till you make it' type of thing."

As demand for sneakers has grown, local entrepreneurs have become fierce rivals to international brands.

Unable to afford the latest sneakers as a young boy, local designer Lekau Sehoana made his first pair of sneakers from worn-out shoes, old jeans and polyurethane.

Sehoana now uses part of the company's earnings to make shoes for children in townships.

"I guess it's one way of uniting us and bringing us together, as a people, as a country, as different races," Green said.

"Besides all our differences, at least we share one common thing... shoes."