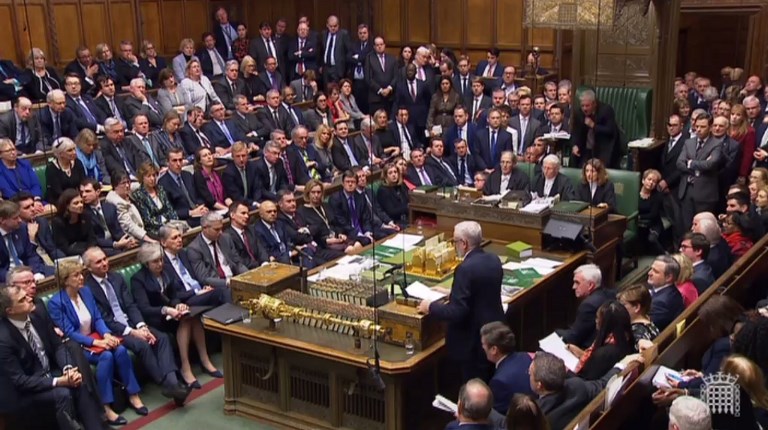 A video grab from footage broadcast by the UK Parliament's Parliamentary Recording Unit (PRU) shows Britain's main opposition Labour Party leader Jeremy Corbyn (R) standing to give his response and to table a motion of no confidence in the Government in the House of Commons in London on January 15, 2019, after MPs rejected the government's Brexit deal.

LONDON - Britain's parliament on Tuesday voted against Prime Minister Theresa May's Brexit deal by a massive margin, triggering a no confidence vote that could bring down her government.

The House of Commons lower house voted 432 to 202 against May's plan for taking Britain out of the European Union after nearly five decades, one of the biggest defeats ever suffered by a British premier.

The EU warned that the vote, which plunges Britain into uncharted waters, boosts the risk of a "no deal" Brexit.

The vote is set for Wednesday.

READ: May to make last-ditch plea to rebel MPs on Brexit deal

Speaking moments before the MPs cast their ballots, May said MPs had a "duty to deliver" on the results of a 2016 referendum that started the divorce.

"I believe we have a duty to deliver on the democratic decision of the British people," May said, warning MPs that the EU would not offer any "alternative deal".

"A vote against this deal is a vote for uncertainty, division, and the very real threat of a no deal," she argued to loud jeers from the packed chamber.

"The responsibility of each and every one of us at this moment is profound, for this is a historic decision that will set the future of our country for generations."

Theresa May's Brexit deal is rejected in the UK Parliament. And a vote of no confidence in her government will be debated in the within next 24 hours.Courtesy #DStv403

Most lawmakers have always opposed Brexit, as have some leading members of May's government, creating an inherent contradiction that has torn apart the island nation.

And with just over two months to go until the scheduled March 29 departure, Britain still cannot decide what to do.

READ: May warns halting Brexit would be catastrophic

May must now decide whether she tries to hold another vote, gets kicked out of office, delays Brexit -- or if Brexiteven happens at all.

As their nation's fate was being decided, hundreds of noisy supporters and opponents of Brexit, some banging drums and others driving floats with huge dolls mocking top UK politicians, rallied outside the ancient parliament building in London.

"It could end up being the day that will lead to us leaving with no deal!" said 25-year-old Simon Fisher, who backs a swift and sharp break with the EU.

A much larger rally nearby in support of a second referendum turned Parliament Square into a sea of EU flags.

One pro-Brexit activist attempting to join the rally was detained by police to shouts of "scum" from fellow protesters in an indication of rising tensions.

Others voiced their support for a second referendum, an option May's government rules out.