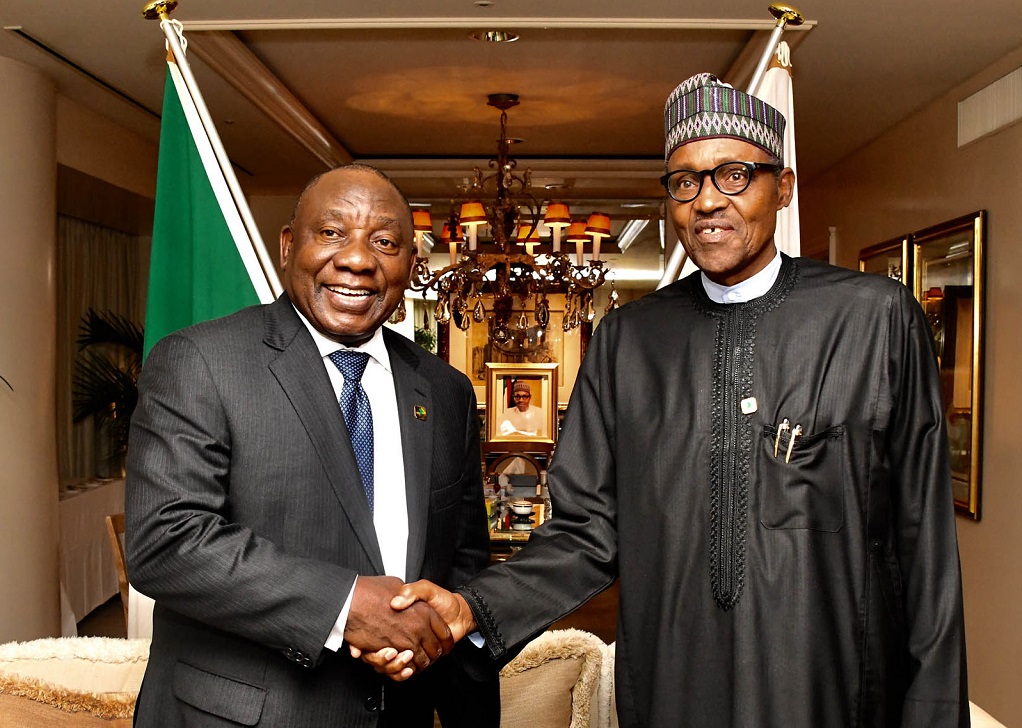 File: President Cyril Ramaphosa holds a meeting with Nigerian President Muhammadu Buhari in Yokohama, Japan during the 7th Tokyo International Conference on the Development of Africa.

LAGOS - Nigerian President Muhammadu Buhari heads to South Africa on Wednesday for a state visit after an outburst of xenophobic violence in and around Johannesburg stirred tensions between Africa's leading economic powerhouses.

Buhari and his South African counterpart Cyril Ramaphosa will meet on Thursday to discuss bolstering trade ties and political cooperation as both struggle to kickstart their stuttering economies.

But the recent violence in South Africa targeting foreigners - including Nigerians - threatens to dominate the talks.

The three-day state visit, the first by a Nigerian leader since 2013, was planned before mobs descended on foreign-owned properties in and around Johannesburg in early September.

The violence - in which at least 12 people were killed - sparked fury in Nigeria and saw hundreds of migrant workers repatriated to the country.

Some South African businesses in Nigeria were forced to close shop temporarily after they were targeted by revenge attacks.

The two governments dispatched special envoys to each other's capitals as Pretoria offered "sincere apologies" in a bid to calm the anger.

WATCH: Nigerians' side of the story

The presidency in Abuja said Buhari would use the state visit to discuss the "welfare of Nigerians, and find common grounds for building harmonious relations with their hosts".

He will hold a "town hall meeting" with Nigerians living in South Africa to listen to their experiences and show the government is working to protect them.

Buhari is expected to push Ramaphosa to pay reparations for the Nigerians impacted by the violence but the South African authorities look set to reject those demands.

South Africa's presidency did not mention the xenophobic violence at all in its announcement of the visit.

It instead focused squarely on attempts to bolster trade and business as Africa's two largest economies both look to improve on tepid growth.

The leaders will attend a business forum and chair a meeting of the South Africa-Nigeria Bi-National Commission designed to boost cooperation between the two countries.

The relationship hit a high in the early 2000s when former presidents Thabo Mbeki and Olusegun Obasanjo worked together to take a leading role in continental politics.

Since then a string of legal disputes between South African mobile giant MTN's and the Nigerian authorities has clouded ties.

The telecoms firm has now resolved most of the long-running wrangles and in May floated its shares on the stock exchange in the West African country.

Buhari, who won a second term in February, is looking to diversify Nigeria's economy away from oil and South Africa could prove a key partner in boosting its agricultural and mining sectors.

But, despite signing up to a landmark African free trade agreement in July, he has been making protectionist moves by ordering increased restrictions on food imports and blocking the flow of goods from neighbouring Benin and Niger.

Analysts said that despite incentives to improve ties, Buhari's visit appears unlikely to radically bolster relations between the two countries.

"What we are seeing in the relationship is years of bad management on both sides," said Cheta Nwanze, head of research at Nigeria's SBM Intelligence.

"That won't change dramatically because of this visit - if it is to improve then it needs sustained commitment at the highest levels."