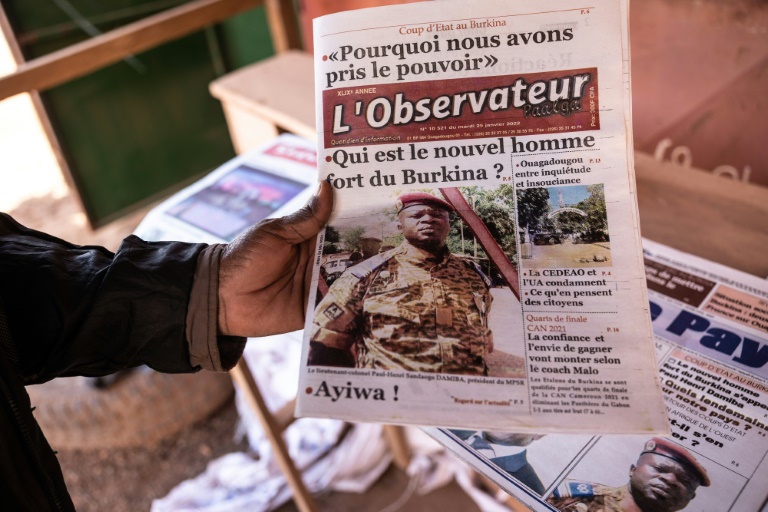 'Who is Burkina's new strongman?' asks the headline of this newspaper

PARIS - As Burkina Faso's junta consolidates its position after seizing power in a coup, we look at the recent history of the troubled West African country.

Blaise Compaore takes power in a 1987 coup and cements his position four years later with the first of four election victories. But his 2010 win is contested, as is his attempt to amend the constitution to extend his rule. After being forced out by street protests in 2014, he flees to Ivory Coast. On November 29, 2015, former prime minister Roch Marc Christian Kabore is elected president.

From 2015, the north of the country, the capital Ouagadougou and the east begin to suffer attacks and kidnappings by jihadists affiliated to Al-Qaeda or the so-called Islamic State.

On January 15, 2016, an attack on the Splendid hotel and a restaurant in Ouagadougou leave 30 dead, most of them Westerners, shocking the country.

The end of that year sees a state of emergency declared in several provinces.

From 2019, the attacks become almost daily, prompting the sacking of the head of the armed forces and formation of a new government.

On December 24, 42 people die in an attack by 200 jihadists on a military base in Arbinda, near the border with Mali.

Kabore is re-elected on November 22, 2020, but insecurity means hundreds of thousands of people are unable to vote.

The opposition accuse the president of election fraud and refuse to recognise the result.

Between 132 and 160 people are killed in a June 2021 raid on the northeastern village of Solhan in the worst attack in six years.

The killings spark demonstrations against insecurity and the ministers of defence and security are both fired.

On August 18, an attack in the north leaves 65 civilians and 15 police dead.

In October the president replaces the military chief of staff. A trial also begins into the killing 34 years earlier of charismatic former president Thomas Sankara, the "African Che Guevara". Compaore, the main accused, is not present.

On November 14, at least 57 people, 53 of them gendarmes, are massacred in an assault on a police station at Inata in the north, sparking further protests.

Burkinabe and Niger military say they eliminated around 100 "terrorists" during an operation on their common border between November 25 and December 9.

December 8, the prime minister resigns and hands the reins to Lassina Zerbo, who urges national unity.

On December 23, 41 people are killed in yet another jihadist attack in the north.

The past month sees n a further spate of attacks and rumblings of discontent in the ranks of the armed forces echoing those in the wider population.

On January 22, police in Ouagadougou clash with demonstrators at a banned protest over the government's handling of the jihadist threat.

World leaders have condemned a military coup in Burkina Faso. The army has announced it's deposed President Roch Kabore and suspended government. The coup comes after anti-government protesters vented their frustration over the killing of civilians and soldiers by militants, some linked to the Islamic State and al-Qaeda. eNCA's Duty Editor Crystal Orderson unpacks this story. Courtesy #DStv403

The following day soldiers at several army barracks stage a revolt but the government denies a coup is under way.

On Monday, Kabore is arrested by mutinous soldiers after gunshots are heard near his private residence.

A group of officers later go on television to announce that the Patriotic Movement for Preservation and Restoration (MPSR) -- the name of a junta led by Lieutenant-Colonel Paul-Henri Sandaogo Damiba -- is in control.

The United Nations, France and regional bloc ECOWAS all condemn the coup.