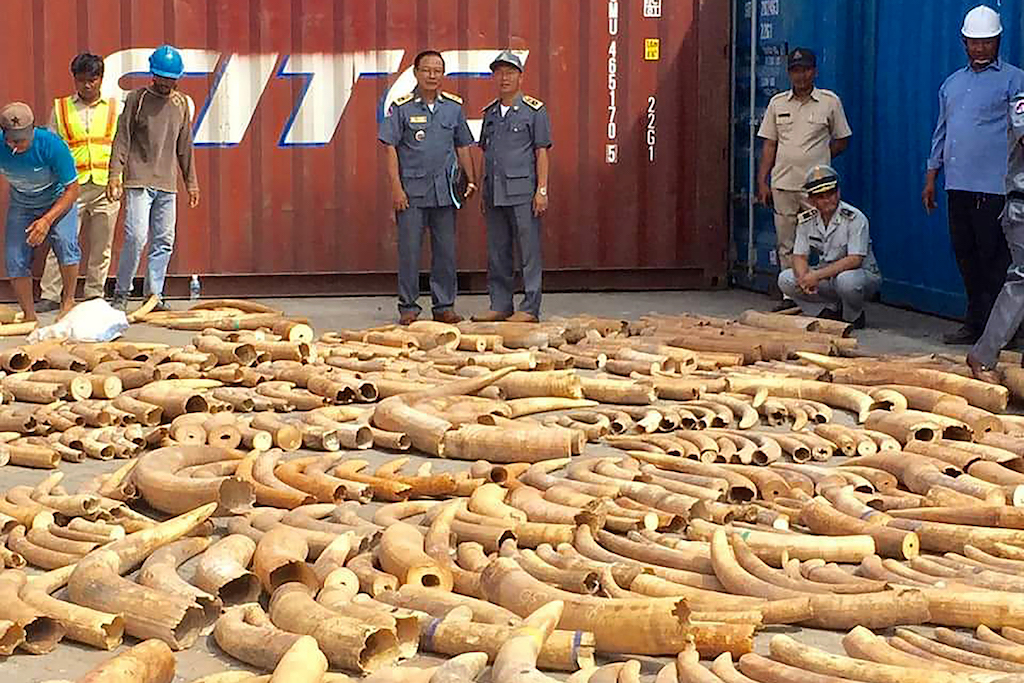 Cambodian Customs and Excise Officials looking at ivory seized from a shipping container at the Phnom Penh port.

The discovery Thursday of 1,026 tusks at the Phnom Penh Autonomous Port followed a tip from the US embassy, the official said, and highlights Cambodia's emergence as a key regional transit point for the multibillion-dollar trade in illicit wildlife.

"The elephant tusks were hidden among marble in a container that was abandoned," Sun Chhay, director of the Customs and Excise Office at the port, told AFP.

He said the ivory was sent from the southern African nation of Mozambique and arrived at the port last year.

The unidentified owner of the shipment did not arrive to pick up the cargo.

Pictures of the massive haul showed long rows of confiscated tusks spread out on the ground at the port.

Sun Chhay said he did not know whether the shipment was destined for markets in other countries.

Demand from China and Vietnam has fuelled the growth of illegal wildlife trafficking via Cambodia.

Weak law enforcement and corruption attract wildlife smugglers, especially at a time when neighbouring Thailand is cracking down on the banned trade.

Ivory is prized for its beauty while the market in traditional medicine has led to the smuggling of rhino horn and pangolin scales.

Cambodia has a miniscule elephant population but its emergence as a new trafficking hub has resulted in several headline-grabbing busts over the past five years.

The largest before this week occurred in 2014, when Cambodian customs seized about three tonnes of ivory hidden in a container of beans at the southwestern port of Sihanoukville.

Last year, Cambodia also seized nearly a tonne of ivory hidden in hollowed-out logs discovered inside an abandoned container, owned by a company based in Mozambique.