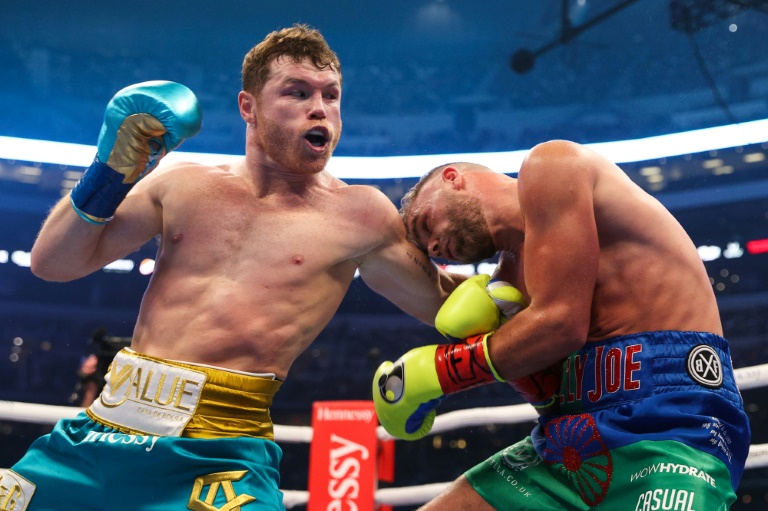 Saul "Canelo" Alvarez lands a big left-hand on Billy Joe Saunders during their super middleweight title fight in Arlington in fromt of a record 70,000-plus fans

ARLINGTON - Saul "Canelo" Alvarez stopped Billy Joe Saunders in eight rounds on Saturday to unify three super-middleweight titles in front of the largest US crowd in history to watch an indoor boxing event.

Four-weight world champion Alvarez retained his World Boxing Council and World Boxing Association titles and seized Saunders' World Boxing Organization belt when the previously undefeated Briton retired on his stool after taking a beating in the eighth round.

Alvarez won by technical knockout after Saunders' corner called a halt in front of 73,126 fans at AT&T Stadium, which was also the biggest to watch an American sports event since the coronavirus pandemic.

Saunders didn't budge from his stool saying he couldn't see out of his right eye which was badly swollen from Alvarez's precision blows.

Alvarez could sense victory in the eighth as he chased the southpaw around the ring waving his arms in the air as if to let the pro-Mexican crowd know that the end was near.

Saunders headed from the ring to the hospital to get medical treatment on his injured eye.

The previous largest indoor crowd for a boxing card in the United States had been 63,350 for Muhammad Ali's rematch against Leon Spinks in 1978.

The 31-year-old Saunders, who dropped to 30-1 with 14 KOs, had during fight week argued, and won, his case to increase the size of the ring from 20 feet to 22 feet. But no amount of extra space was going to allow him to escape Alvarez's devastating punching power.

The victory serves as another step in Alvarez's quest to dominate the 168-pound (76-kilogram) division.

The Mexican pound-for-pound king's only career loss to date came as a 23-year-old against the legendary Floyd Mayweather Jr in 2013. He has 13 wins and a draw since losing to Mayweather by majority decision.

On Saturday night, the 30-year-old Alvarez bided his time until he could impose his will on Saunders, who had never faced an opponent of this magnitude.

Everything changed in the eighth and the end came suddenly for Saunders as the fight came down to Alvarez's power and speed and the boxing skills of Saunders.

But to his credit Saunders proved to be a tough opponent for the Mexican to catch in the early rounds. 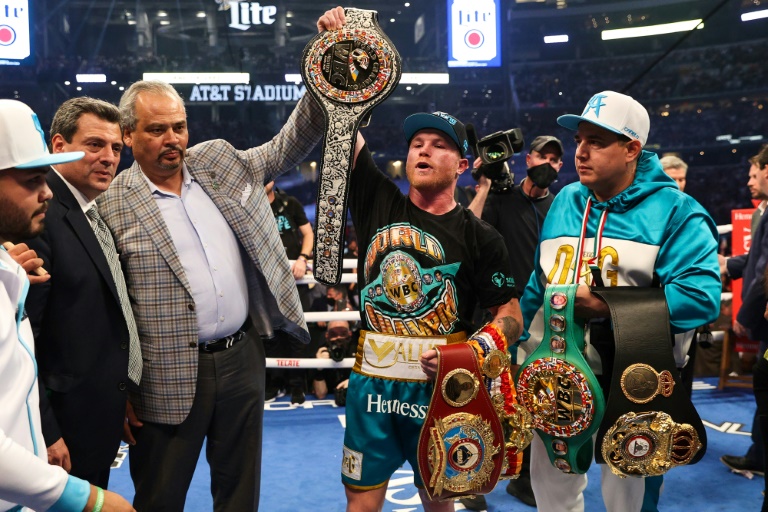 One title to go: Saul "Canelo" Alvarez shows off his championship belts after defeating Billy Joe Saunders during their super middleweight unification fight

Alvarez had his way in the eighth as Saunders tried to duck and clinch his way through the round, but he was inflicting too much pain and the Briton's right eye was closing fast.

Alvarez often brutally overpowers his opponents before knocking them out and even though that wasn't the case in Arlington, he followed the game plan set out by his trainers to perfection.

"I said before the fight that it was going to develop by seventh and eighth round," Alvarez said. "I was winning round by round.

"I started to adjust really quick."

Alvarez has now beaten seven English challengers in his career. That streak began with a points decision against Matthew Hatton when Alvarez was 20 years old in 2011, continued through a victory over Liverpool's Callum Smith in December, and now includes former WBO middleweight champion Saunders.

The one remaining title for Alvarez to win in the super-middleweight division is the International Boxing Federation belt held by unbeaten American Caleb Plant, 21-0 with 12 knockouts.

Alvarez was fighting for the third time in six months and now he wants to fight Plant as soon as possible.

"I am coming man, I am coming my friend," said Alvarez, who is trying to become the first Mexican-born fighter to hold all four belts in one division.

"That's the fight that has to happen for boxing -- the undisputed championship at 168 pounds," said promoter Eddie Hearn. "It's the must-make fight next. What's Caleb Plant going to do?"