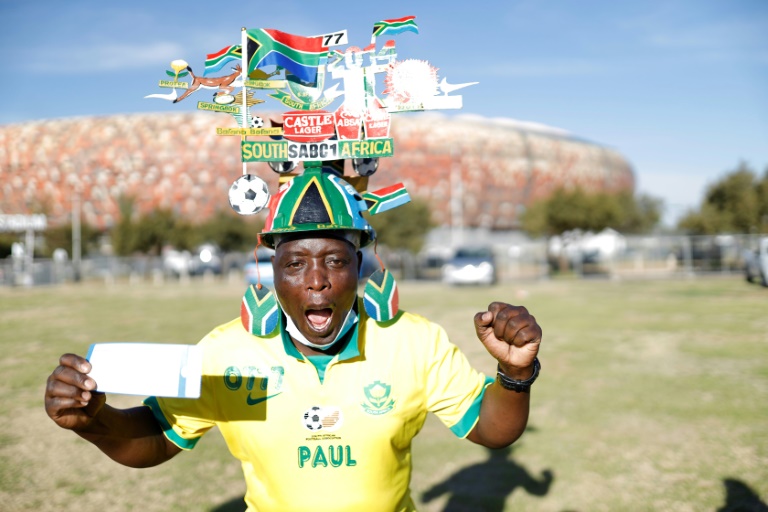 JOHANNESBURG - "Welcome back," speakers blasted from the entrance of South Africa's main sports stadium in Soweto as excited football fans -- vaccination cards in hand -- arrived for the first time in 18 months.

"Please make sure you sanitise your hands," the metallic voice reminded the 2,000 spectators lucky enough to get their hands on the first tickets sold since coronavirus hit.

The match, a World Cup qualifier between South Africa and Ethiopia, sold out in two hours.

"It has been a long journey, we have all been waiting for this for a long time," said Bafana Bafana supporter Paul Nkosi, 49, in an blue hard hat mounted with a crown of metallic multi-coloured South African miniature flags.

"When I managed to grab a ticket I thought: Jesus, I'm so lucky," he exclaimed, clutching a gold papier-mache trophy, eyes tearing with emotion.

Inside the stadium rules are strict: no booze, no hugging. Keep a seat between your neighbour and a face mask on at all times.

Vuvuzela horns, a hallmark of the 2010 World Cup in South Africa, were also banned to avoid droplets spraying.

"I'm not so happy about that," admitted law student Anita Gwente, 26, the South African flag draped over her shoulders, matching the red in her hair. 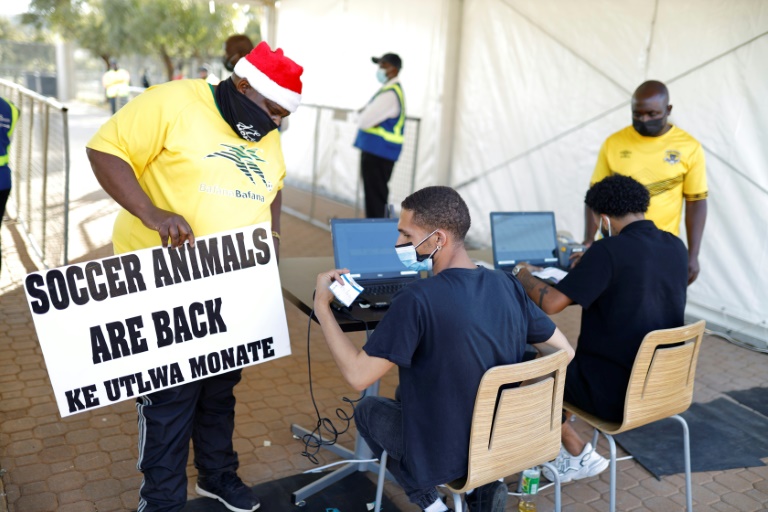 Vaccine check: fans needed to show proof they had been jabbed

She is relieved that at least singing is allowed.

A group of Ethiopian supporters sulked nearby. Unable to buy tickets online, they arrived four hours early in the hope in finding a way in.

"We haven't even had lunch because we want to watch," said Adisse Tagsse, 41, a Johannesburg-based Ethiopian businessman.

Scuffles broke out later as they tried to force their way through, breaking through a barrier before being stopped by security.

Stadiums opened just days after the rollout of electronic Covid-19 vaccine certificates, although most people still only had paper proof.

The country, grappling with vaccine hesitancy, particularly among men, hopes the requirement will spur more people to get jabbed.

Around a quarter of the targeted population has been vaccinated so far.

"This is a pilot project," head of Stadium Management South Africa, Bertie Grobbelaar.

If successful, it will pave the way for stadiums to gradually resume full capacity.

South Africa is continent's hardest-hit by the pandemic, recording over 2.9 million coronavirus cases, of which more than 88,300 have been fatal.

Inside the colossal 95,000-capacity FNB Stadium in Soweto, which hosted the 2010 World Cup final, fans cheered loudly as the teams walked in, shouting the national anthem at the top of their lungs, lyrics muffled behind masks.

Ushers glancing over their shoulders at the match reminded spectators to keep their distance and faces covered.

"It is empty but I still feel so overwhelmed," said student Sakhile Ngoni, 30, sharing a packet of crisps with friends before kick-off.

"We are not going to be able to enjoy it like we normally do but it's better than nothing," he said. 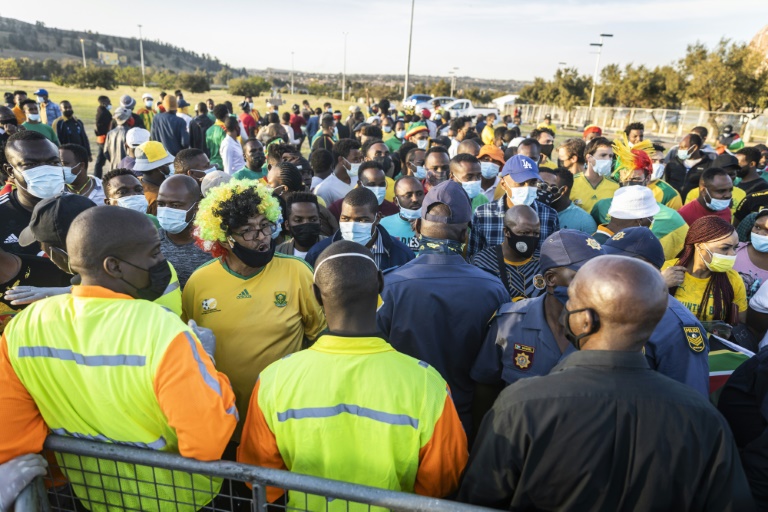 Let us in: Ticketless fans of both nations wanted to get in to the match

Live sport was cancelled in March 2020 as the nation went into a hard lockdown.

Fifteen minutes into the game, Bafana Bafana scored and the crowd erupted.

"Goal!", they shouted, waving their flags and punching fists in the air.

For a split second rules were forgotten, furtive hugs and slaps on the back exchanged, then everyone slid back into their seats.

That was the only goal of the game as South Africa won 1-0 to sit top of their World Cup qualification group.