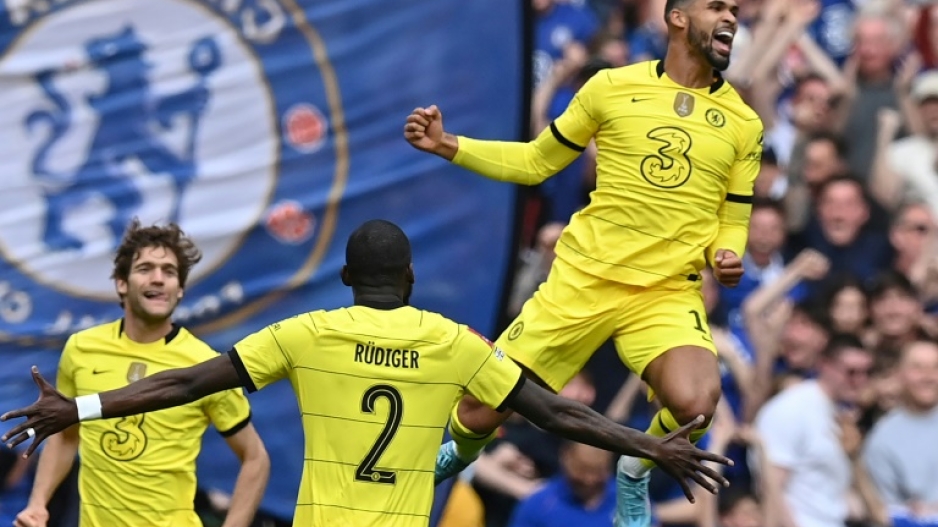 Tuchel's side had to work hard to break Palace's stubborn resistance in the semi-final at Wembley, but Ruben Loftus-Cheek's ferocious strike put them on course for a third successive FA Cup final appearance.

Mason Mount put the result beyond doubt with a fine finish of his own, ensuring Chelsea of a date with Liverpool in the final at Wembley on May 14.

It will be Chelsea's fifth FA Cup final in the last six years as they look to make amends for losing in the showpiece against Arsenal and Leicester in 2020 and 2021 respectively.

It was a welcome tonic after Tuesday's painful Champions League quarter-final exit at Real Madrid, where the Blues scored three times to overturn a 3-1 first-leg deficit only to go out after extra time.

"I thought the performance was very controlled and very serious. It was hard, the opponent changed system twice, but we took care of their counter-attacks," Tuchel said.

"It was very challenging physically and mentally. We are the team with the most minutes in Europe."

Tuchel has won the Champions League, Club World Cup and UEFA Super Cup in his reign, but he is yet to lead Chelsea to a domestic trophy.

With three consortiums in the running to buy Chelsea following the British government's sanctions on Russian billionaire Roman Abramovich after the invasion of Ukraine, the Blues could have a new owner by the time they return to Wembley.

Beating Palace keeps them in contention to end a troubled season with silverware, although Liverpool, who beat Premier League leaders Manchester City 3-2 in Saturday's semi-final, will provide far tougher opposition.

The Reds have already beaten Chelsea in the League Cup final on penalties this season and Tuchel knows how tough it will be to avenge that loss.

"We will be well prepared because we play against one of the best teams in the world. They are in outstanding form. It will be another hard fight," he said.

"I don't care about the trophies they try to win. We were unlucky to lose in the shoot-out in the League Cup.

"We will try to make it hard for them. It is unbelievably difficult to beat them. But that is what a cup final is about. We need everything at the top level."

Palace boss Patrick Vieira added: "In the first half we frustrated them a lot. Against these teams it is about taking your chances. We didn't and they did."

Faced with a Palace side that were tigerish in the tackle and well-drilled in their low defensive block, Chelsea found it hard to impose themselves.

It took Tuchel's men 25 minutes to muster a chance and even then Kai Havertz's looping header was easy for Palace keeper Jack Butland.

They lost Mateo Kovacic to an injury moments later, with Loftus-Cheek introduced against the team he once played for on loan.

Palace were nearly rewarded for their gritty display just before half-time.

Cheikhou Kouyate's drive from the edge of the area was pushed out by Edouard Mendy and Joachim Andersen slammed the rebound against the post from close range.

Chelsea had more possession in the second half, although Kouyate went close again, heading narrowly wide from Eberechi Eze's corner.

To their credit, Chelsea never lost their patience and they finally took the lead from just their second shot on target in the 65th minute.

Loftus-Cheek picked out Havertz in the Palace area and the German clipped a pass back to the midfielder, who slammed a superb strike past Butland from 12 yards.

Chelsea had a spring in their step at last and Mount finished Palace off in the 76th minute, taking Timo Werner's pass in his stride before slotting home.