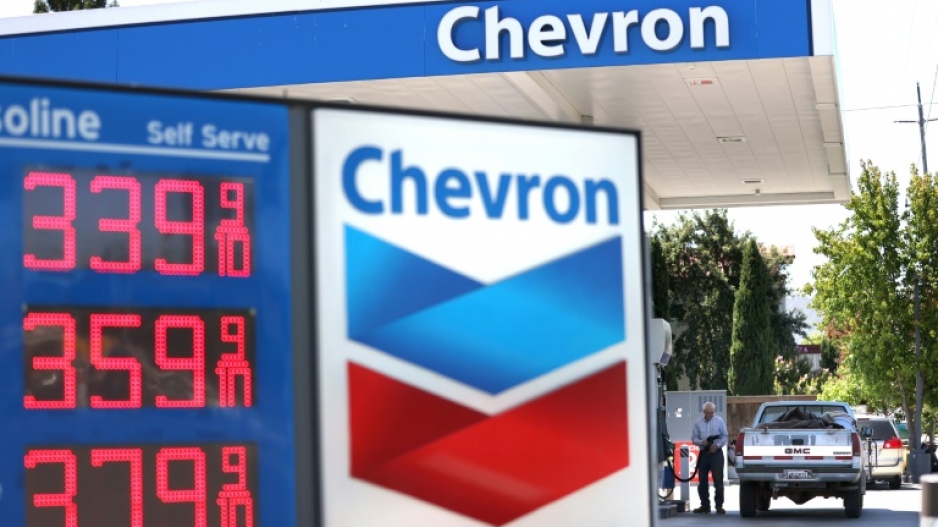 Chevron plans to boost investment in "lower carbon" energy, while investing primarily in oil and gas

NEW YORK - Facing pressure from environmentalists, Chevron boosted spending Tuesday for "lower carbon" ventures and unveiled plans to reduce emissions from its operations in a pitch that drew shrugs from climate activists.

The US oil giant said it would more than triple spending through 2028 to $10 billion on its "lower carbon businesses," including on products like aviation fuel made from biofeedstocks instead of crude oil.

"We believe climate change is real and that human activity, including the use of fossil fuels, contributes to it," Chief Executive Mike Wirth said at the outset of an investor presentation.

"We believe the future of energy will be lower carbon and intend to be a leader in that future."

But the strategy -- which keeps the vast majority of Chevron's capital budget going to fossil fuels -- drew little praise from critics.

Like its US rival ExxonMobil, Chevron has faced intensifying pressure from environmentalists as well as mainstream investors, and shareholders have voted against their recommendations at annual meetings earlier this year.

"We're pleased that Chevron finally wants to talk about the energy transition. We're pleased that they're increasing spending on lower-carbon energy," said Mark van Baal, founder of Follow This, a Dutch activist shareholder group. "But this is by far not enough."

Chevron's increased investment in lower-carbon energy is "encouraging," but "it's hard to see" how bringing renewable fuels to seven percent of refineries throughout by 2030 "will convince investors that it taking climate seriously," Andrew Logan, director of the oil and gas program at activist non-profit investor group Ceres, said on Twitter.

Many activists view the climate situation as a crisis, arguing that worsening storms and forest fires are proof of the need for immediate action.

During the 90-minute presentation to Wall Street analysts, executives outlined investments such as upgrades to its El Segundo, California refinery to produce renewable diesel and sustainable aviation fuel and a joint venture with agribusiness Bunge to line up feedstocks for such fuels.

The company also walked through improvements that will make upstream operations less emitting, such as the use of satellite technology to monitor for methane releases in Kazakstan and an upgrade to an offshore project in Nigeria to reinject natural gas into the reservoir instead of flaring it into the atmosphere.

But even with the additional spending, most of Chevron's capital budget will go to its conventional petroleum business. Chevron said in March it plans $14 billion to $16 billion in annual capital spending between 2021 and 2025.

"We have to be very mindful of meeting the needs of the energy system and the economy today even as we try to build a different system for the future," Wirth told reporters at a briefing. "We're trying to do both."

Wirth also defended the company's decision not to follow Royal Dutch, Total and some other companies to pledge "net-zero" emissions in its overall business by 2050, saying "we have favoured action over pledges."

In May, shareholders narrowly defeated a proposal requiring a report on a "Net Zero 2050" scenario, such as the ones discussed by the International Energy Agency.

But 61 percent of shareholders voted in favour of a proposal authored by Follow This calling on Chevron to reduce its "Scope 3" carbon emissions, which are connected to products sold by the company.

Chevron plans to update shareholders on its response to the investor votes next month when it publishes an update to its climate change report, Wirth said.

"The reason it's taking time is that it's a big complicated issue and we're not going to treat it like a simple pledge that you sign without understanding it really well," he said.

Now This' van Baal had "hoped for serious discussion of Scope 3, but we're not surprised they're not there yet," he told AFP.

A pledge to reduce Scope 3 "would mean less oil and gas. I didn't hear them say that," he added.