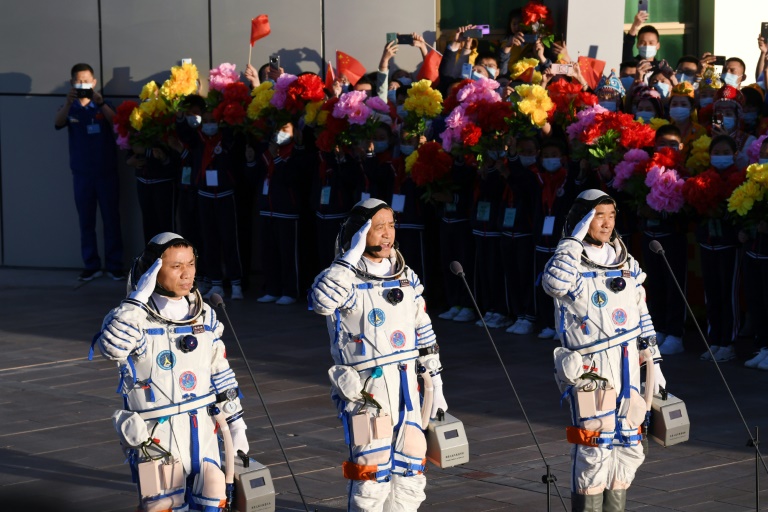 The capsule carrying the three astronauts was suspended on a parachute and landed in the Gobi desert at 1:35 pm local time (05:35 GMT).

The crew of the Shenzhou-12 spacecraft were in "good health" after the 90-day mission, a record duration for China, state broadcaster CCTV reported.

Live footage showed medical crew and support staff in a helicopter rush to a landing site in the Gobi desert. One staffer planted the Chinese national flag near the capsule.

The taikonauts -- as Chinese astronauts are known -- will undergo a 14-day quarantine before they can go home "because their immune systems may have weakened after the long mission," Huang Weifen, chief designer of China's manned space project told CCTV.

The mission was part of China's heavily promoted space programme, which has already seen the nation land a rover on Mars and send probes to the moon.

The launch of Beijing's first crewed mission in nearly five years coincided with the 100th anniversary of the ruling Communist Party on July 1, and was the highlight of a massive propaganda campaign.

The crew stayed for 90 days at the Tiangong space station, conducting spacewalks and scientific experiments.

"The successful completion of the mission... paves the way for future regular missions and utlisation of the (Chinese space) station," said Chen Lan, an independent analyst at GoTaikonauts, which specialises in China's space programme.

"It is a very important and very much needed start for the CSS."

Tiangong, meaning "heavenly palace", is expected to operate for at least 10 years.

The mission is headed by Nie Haisheng, a decorated airforce pilot in the People's Liberation Army who previously participated in two space missions.

The two other astronauts, Liu Boming and Tang Hongbo, are also in the military.

The Chinese space agency is planning a total of 11 launches before the end of next year, including three more crewed missions that will deliver two lab modules to expand the 70-tonne station.

China has poured billions of dollars into its military-led space programme in recent years as it tries to catch up with the United States and Russia.

Beijing's space ambitions have been fuelled in part by a US ban on its astronauts on the International Space Station, a collaboration between the United States, Russia, Canada, Europe and Japan.

The ISS is due for retirement after 2024, although NASA has said it could potentially remain functional beyond 2028.

"Compared to the US, China is still technically somewhat behind," Jonathan McDowell, an astronomer at the Harvard Smithsonian Center for Astrophysics, told AFP.

"The main US lead in human spaceflight is in total experience," he said.

"For example, two spacewalks is not the same as hundreds of ISS spacewalks. Quantity makes a difference."