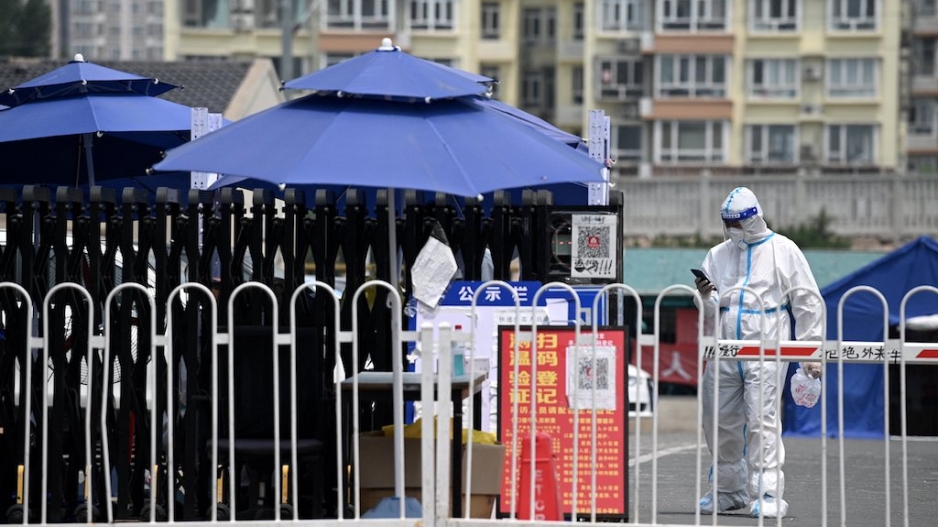 File: A security guard wearing personal protective equipment (PPE) stands at an entrance to a residential area under lockdown due to Covid-19 coronavirus restrictions in Beijing. AFP/Noel Celis

BEIJING - Businesses, schools and restaurants in Xi'an will close for one week after the Chinese city logged a handful of Covid-19 cases as outbreaks nationwide strain Beijing's zero-tolerance virus approach.

China is the last major economy wedded to a zero-Covid strategy, deploying snap lockdowns, quarantines and travel curbs in a bid to weed out new infections.

Xi'an -- a historic city of 13 million that endured a month-long lockdown at the end of last year -- has reported 18 cases since Saturday in a cluster driven by the fast-spreading Omicron variant, according to official notices.

City official Zhang Xuedong said at a Tuesday press conference that Xi'an would implement "seven-day temporary control measures" that would "allow society to quieten down as much as possible, reduce mobility... and cut the risk of cross-infection".

"We must race against both time and the virus... to guard against all possible risks and hidden dangers, and decisively avoid an explosion in community spreading," Zhang said.

Public entertainment venues including pubs, internet cafes and karaoke bars would shut their doors from midnight on Wednesday, the city government said in a notice.

Restaurants will not be allowed to serve diners indoors but may continue to offer takeaway services, it said.

Schools are to start the summer holiday early and universities will seal off their campuses.

Xi'an -- home to the Terracotta Warriors -- previously experienced one of China's longest stay-at-home orders, shutting off for a month between December and January as thousands of Covid cases were detected.

City authorities came under fire for their handling of the lockdown, which was plagued by food supply issues and medical tragedies stemming from patients being denied access to hospitals.

China logged 335 new domestic cases on Tuesday, most of which were asymptomatic, according to the National Health Commission (NHC).

The country's latest significant flare-up is in central Anhui province, where 1.7 million people in two counties were under orders to stay at home as of Tuesday.

Around 90 percent of the nearly 300 infections reported in the province on Monday were asymptomatic, according to the NHC. Over 1,000 cases have been detected during the outbreak so far.