A strong cold front is developing to the west of South Africa and will reach Cape Town and surrounds on Friday afternoon. Courtesy #DStv403

JOHANNESBURG - A strong cold front is developing to the west of South Africa and will reach Cape Town and surrounds on Friday afternoon.

Co-incidentally, Friday is also the Winter solstice, when locations to the south of the equator experience the shortest day of the year.

The cold front will be characterised by extremely strong winds that will mainly affect the Western and Northern Cape during the day.

The South African Weather Service has warned that gale force northwesterly winds will affect the Karoo areas of the Northern Cape as well as the Breede River valley and the Central Karoo in the Western Cape.

In these areas, average wind speeds are expected to reach between 65-and-74km/h and wind gusts could reach speeds as high as 100km/h. Gale force winds are also likely between Table Bay and Plettenberg Bay.

Cape Town will see rain on Friday afternoon, which will spread further inland and up the west coast towards the evening. The highest rainfall amounts are expected in the mountainous regions of the southwestern Cape.

Following the passage of the front, very cold air will stream in over the western parts of the country.

Freezing levels are expected to drop low enough on Friday night for snow on the SW Cape mountains, and light snowfalls are also likely in the vicinity of Sutherland in the Northern Cape on Saturday morning. 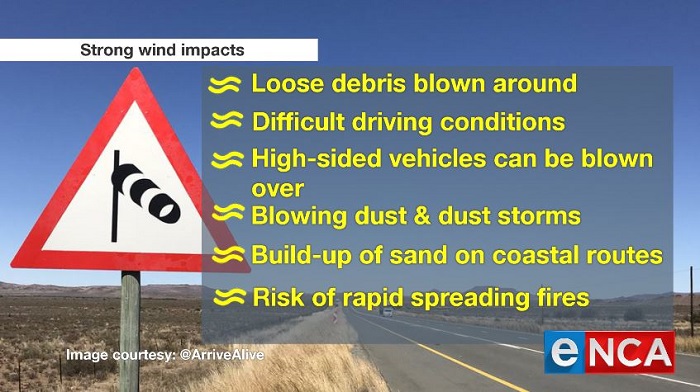 This cold front will be characterized by extremely strong winds that will mainly affect the Western and Northern Cape.