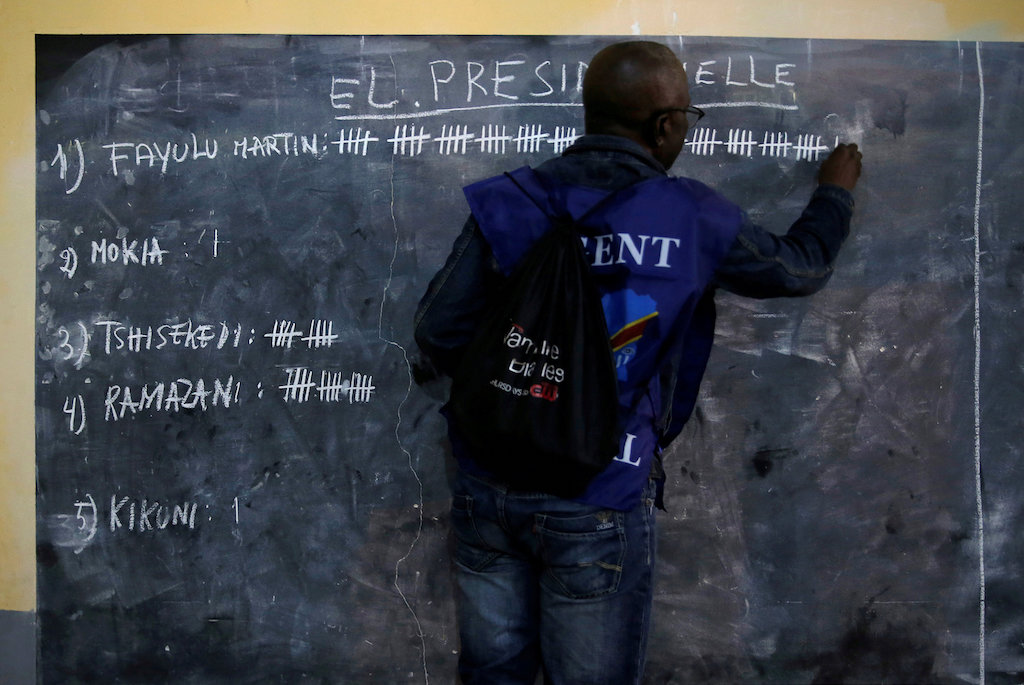 An agent of Congo's National Independent Electoral Commission (CENI) marks a vote on a blackboard during vote-counting following the elections.

KINSHASA - Democratic Republic of Congo's opposition said on Monday it expected one of its candidates to win the presidential election based on early vote tallies, but the ruling coalition said it was confident its candidate had won the chaotic contest.

The competing claims followed a disorderly election day on Sunday in which many Congolese were unable to vote due to an Ebola outbreak, conflict and logistical problems.

The vote is meant to choose a successor to outgoing President Joseph Kabila after 18 years in power and could lead to the vast central African country's first ever democratic transition.

Any disputed outcome could lead to a repeat of the violence that followed the 2006 and 2011 elections and a wider security breakdown, particularly along Congo's borders with Rwanda, Uganda and Burundi, where dozens of armed militia are active.

He said the ruling coalition candidate, Emmanuel Ramazani Shadary, who is backed by Kabila, had only about 13 percent, although a significant part of the vote remained to be tabulated.

The election is a first-past-the-post system with no run-off.

Nehemie Mwilanya, Kabila's chief of staff and a member of Shadary's campaign, told a news conference on Monday morning that he was confident Shadary had won, although he did not provide specific figures.

"For us, victory is certain," Mwilanya said.

Fayulu's camp has not yet provided specific numbers but Fayulu said late on Sunday that Shadary's camp was "dreaming" if it thought it was going to win.

The most recent opinion poll before the election, released by New York University's Congo Research Group on Friday, showed Fayulu, a former Exxon Mobil manager, leading the race on 47 percent.

Tshisekedi had 24 percent and Shadary 19 percent.

The first partial results are expected from the national electoral commission (CENI) on Tuesday.