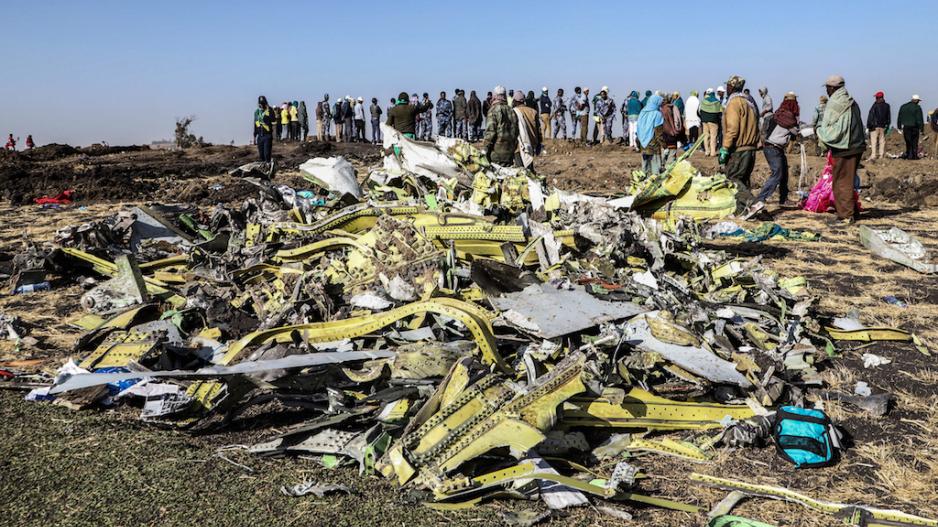 People stand near collected debris at the crash site of Ethiopia Airlines near Bishoftu, a town some 60 kilometres southeast of Addis Ababa.

The 239-page report released by congressional Democrats flagged numerous failings, including pressure in Boeing to rush the MAX out in order to compete with an Airbus plane, a "culture of concealment" in which the planemaker withheld key information from regulators and undue influence by the company on Federal Aviation Administration (FAA) higher-ups that marred oversight.

The report is the culmination of an 18-month probe by the House Transportation and Infrastructure Committee into crashes of Lion Air and Ethiopian Airlines planes that together claimed 346 lives.

"Our report lays out disturbing revelations about how Boeing -- under pressure to compete with Airbus and deliver profits for Wall Street -- escaped scrutiny from the FAA, withheld critical information from pilots and ultimately put planes into service that killed 346 innocent people," said Chairman Representative Peter DeFazio, an Oregon Democrat.

"What's particularly infuriating is how Boeing and FAA both gambled with public safety in the critical time period between the two crashes."

The report adds to the scrutiny of both Boeing and the FAA as the agency manages the process of requiring upgrades to the plane before it is cleared to fly again. The MAX has been grounded since March 2019.

Boeing said it has upgraded its processes in the wake of the crashes, setting up a new safety organization and restructuring its engineering organization to elevate concerns about safety to senior management.

"Multiple committees, experts and governmental authorities have examined issues related to the MAX, and we have incorporated many of their recommendations, as well as the results of our own internal reviews, into the 737 MAX and the overall airplane design process," Boeing said.

READ: Boeing working with regulators for return of 737 MAX

"Once the FAA and other regulators have determined the MAX can safely return to service, it will be one of the most thoroughly scrutinized aircraft in history, and we have full confidence in its safety."

An FAA spokesman said the agency "is committed to continually advancing aviation safety and looks forward to working with the Committee to implement improvements identified in its report."

The spokesman added that "the FAA continues to follow a thorough process, not a prescribed timeline, for returning the aircraft to service."