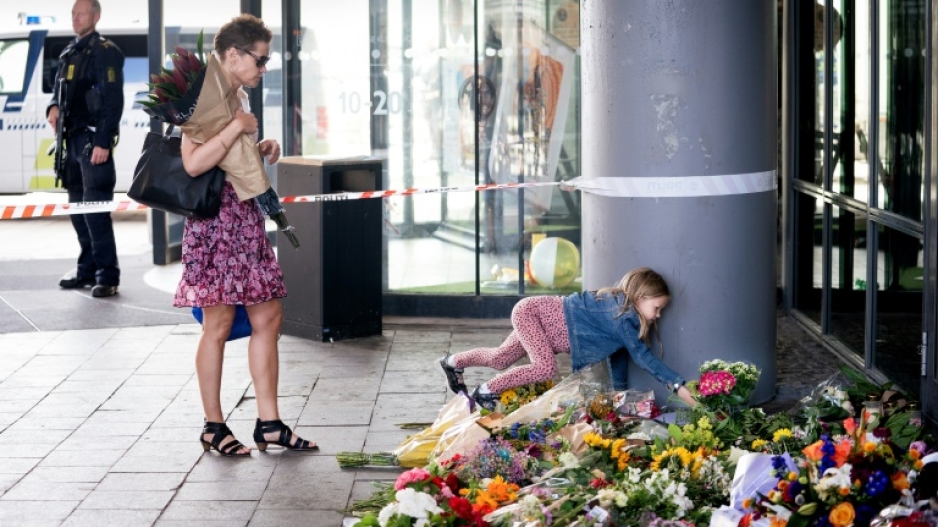 A girl places flowers at a makeshift memorial to the victims of the shooting in front of the Field's shopping centre. AFP/Ritzau Scanpix/Liselotte Sabroe

COPENHAGEN - With the city still reeling from a weekend mall shooting that left three dead, Copenhagen prepared to pay tribute to the victims with a memorial service.

Following a call from the city's mayor, a large memorial is planned for Tuesday evening in front of Fields, a shopping complex located between the city centre and the capital's airport, where the attack occurred.

The shooting shook the city which had just played hosted the opening stages of the Tour de France cycling competition and seen the return of the Roskilde music festival after cancellations for Covid-19.

Danish Prime Minister Mette Frederiksen and Mayor Sophie Andersen are due to speak at the service, which will also be attended by Crown Prince Frederik, with police expecting "a large number of people."

A choir performance will also accompany the tributes to the victims.

The Tour de France, back in France, paid tribute to the victims with a minute's applause before the start of the fourth stage on Tuesday.

The alleged perpetrator of the attack, a 22-year-old Danish man who authorities say was known to mental health services, was remanded in custody in a "closed psychiatric ward" on Monday on murder charges.

Police said they had no new information to release about the investigation.

According to public broadcaster DR, citing several unnamed sources, the suspected gunman had tried to reach a psychological help line shortly before the attack, but authorities would not confirm this.

According to a former neighbour interviewed by newspaper Berlingske, the suspect was a troubled person from childhood.

The neighbour, who had asked to remain anonymous, told the paper that in school the suspect had troubles coping with the stress of too many people around him.

The 22-year-old is suspected of three murders, with those killed being a 46-year-old Russian man residing in Denmark, a 17-year-old girl and a young man of the same age, both Danish.

One of them worked in the cinema in the shopping centre, their employer said.

The suspect is also facing seven counts of attempted murder.

Four of those shot were seriously injured but in stable condition and according to authorities, they are two Danish women aged 19 and 40, a 50-year-old Swedish man and a 19-year-old Swedish woman.

Three others sustained light injuries from the gunfire: two Danish women aged 15 and 17 and a 45-year-old Afghan man living in the Scandinavian country.

About 20 more people sustained light injuries in the panicked evacuation after the shooting.

The Fields shopping centre has been closed since the attack and is expected to reopen on July 11.