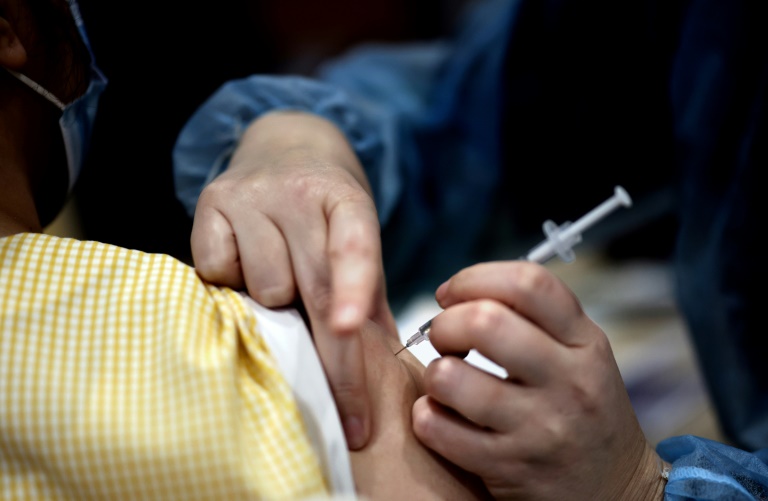 File: Senior citizens are being encouraged to register for the COVID-19 vaccine. AFP/Thomas Coex

PARIS - Health officials have rolled out more than 500 million coronavirus vaccine doses around the world, according to an AFP tally on Friday, as European rows over hoarding and supply issues escalated dramatically.

Despite the huge effort to get jabs into arms, the pandemic is still surging in Europe and Latin America -- where Brazil has now passed 300,000 deaths and Mexico 200,000.

And the rollout of vaccines is chronically unequal, with the United States accounting for more than a quarter of the global total and poorer nations lagging far behind richer ones.

EU countries are also still struggling to get their inoculation drives off the ground, prompting angry outbursts from the top of French officialdom.

Following an EU summit, French President Emmanuel Macron said there was a "new type of world war", adding: "We are looking in particular at Russian and Chinese attacks and attempts to gain influence through the vaccine."

His foreign minister, Jean-Yves Le Drian, later chimed in to accuse Britain of "blackmail" in its vaccine dealings with the EU.

However, Moscow -- whose Sputnik V shot is being rolled out in numerous countries across the world -- quickly rebuffed Macron's outburst, Kremlin officials saying they "absolutely disagree".

And in a sign of Europe's deepening divisions, Germany said it would be happy to use Sputnik V if it gets approval from EU regulators.

Germany also said it has classified France as a high-risk zone, which means travellers need to show a negative Covid test and quarantine upon arrival.

With more than 2.7 million people dead from a virus that first emerged in China in late 2019, leaders everywhere are under pressure to get jabs into arms.

An AFP tally of global vaccinations showed more than 508 million had been administered by Friday, with 133 million in the US and 91 million in India.

But infections continue to rise at a worrying rate, with more than half a million cases recorded worldwide in just the last week, according to AFP data.

Vaccines cannot come quickly enough to Brazil, which is suffering unsparingly from an outbreak that has now killed more than 300,000 from 12 million infections.

The political heat was turned up on President Jair Bolsonaro on Friday when his predecessor accused him of presiding over the "biggest genocide" in the country's history.

"We must save Brazil from Covid-19," said former leader Luiz Inacio Lula da Silva, adding: "Brazil will not withstand it if this man continues to govern in this way."

Further north, Mexico is also suffering a brutal third wave, with only a tiny proportion of the population vaccinated so far.

Adriana Meneses remembers vividly when her husband Carlos Hernandez became the country's first victim of an illness that was unknown and apparently untreatable, almost exactly one year ago.

"We were harassed by the neighbours and on social networks. They threatened to burn down our house," she said.

"Today, unfortunately, we are part of the statistics."

The virus has governments in all parts of the world to impose drastic restrictions -- from curfews and lockdowns, to school closures and travel bans.

Much of Europe is living under a regime that restricts travel and economic activity, and Kenya became the latest African country to order a partial lockdown on Friday, shutting schools and bars in and around the capital Nairobi.

"I am convinced that the cost of not acting now would be far greater," said President Uhuru Kenyatta.

From religious festivals to sporting events, dates in the calendar that were previously regarded as untouchable have succumbed to virus restrictions around the world.

Indonesia said it was banning people from travelling for a festival known as Mudik at the end of Ramadan, when millions journey often long distances to be with their families.

Such restrictions have brought economic pain to much of the world and forced governments to pass massive stimulus packages, with German lawmakers on Friday giving their backing to an EU-wide plan worth 750 billion euros ($885 billion).

Any European recovery will depend on the initiative of many millions of small businesses around the continent.

In France, monks at a 900-year-old abbey think they have solved an age-old dilemma of how to dispose of unwanted stock.

Restaurant closures have left them with a glut of the artisanal cheese that they have produced for almost a century, and they have turned to the internet to offload it -- aiming to sell a tonne of cheese by Tuesday.

"We tried explaining to our 75 cows that they needed to produce less milk but they don't seem to have understood," brother Jean-Claude of the Citeaux abbey in eastern France.