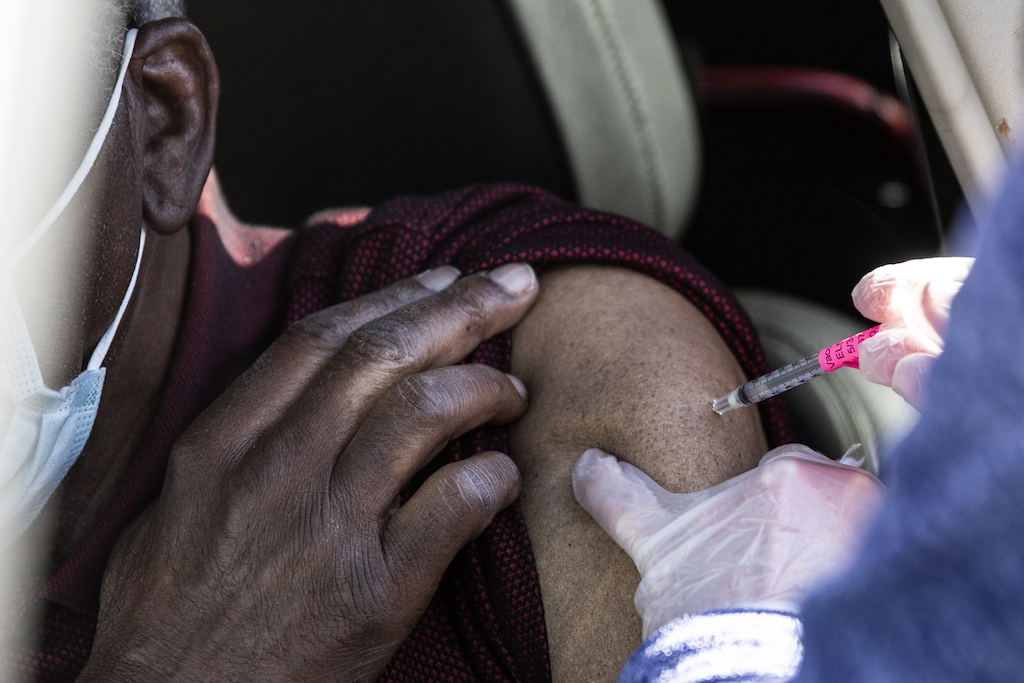 A man gets his first dose of the Covid-19 vaccine administered during mass vaccinations at Coors Field baseball stadium on January 30, 2021, in Denver, Colorado.

WHO in Wuhan: hospital and exhibition

A team of WHO experts investigating the origins of the coronavirus toured a propaganda exhibition celebrating China's recovery from the pandemic in Wuhan after a meeting at the hospital that treated the first confirmed Covid-19 cases over a year ago.

Details of the trip have been scant so far, with the media kept at arm's length.

France is to close its borders Sunday to non-European Union countries for all except essential travel, while stepping back from a widely anticipated third lockdown.

Large shopping centres - excluding those where food is sold - are to be closed and enforcement of a 6pm curfew is to be stepped up.

Germany has banned most travellers from countries hit by new, more contagious coronavirus variants to prevent a surge in infection numbers.

The move, set to last until February 17, affects people coming from Brazil, Britain, Ireland, Portugal, and South Africa, as well as the southern African kingdoms of Lesotho and Eswatini.

The Norwegian government announced that several semi-confinement measures affecting Oslo and the surrounding area would be lifted.

The measures were enacted a week ago following the detection of several cases of the British variant of Covid-19.

The Vatican Museums, including the Sistine Chapel, are to reopen Monday after being closed for 88 days owing to coronavirus restrictions -- the longest closure since World War II.

Vaccinations in Algeria, Egypt and Iran

It is to receive Sunday its first doses of the vaccine developed by Anglo-Swedish pharmaceutical giant AstraZeneca and Oxford University.

Egypt said its first doses of the AstraZeneca vaccine would arrive on Sunday as well.

It began its vaccination programme with the vaccine developed by the Chinese group Sinopharm.

Iran's supreme leader Ayatollah Ali Khamenei earlier this month banned the use of vaccines made by the United States and Britain, calling them "completely untrustworthy".

US: Masks mandatory on public transport

The US Centers for Disease Control and Prevention now require masks on virtually every form of public transportation throughout the country.

More than 2.2 million people have died of coronavirus since the outbreak emerged in China in December 2019, according to an AFP tally from official sources.

More than 102 million have been registered.

The number of deaths globally is underestimated. The toll is calculated from daily figures published by national health authorities and does not include later revisions by statistics agencies.