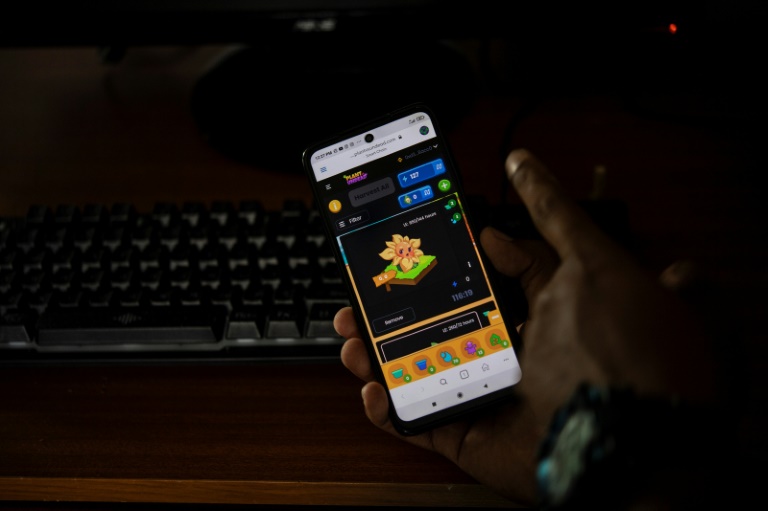 A man tends to his cyber garden on his mobile phone. AFP/Yuri Cortez

CARACAS - Venezuelans have turned to NFT gaming to augment their income as the country confronts its eighth year of recession and fourth of hyperinflation.

NFTs are one-of-a-kind digital collectables, each with a certificate of authenticity created by the same blockchain technology that underlies cryptocurrency. It cannot be forged or otherwise manipulated.

Each plant is an NFT that can be sold for real-world money.

Plants vs Undead is currently the 18th most-visited website in Venezuela, according to Amazon's Alexa index.

In 35th place is Axie Infinity, another NFT game that works on a similar principle but requires a higher initial investment of about $1,000.

"These gaming platforms in which participants can earn money have become, in hyperinflationary countries such as Venezuela, options for generating additional income... (by) playing for an hour, three, four a day," said Venezuelan economist Aaron Olmos.

In this alternative economy, NFTs tend to start off at a relatively affordable price that grows at an attractive rate as more and more people get involved, he said, but warned the price can also drop and investments be lost.

One form of gaming that has gained in popularity is an investor paying someone else, often a teenager, to play on their behalf, generating income for a fee.

Axie Infinity, for example, can yield $400 or $500 a month for the hired player, enough "to support a family," said Yerson Rivero, a crypto-investor and NFT gamer.

In Venezuela, the minimum wage for public service is $2.5 per month and the average salary about $50, while a basket of basic groceries for a family of five costs about $220.