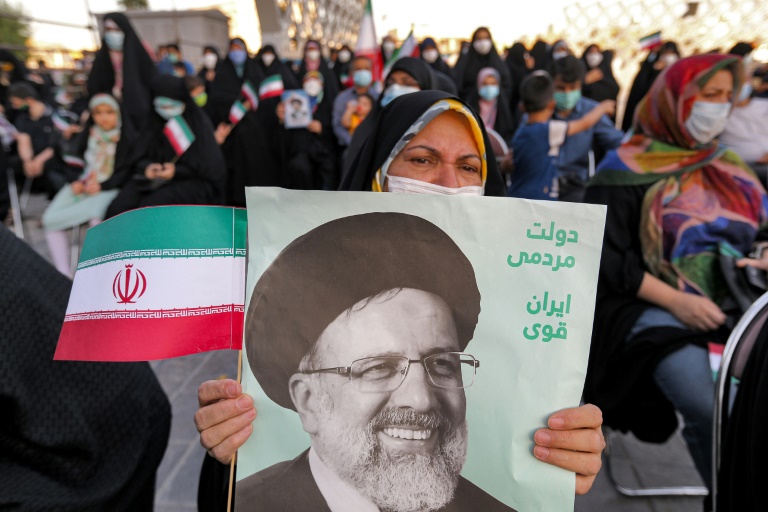 A woman holds a poster of Iran's newly-elected president Ebrahim Raisi, with text in Persian reading "government of the people, strong Iran", as supporters celebrate his victory in Imam Hussein square in the capital Tehran on June 19, 2021

"The Dawn of a New Era," read the jubilant front-page headline of the conservative Resalat daily, welcoming the 62 percent win by Raisi, the head of Iran's judiciary, in Friday's election.

An austere and pious figure from the Shiite Muslim clerical establishment, Raisi is seen as close to the 81-year-old supreme leader, Ayatollah Ali Khamenei, who holds ultimate political power in Iran.

Raisi will take over from moderate President Hassan Rouhani as Iran seeks to salvage its tattered nuclear deal with major powers and free itself from punishing US sanctions that have driven a deep economic crisis.

Resalat predicted a welcome change from the Rouhani administration which it said has been dogged by political infighting and occupied with "fruitless domestic and foreign challenges".

The moderate Jomhouri-e Eslami daily meanwhile highlighted that the conservatives had now cemented power across the state, also including parliament, the courts, the powerful Guardian Council and the armed forces.

Using a touch of irony in its editorial, the newspaper said that "we, the people of Iran, owed the conservative faction a homogeneous government" and "the people have delivered".

Raisi's victory had been widely anticipated after many political heavyweights were barred from running by the candidate-vetting Guardian Council.

Turnout plunged to 48.8 percent, a record low for a presidential poll in the Islamic republic.

The Kayhan daily, which has been highly critical of Rouhani, argued however that turnout was "epic" considering the economic woes and the "enemy's propaganda", referring to boycott calls from opposition groups abroad.

A full-page picture of a smiling Raisi was also published on the front page of the ultraconservative Javan daily, which hailed an election "with no losers".

It called the level of voter participation "acceptable and logical" given the "discontent over the economy and the coronavirus" pandemic, which has hit Iran hard.

Reformist newspaper Arman-e Melli meanwhile called on Raisi to "create trust for the 70 percent" who voted against him, abstained or spoiled their ballots, and urged him to prioritise foreign policy and the lifting of US sanctions.

Rouhani's landmark achievement during his eight years in office was the 2015 deal with world powers under which Iran agreed to limit its nuclear programme in return for sanctions relief.

That deal has been hanging by a thread since then US president Donald Trump withdrew from it in 2018 and launched a "maximum pressure" sanctions campaign against Iran.

The reformist Shargh daily, meanwhile, reflected on the poor performance of the only candidate from its political camp, former central bank chief Abdolnasser Hemmati, who scored just 8.4 percent.

It also argued that the leading figures of the reformists, who support social reforms and closer ties with the West, had neglected their voter base and called on them to "return to the people".