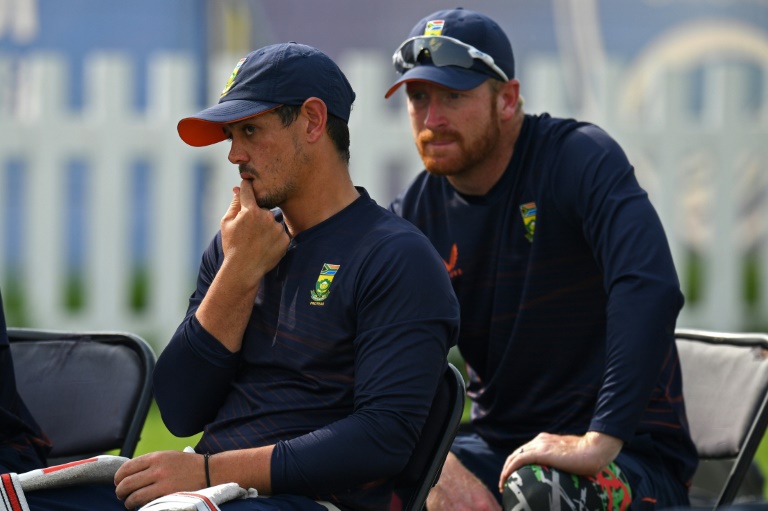 DUBAI - Quinton de Kock withdrew from South Africa's Twenty20 World Cup match against the West Indies on Tuesday after refusing to take the knee, a decision which highlighted once again cricket's struggles to emerge from its troubled past in the country.

The 28-year-old's shock decision came just hours after Cricket South Africa (CSA) had ordered all players at the tournament to take part in the anti-racism gesture.

"CSA has noted the personal decision by South African wicketkeeper Quinton de Kock not to take the knee ahead of Tuesday's game against the West Indies," said a CSA statement.

"The Board will await a further report from team management before deciding on the next steps. All players are expected to follow this directive for the remaining games of the World Cup."

After South Africa had won the match by eight wickets, Bavuma admitted there will now be question marks over De Kock's future in the team.

Earlier, the CSA said "concerns were raised that the different postures taken by team members in support of the BLM (Black Lives Matter) initiative created an unintended perception of disparity or lack of support for the initiative".

They acted after pictures emerged from the team's first game against Australia at the weekend where some players knelt and some stood.

De Kock stood with his arms behind his back. He also refused to take a knee in South Africa's Test series in the West Indies earlier this year.

"My reason? I'll keep it to myself. It's my own, personal opinion," he said at the time.

"It's everyone's decision. No-one's forced to do anything, not in life. That's the way I see things."

The South Africans playing in Tuesday's game took the knee before the start of the game. Their next World Cup match is in Sharjah on Saturday against Sri Lanka. 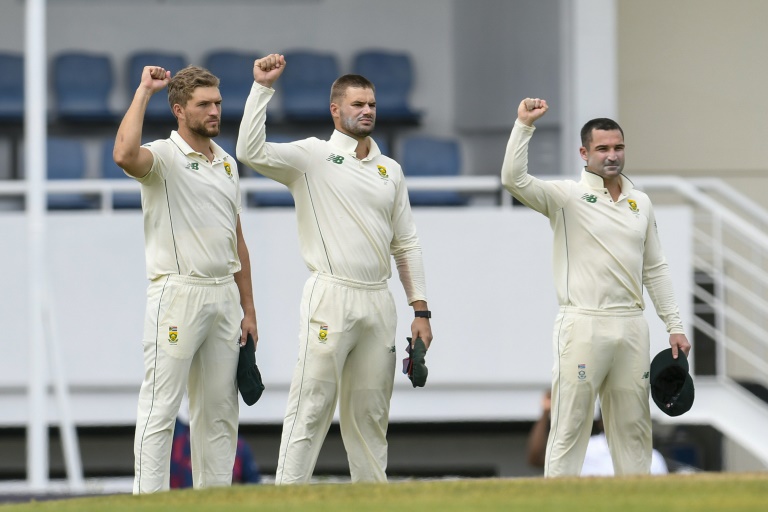 Standing not kneeling: South Africa's Wiaan Mulder, Aiden Markram and Dean Elgar raise their fists before the first Test against the West Indies in St Lucia in June

He has made over 10,000 international runs and was briefly captain of the Test side before stepping down earlier this year.

"Surely it's down to the individual to decide whether he or she wants to be involved in any movement," Vaughan tweeted.

"A cricket board should request players to do it but if that individual decides they don't want too, it should not stop them playing the game of cricket."

West Indies captain Kieron Pollard said: "Once you're educated and you understand, we will understand you doing it, but we don't want anyone doing it for us in solitude or to feel sorry for us."

Fellow West Indian Carlos Brathwaite, who hit the winning runs in the T20 World Cup final in 2016, said he didn't agree that players should be forced to take a knee.

However, he added: "I also understand where Cricket South Africa is coming from, this is a watershed moment for the Black Lives Matter movement."

When South Africa played the West Indies in St Lucia in June, only six of the 11 players in the starting line-up took a knee.

Others, including captain Dean Elgar, stood with right fists raised. De Kock stood with his hands behind his back.

However, black fast bowler Lungi Ngidi, who played in that game and is in the squad in the UAE, insisted the team remained united.

"It's not fair for me to speak for other people, everyone's entitled to their own choices in life. I've been very clear on my stance," he said.

"In terms of the team, there is no division at all. We play for South Africa which is all we are trying to do as players."

Nkwe's resignation came against a backdrop of widespread criticism of Boucher following revelations made at hearings into racism in South African cricket.

Boucher later apologised for "any offensive conduct, real or perceived".