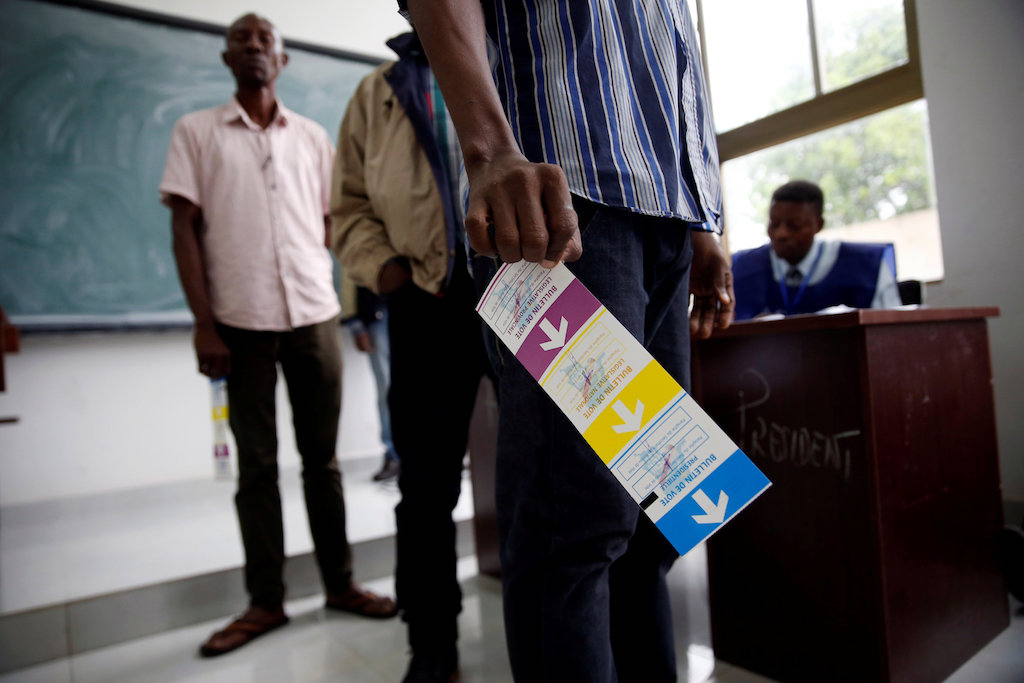 Men wait in line to cast their vote at a polling station in Kinshasa, Democratic Republic of Congo.

KINSHASA - Voting in Democratic Republic of Congo's long-anticipated presidential election got off to a shaky start on Sunday due to torrential rain in the capital, long delays at some polling stations and broken-down machines.

President Joseph Kabila voted early in the morning in the capital Kinshasa at the same school as the candidate he is backing, former interior minister Emmanuel Ramazani Shadary, whom the latest opinion polls showed trailing two opposition candidates.

"My only concern is that we have this very heavy rain and probably voter turnout might be low, but hopefully the skies will clear, and the voters will turn out in numbers," Kabila, wearing a dark blue suit, told reporters.

In the eastern city of Goma, where the weather was clear, a Reuters witness saw residents casting their votes, but another polling station in the city was still closed 90 minutes after polls opened at 6am.

"The majority of voters here are stressed," said Kayembe Mvita Dido, first in a line of dozens waiting at a polling station in the shadows of the towering Nyiragongo volcano.

"Some do not even know how to use the voting machine," he said, referring to a new electronic voting system, criticised by the opposition as vulnerable to fraud.

Several machines broke down Kinshasa, Goma and Bukavu, bringing voting in those polling stations to a halt, witnesses said. Some voters complained they could not find their names on the rolls.

Streets in Kinshasa were also flooded due to a violent storm that appeared to have knocked out the power in two polling stations visited by Reuters, although that should not affect the machines whose batteries are meant to be charged ahead of time.

The national electoral commission (CENI) has tried to reassure the opposition about the voting machines by saying that only print-outs from the machines counted by hand will be factored into the official results.

But any disputed outcome could lead to a wider security breakdown across Congo, particularly along its eastern borders with Rwanda, Uganda and Burundi, where dozens of armed militia are active.

The last polls close at 5pm, although voting will continue for those still in line. Voters are also choosing representatives for the national and provincial assemblies.