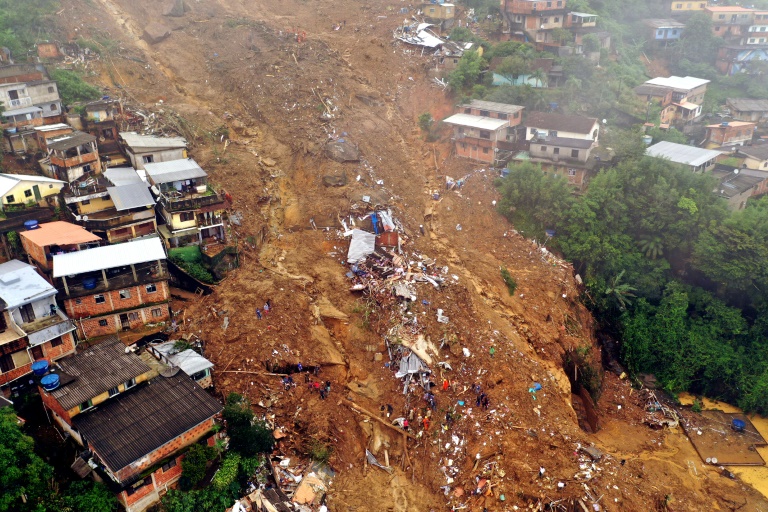 An areial view of the flood damage in Petropolis, Brazil is seen February 16, 2022

PETROPOLIS - Holding the few possessions they are able to carry, families stream down the slopes of the hillside neighborhood of Alto da Serra, many in tears, fleeing the devastation left by deadly landslides in the Brazilian city of Petropolis.

Their modest neighborhood was one of the hardest hit by Tuesday's storms, which dumped a month's worth of rain on this scenic tourist town in a matter of hours, triggering flash floods and torrents of mud that gushed violently through the city.

"It's devastating. We never could have imagined something like this," says one fleeing resident, Elisabeth Lourenco, clutching two bags in which she stuffed some clothing when emergency officials ordered everyone in the neighborhood to evacuate.

"When the rain was falling hardest, a huge amount of mud came pouring down the hillside, and some tree branches fell on my house," says the 32-year-old manicurist, on the verge of tears.

Nearby is a scene of total chaos. A giant swathe of hillside is covered in mud and strewn with the remains of shattered houses. 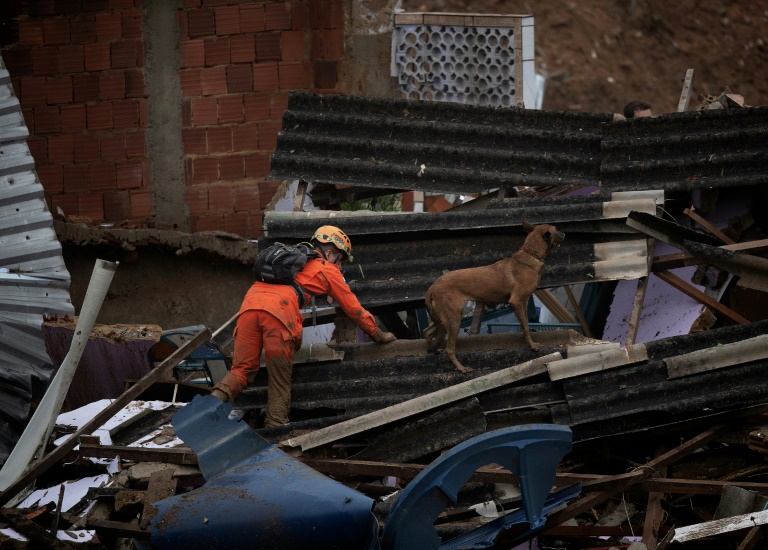 Rescue crews search for survivors in the rubble left by landslides and flooding caused by torrential rains in Petropolis, Brazil Febrary 16, 2022

Authorities say the disaster killed at least 50 people across the city. There are fears the death toll could rise further as rescue workers continue digging through the mud and ruins.

Watching the rescue operation in disbelief, residents shudder with each deafening pass of the helicopters hovering overhead.

"I was eating dinner when the storm started. My brother came in and said, 'We need to get out of here, the hillside is collapsing,'" says Jeronimo Leonardo, 47, whose home sits at the edge of the area wiped out by the landslide.

Residents of Alto da Serra have been evacuated to a church that sits atop another hill nearby.

A man looks out over the flood zone in Petropolis, Brazil, February 16, 2022

From the square outside the small blue building, they can see the disaster zone through the mist.

Dozens of families swarm the church, carting their belongings in bags.

Outside, volunteers unload a truck of bottled water, as others sort through donated clothing.

"Can I have some shoes?" asks a little boy standing barefoot, his clothes stained with mud.

Inside, mattresses line the floor.

"We started taking people in as soon as the tragedy started Tuesday evening. We're hosting around 150 to 200 people, including a lot of children," says Father Celestino, a parish priest.

Yasmin Kennia Narciso, a 26-year-old teacher's assistant, is sitting on a mattress nursing her nine-month-old baby. 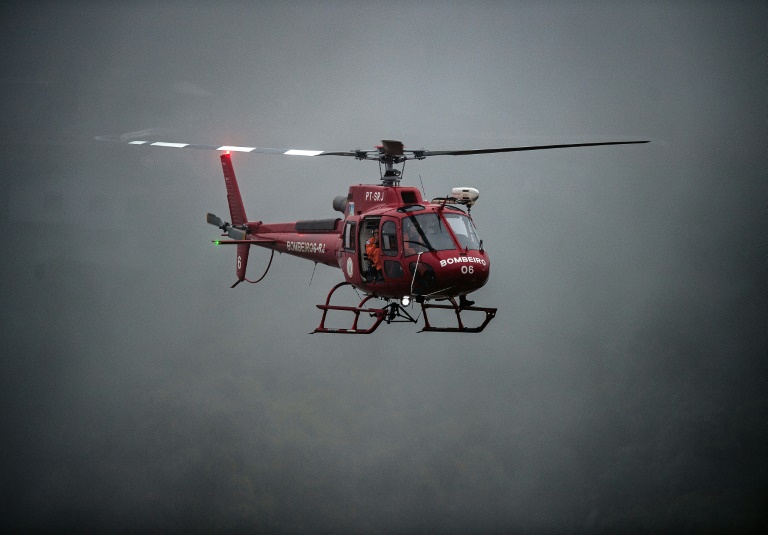 "I didn't sleep all night," she says.

She tells the story of how she fled with her two daughters around 11:00 pm.

"We tried to leave earlier, but there were boulders strewn across the path and everything was flooded. We were in water up to our waists. We had no choice but to wait until it went down," she says.

She adds that she is still waiting for news on several neighbours.

"An older lady and her three grandchildren who lived just above us were buried in the mud."

Survivors know they likely face a long wait to learn if and when they can return home -- for those who still have homes left.