Djokovic 'not sure' about US Open fitness after Olympics nightmare 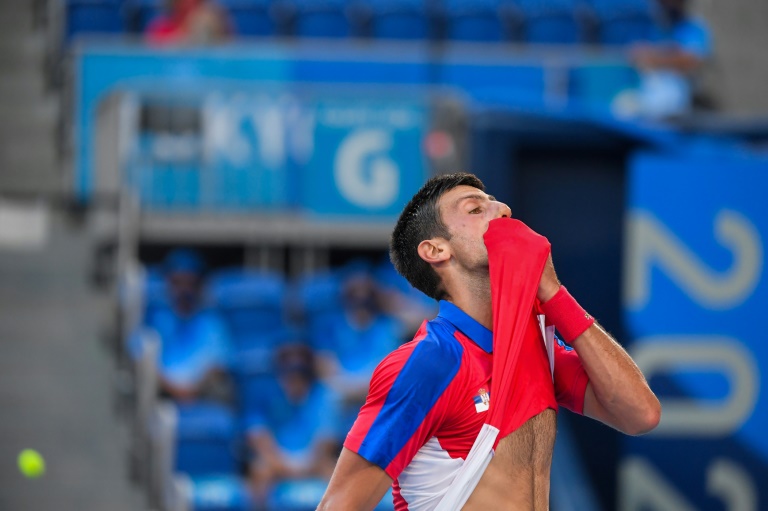 Novak Djokovic will leave the Tokyo Olympics without a medal

TOKYO- World number one Novak Djokovic said he was "not sure" about his fitness for the US Open after pulling out of the Tokyo Olympics mixed doubles bronze medal match with a shoulder injury on Saturday.

The 34-year-old Serb could become the first man to complete a calendar Grand Slam since Rod Laver in 1969 when the US Open gets under way on August 30.

The withdrawal in Tokyo came after the 20-time major champion lost his cool on his way to a surprise 6-4, 6-7 (6/8), 6-3 defeat against Pablo Carreno Busta in the Olympics singles bronze-medal match.

He admitted that his exertions in Japan have taken their toll but he still hopes to be fit enough to challenge at Flushing Meadows.

"The consequences physically hopefully will not create a problem for me for the US Open, but that's something that I'm not sure about right now," said Djokovic.

"But I'm not regretting for giving it all because at the end of the day, when you play for your country, that's necessary."

The International Tennis Federation said Djokovic had withdrawn with a "left shoulder injury".

"Ashleigh Barty and John Peers receive a walkover against Djokovic and Nina Stojanovic and win the bronze medal for Australia," the ITF added.

Djokovic had been eyeing two gold medals when he played the singles and mixed doubles semi-finals on Friday -- but less than 24 hours after his hopes for gold were ended -- he was preparing to leave the Ariake Tennis Park without a medal of any colour.

He lost a gruelling match to Carreno Busta which lasted two hours and 47 minutes in suffocating heat, despite saving five match points.

The Serbian sporting icon's best result at the Olympics remains his bronze medal in Beijing in 2008.

"The level of tennis dropped, also due to exhaustion, mentally and physically."

His next opportunity to win an Olympic title will come in Paris in three years' time, when he will be 37.

"I know that I will bounce back. I will try to keep going for Paris Olympic Games and fight for my country to win medals," insisted Djokovic.

"I'm sorry that I disappointed a lot of sports fans in my country. But that's sport, I gave it all, whatever I had left in the tank, which was not so much. I left it out on the court." 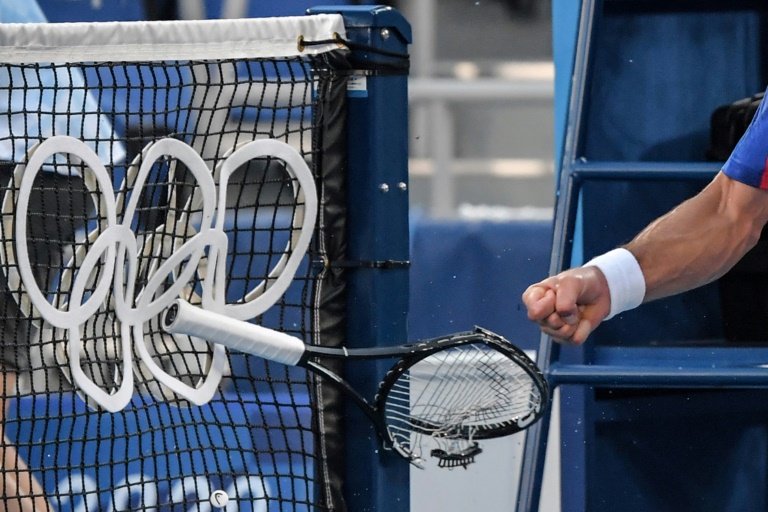 Novak Djokovic smashed a racquet against the net post

On Saturday, Djokovic brought back memories of his infamous default against Carreno Busta last year at the US Open, when he inadvertently struck a ball at a line judge.

This time he threw his racquet high into the empty stands as he saw a break point come and go in the opening game of the third set, and continued to cut an angry figure, destroying another racquet by smashing it against the net post.

He was given a warning by the umpire after that second incident, but not following the first.

"It was an emotional outburst and it happens," said Djokovic. "You're tense on the court, in the heat of the battle.

"It's not the first time and it's not the last time probably. It's not nice, of course, but it's part of, I guess, who I am.

"I don't like doing these things, I'm sorry for sending this kind of message, but we're all human beings and sometimes it's beyond his control.