KINSHASA - A second wave of the Ebola virus has been confirmed in eastern Democratic Republic of Congo, where an initial outbreak has already killed 125 people, a minister said on Saturday.

The latest wave is centred in Beni, a town in North Kivu near the border with Uganda, said Health Minister Dr Oly Ilunga.

"We don't yet know the scale of it," he added. "The epicentre, which was in Mangina is now in Beni." The two towns lie about 20 kilometres apart.

This second wave occurred as a result of community resistance to measures taken to tackle the disease, Ilunga said.

"The epidemic in Beni is high risk.. and the situation is worrying."

On Friday, the World Health Organization expressed concern over the growing number of cases in recent weeks, especially in Beni.

The latest outbreak is the 10th in DR Congo since Ebola was first detected there in 1976.

Officials in Beni have announced measures to protect health workers after a number of incidents where response teams were assaulted.

Fears and misconceptions about the virus have led to widespread mistrust and resistance to Ebola response workers, including those who come into communities wearing hazmat suits to orchestrate burials.

A staff member of the UN peacekeeper mission MONUSCO was among the latest victims of the virus, the UN and health ministry said.

The work of health officials is also hampered by violence in a region which has long been ravaged by armed conflict.

END_OF_DOCUMENT_TOKEN_TO_BE_REPLACED 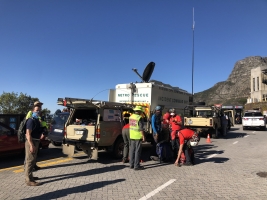