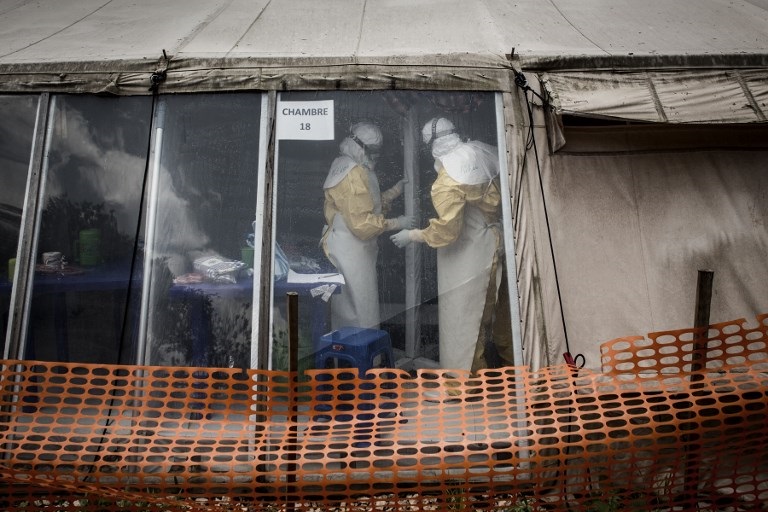 Health workers are seen inside the 'red zone' of an Ebola treatment centre, which was attacked in the early hours of the morning on March 9, 2019 in Butembo.

DR CONGO - Some 100 people have died in the Ebola epidemic in DR Congo over the past three weeks, taking the overall death toll in the latest outbreak past 700, according to health ministry data.

Local people are now at least receiving vaccines on a large scale for the first time with more than 95,000 getting a dose of the rVSV-Zebov vaccine from Merck laboratories.

The health ministry said this had enabled thousands of lives to be saved.

The Democratic Republic of Congo declared its tenth outbreak of Ebola in 40 years last August in northeastern North Kivu province before it spread into the neighbouring Ituri region.

The current outbreak is the second worst to date, the deadliest being a 2014 epidemic in West Africa which killed more than 10,000 people in Guinea, Liberia and Sierra Leone.

The ministry added late Friday that another 295 suspected cases were being examined.

The World Health Organization has warned that "the risk of national and regional spread remains very high" and said dealing with the epidemic could take another six months.

Poor security owing to the presence of several armed groups, coupled with resistance of some communities to seeking treatment, has hampered the fight to stem the spread of the disease.

A recent study in the central Congolese cities of Beni and Butembo found only a third trusted local authorities to help them and more than a quarter believed Ebola does not exist.