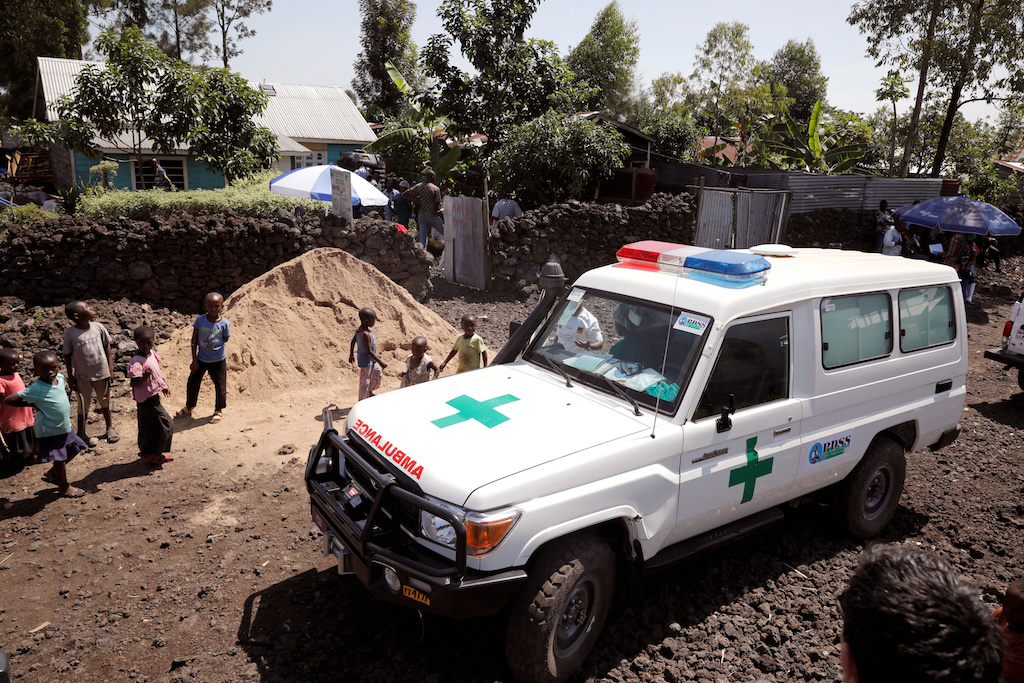 An ambulance waits next to a health clinic to transport a suspected Ebola patient, in Goma in the Democratic Republic of Congo, 5 August 2019.

DAKAR - Ebola's spread to a new part of Democratic Republic of Congo is a disturbing sign that health workers are failing to keep track of high-risk people on the move, aid agencies said on Friday.

A woman and her child were confirmed to be the first two Ebola cases in Congo's South Kivu province this week, after travelling more than 700 kilometres south from where they likely caught the disease, according to officials.

The outbreak had previously been contained to North Kivu and Ituri provinces, with a few cases in neighbouring Uganda.

The 24-year-old woman had been identified as a high-risk contact of an Ebola patient in the city of Beni last month, but travelled with her children by bus, boat and road for hundreds of miles before she died on Tuesday night.

"This highlights a disturbing trend of cases originating from current hotspots which then leave the area and, despite the control measures in place along the corridor, are not detected," said Whitney Elmer, country director for charity Mercy Corps.

"It is very concerning, especially given the efforts over the last few months to scale up the response," she told the Thomson Reuters Foundation.

Ebola causes vomiting, bleeding and diarrhoea and spreads via contact with bodily fluids of the infected.

A breakthrough this week showed there may be a cure as two experimental drugs were found to boost survival rates.

But stopping the outbreak still depends on tracing and monitoring people who might have been exposed to the disease to prevent is spreading further, health workers said.

"This is very indicative of one of the challenges we face, which is that people are so mobile," said Margaret Harris, a spokeswoman for the World Health Organization (WHO).

WHO deployed a rapid-response team and plans to vaccinate everyone in the village where the woman died, Harris said.

The response has been hampered by militia violence causing people to flee and by mistrust of health workers, which has driven patients to hide symptoms and avoid detection.

"This is a stark reminder that we are still far from containing and ending Ebola in DR Congo," LeSueur said.