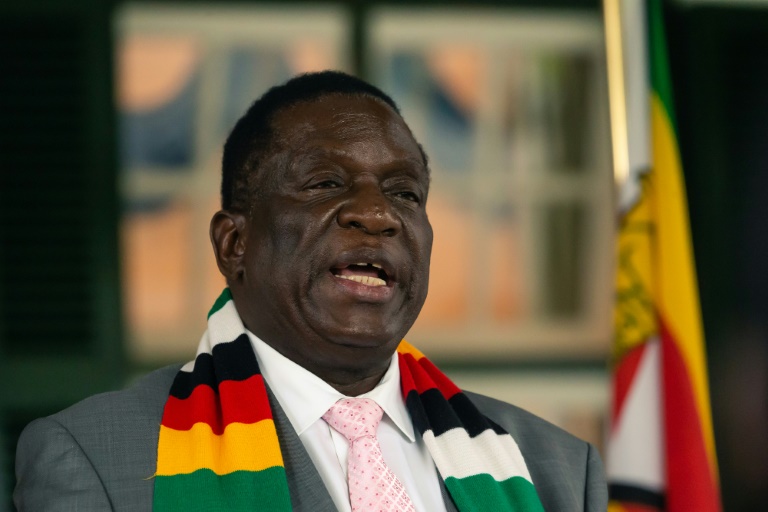 Emmerson Mnangagwa promised change when he took over from Mugabe, but critics say he simply uses more subtle methods to block the opposition. AFP/Jekesai Njikizana

HARARE - In office since the military-led ouster of Robert Mugabe three-and-a-half years ago, Zimbabwe's President Emmerson Mnangagwa is consolidating his grip on power with moves reminiscent of his predecessor's style, analysts say.

Tweaks to the constitution and criminalising anti-government speech mark a change from Mugabe's street-fighting and abductions, but observers see the same motives at work -- making political opposition all but impossible.

The president -- who arrived in office promising a "new and unfolding democracy" and a departure from Mugabe's authoritarian rule -- is in fact developing "an imperial executive whose power is not adequately checked and balanced," said Kucaca Phulu, legal affairs chief of the opposition Movement for Democratic Change (MDC).

Mnangagwa claimed the presidency in November 2017 after a military coup put paid to Mugabe's 37-year rule.

He was confirmed in elections eight months later the results of which were hotly contested by the opposition, and will be up for re-election in 2023.

Weeks ago, a constitutional amendment granted the president power to handpick judges and extend the tenure of senior members of the judiciary, even past their retirement age.

The constitutional change "is manifestly conspicuous in its intention to consolidate and solidify the president's position ahead of 2023 elections," the Zimbabwe Human Rights NGO Forum said in a statement.

Mnangagwa almost immediately extended by five years the tenure of 70-year-old Chief Justice Luke Malaba -- seen as the president's ally after he threw out opposition claims of election-rigging in 2018.

Earlier this month, Zimbabwe's High Court ruled that Malaba's extension was illegal after a challenge by a lawyers' association, but the government vowed to appeal.

Justice Minister Ziyambi Ziyambi threatened to "poke the enemy in the eye", claiming the courts had been captured by foreign forces.

Even with the High Court ruling, the change to the basic law marks "the single deadliest blow to constitutionalism", said Dzikamai Bere, director of the Zimbabwe Human Rights Association.

Critics see little difference between Mnangagwa -- Mugabe's former deputy -- and his ex-boss, accusing him of seeking to create a one-party state under the ruling Zanu-PF.

"Whereas in the past Zanu-PF used violence and abductions to intimidate and cow its opponents in order to maintain its hold on power, this time they have decided to use subtle ways."

The government now hopes to pass a so-called Patriotic Bill, which prohibits any Zimbabwean from "wilfully communicating messages intended to harm the image and reputation of the country on international platforms".

Seen as seeking to muzzle Mnangagwa's opponents, it will allow the government to pry into private communications between citizens and foreign government officials if passed into law.

Combined with the constitutional amendment, the bill shows "it's all about consolidation of power and a game plan in favour of Mnangagwa," Rusero said.

"We are on a roller-coaster of rule by law as opposed to the rule of law... the path has been cleared and come 2023 (elections) it's as good as a done deal," he added.

The two "are really designed to consolidate and concentrate power in the hands of the president. They are driven by authoritarian impulses," he said.

"The whole thing is a big mess," said Masunungure. "Patriotism is not something you can legislate for. All this is aimed at muzzling government critics."