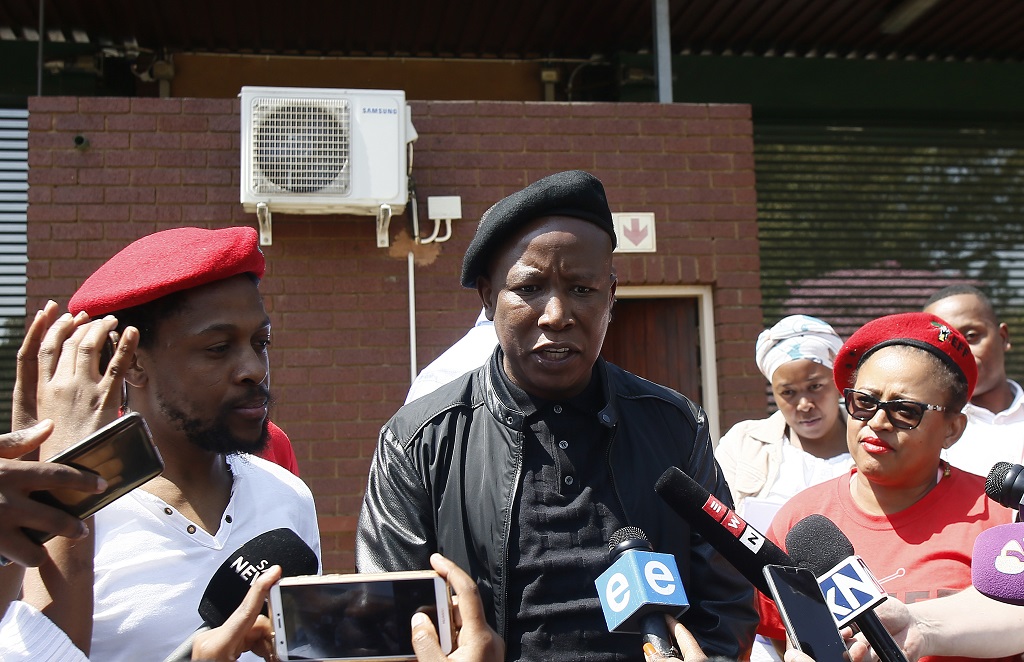 EFF leader Julius Malema addresses media at the Hawks offices in Silverton, Pretoria, on Tuesday, 10 September 2019. Malema met with investigators over a case in which he allegedly unlawfully discharged a firearm during a political rally in the Eastern Cape last year.

Editor's note: Offensive language is contained in this article.

Bateman was among a group of journalists interviewing Malema outside the Hawks' office on Tuesday.

The EFF leader was summoned there to give a written statement about allegations that he discharged an automatic weapon during the party's 5th birthday celebrations in the Eastern Cape in 2018.

Responding to a question about an incident in which Malema allegedly got into an altercation with a security official at Winnie Madikizela-Mandela's funeral, the EFF leader responded, "A white, big white Afrikaner male, stopping me from burying Winnie Mandela? I had to be next to the coffin and no white man was going to stop me from burying Winnie.

When Bateman asked if Malema had insulted the police officer, Malema responded "I wish I assaulted him. I wish I did a real thing - proper. I regret not doing it. I should have done it so that I deal with real stuff. Me, I'm not scared, boet. Uniform or no uniform. Afrikaner or no Afrikaner. White or pink, I will deal with you decisively".

Malema then walked away and video footage showed Bateman turning and mouthing what appeared to be "f***ing p**s".

Reaction on social media was swift, with Bateman and the phrase 'p**s' trending.

Eyewitness News responded by "unreservedly apologising to the Economic Freedom Fighers leader Julius Malema for the foul language used by its reporter."

The news organisation said that Bateman was taken off air immediately after they were made aware of the video. An internal probe would be held to investigate the matter.

Responding via a statement, the EFF said, "The EWN must take concomitant action. Had it been a black journalist who would have insulted a white party leader, he would be under suspension with immediate effect. Bateman must be dealt with the same way and not be accorded the white privilege of kids' gloves."

Reaction to the matter on Twitter was varied with many questioning Bateman's ethics as a journalist, while others rallied around him.